A 1982 study of Tibetan practitioners of "g-tummo" yoga did indeed demonstrate their ability to raise the temperature of different parts of their body. 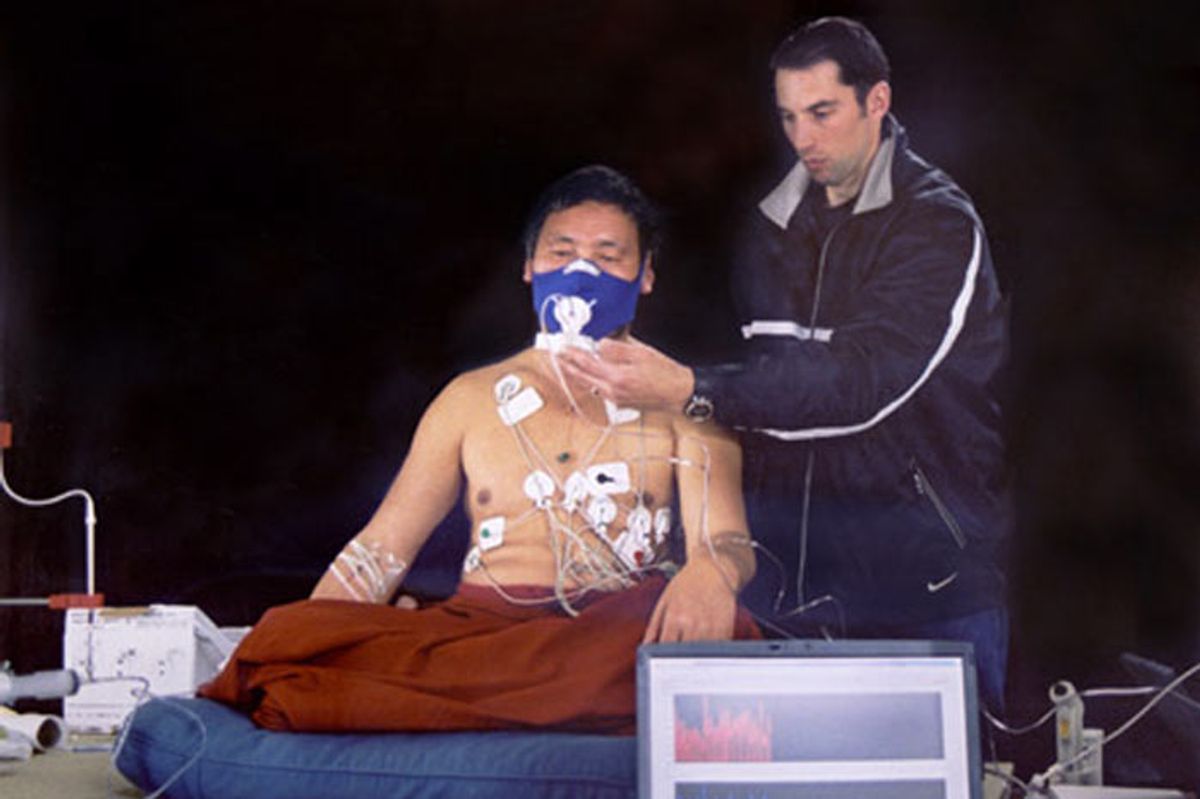 Claim:
A Harvard Study showed that Tibetan Monks can significantly raise the temperature of their fingers, toes and other extremities through meditation alone.
Rating:

In 1981, Harvard Medical School researcher Herbert Benson traveled to Tibet to meet with three Buddhist monks expertly trained in a form of yoga named g-tummo, a practice that is popularly associated with the ability to warm your body temperature through concentration. His academic interest in the practice lies in his research focus on “mind body medicine”, described in his official biography:

Dr. Benson is the Director Emeritus of the Benson-Henry Institute (BHI), and Mind Body Medicine Professor of Medicine, Harvard Medical School. At BHI, Dr. Benson continues to lead the field with research into the efficacy of Mind Body Medicine to counteract the harmful effects of stress.

The impetus for his research was to see if subjective reports of g-tummo practitioners raising their body temperature could be validated scientifically. A 2013 review of research on the topic described g-tummo as a specialized practice whose methods are known to few:

The g-tummo meditative practice targeted at controlling “inner energy” is described by Tibetan practitioners as one of the most sacred spiritual practices in the Indo-Tibetan traditions of Vajrayana Buddhism and Bon. It is also called “psychic heat” practice since it is associated with descriptions of intense sensations of bodily heat in the spine. Little is known about the specifics of the g-tummo technique. Monasteries maintaining an extensive practice of g-tummo are quite rare and located mostly in the remote Chinese provinces of Qinghai and Sichuan (also known as eastern Tibet).

Benson’s aims, as well as the results of his investigation, are described in the abstract to his study, published in Nature in 1982:

Since meditative practices are associated with changes that are consistent with decreased activity of the sympathetic nervous system, it is conceivable that measurable body temperature changes accompany advanced meditative states. With the help of H.H. the Dalai Lama, we have investigated such a possibility on three practitioners of the advanced Tibetan Buddhist meditational practice known as g Tum-mo (heat) yoga living in Upper Dharamsala, India. We report here that in a study performed there in February 1981, we found that these subjects exhibited the capacity to increase the temperature of their fingers and toes by as much as 8.3°C.

In that study, Benson concluded that “the most likely mechanism to account for the increase in finger and toe temperature is vasodilation,”—the widening of blood vessels to reduce blood pressure. A follow-up study also completed by Benson’s research group in 2000 lent some credence to this notion when they found that portions of the brain responsible for some autosomatic aspects of your body — like vasodilation — appear to be activated when subjects practiced g tummo.

All that said, other researchers feel as though the results of Benson’s research have been exaggerated in the popular media, as discussed in a 2013 study looking to reproduce the work of Benson and his colleagues:

Unfortunately, [Benson’s] findings have subsequently been distorted in reports in other sources, possibly due to confusion between Fahrenheit and Centigrade scales or lack of clear specification regarding the anatomical sites of temperature measurement, leading to general claims of temperature increases during g-tummo ranging from “… up to 15 degrees only within a few moments of concentration” to “17 degrees in peripheral body temperature”.

The findings of our research indicate that there are two distinct types of g-tummo practice, FB and GB, each characterized by different temperature patterns and neural (EEG) correlates. The temperature data bear out the practitioners’ claims that FB meditation is used to increase body heat, while GB meditation seems to facilitate the maintenance of an elevated body temperature.

They concluded that the Forceful Breath method can indeed raise core body temperatures into the mild fever range:

We were able, for the first time, to document reliable [core body temperature] increases during the FB type of g-tummo practice, all within the slight to moderate fever zone, validating the legends of the extraordinary capacity of g-tummo meditators to elevate their body temperature beyond normal. However, the results also suggest that temperature increases during g-tummo meditation are neither solely a by-product of meditation nor its goal, but instead may be a means to facilitate the achievement of “deep meditative states”.