Everyone is worried, darling. 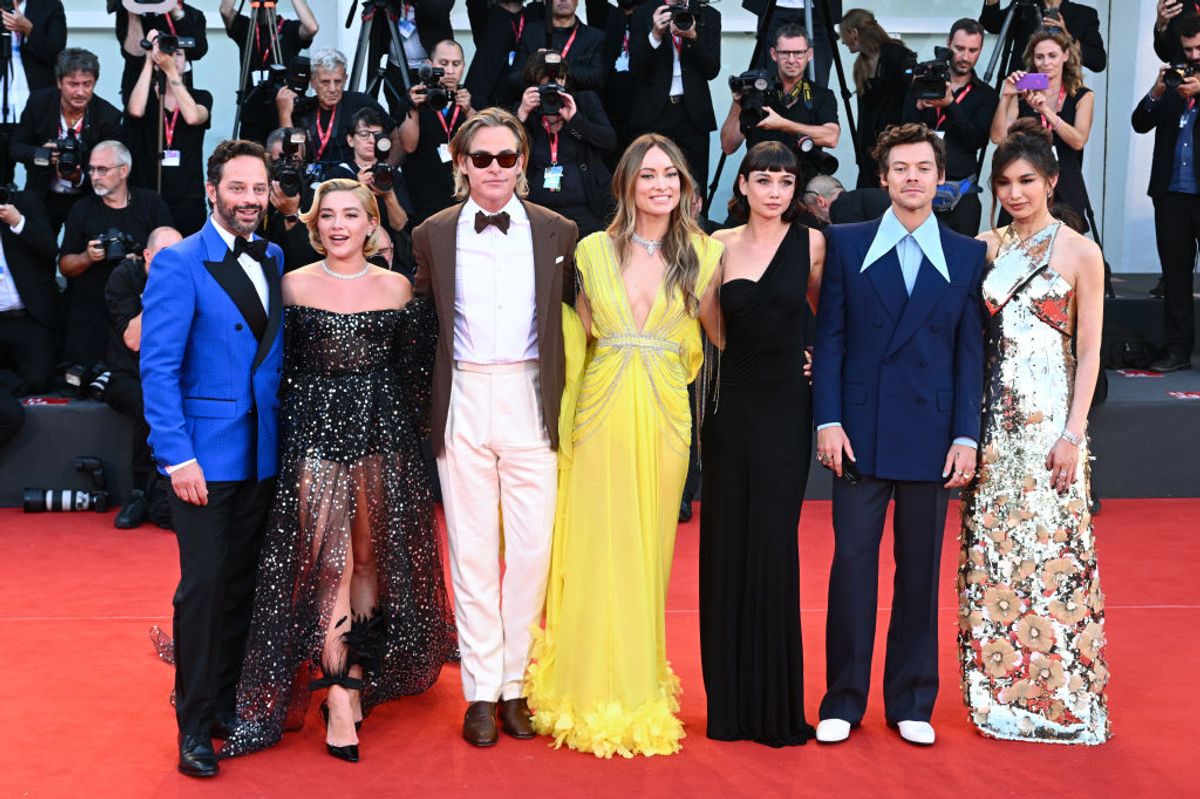 The 79th annual Venice International Film Festival brought plenty of glamor and highly anticipated movies— as well as some spit-takes. Amidst all the glitz, drama ensued surrounding the film “Don’t Worry Darling,” which culminated in some wild theories about whether singer-actor Harry Styles spat on his co-star Chris Pine at the premiere on Sept. 5, 2022.

Since promotions for director Olivia Wilde’s sophomore feature film “Don’t Worry Darling” began in the summer of 2022, gossip had spread about behind-the-scenes drama between actress Florence Pugh, Styles, and Wilde. But it was Pine, the other star of the film, who found himself at the center of the internet’s fascination when a brief moment between him and Styles went viral.

To explain the spit, we have to go back to the beginning of the drama. In sum, Wilde and her lead star, Pugh, were allegedly feuding because of reports of an on-set affair between Wilde and the other film's lead, Styles. The controversy deepened after Wilde claimed in an interview to have fired actor Shia LaBeouf from the film during production and replaced him with Styles. She said in an August 2022 interview, “His process was not conducive to the ethos that I demand in my productions.”

LaBeouf in turn rejected Wilde’s version of events, saying he quit the production and released a video message from Wilde in which she alluded to tension between him and Pugh, and seemed to attempt some form of reconciliation between them. We should note that in December 2020, LaBeouf was sued by his ex-partner, singer FKA Twigs, citing alleged assault, sexual battery, and emotional distress, and he will face trial in April 2023.

Fans speculated that Pugh had been less than enthusiastic about promoting the film on her social media accounts. She claimed filming conflicts with her other film, “Dune 2,” prevented her from participating in the news conference for “Don’t Worry Darling” in Venice. She made it in time for the red carpet, however, posing alongside Wilde and the leading cast — albeit while keeping other cast members between them in the seating arrangements and photographs, and not interacting in public with Styles or Wilde.

And it was at the premiere of the film in Venice where the supposed spit was projected around the world, fueling speculation that all was not well between the cast. In the short video clip, Pine and Wilde are seen clapping as Styles takes his seat next to Pine. Styles briefly bends over before sitting, pursing his lips and sucking his cheeks in, his head directly above Pine’s lap. Pine is clapping this whole time, but abruptly pauses, shakes his head, and smiles down at his legs. He then stops clapping to pick up his glasses that he placed between his legs before.

A video taken from behind them does not appear to show any spit coming from Styles, however:

Of course, theories abound about what actually happened:

Pine also appeared distracted at the news conference earlier that day, so internet users projeted their analyses of the drama onto his expressions:

Meanwhile, Wilde seemingly rejected the drama, heaping praise on Pugh at the news conference. "As for all the endless tabloid gossip and all the noise out there, I mean, the internet feeds itself," Wilde said in response to a question about the alleged tension. "I don't feel the need to contribute. I think it's sufficiently well-nourished."

An event with high-profile celebrities is ripe material for speculation, but ultimately it will remain speculation unless an involved party comments on the matter.

On Sept. 6, 2022, a representative for Chris Pine rubbished the rumor: "This is a ridiculous story — a complete fabrication and the result of an odd online illusion that is clearly deceiving and allows for foolish speculation,” Pine’s representative told Variety. “Just to be clear, Harry Styles did not spit on Chris Pine. There is nothing but respect between these two men and any suggestion otherwise is a blatant attempt to create drama that simply does not exist.”

We thus rate this claim as "False."