Did Harrison Ford Really Improvise Han Solo's 'I Know' in 'The Empire Strikes Back'?

The pivotal line comes right before Han Solo is frozen in carbonite. 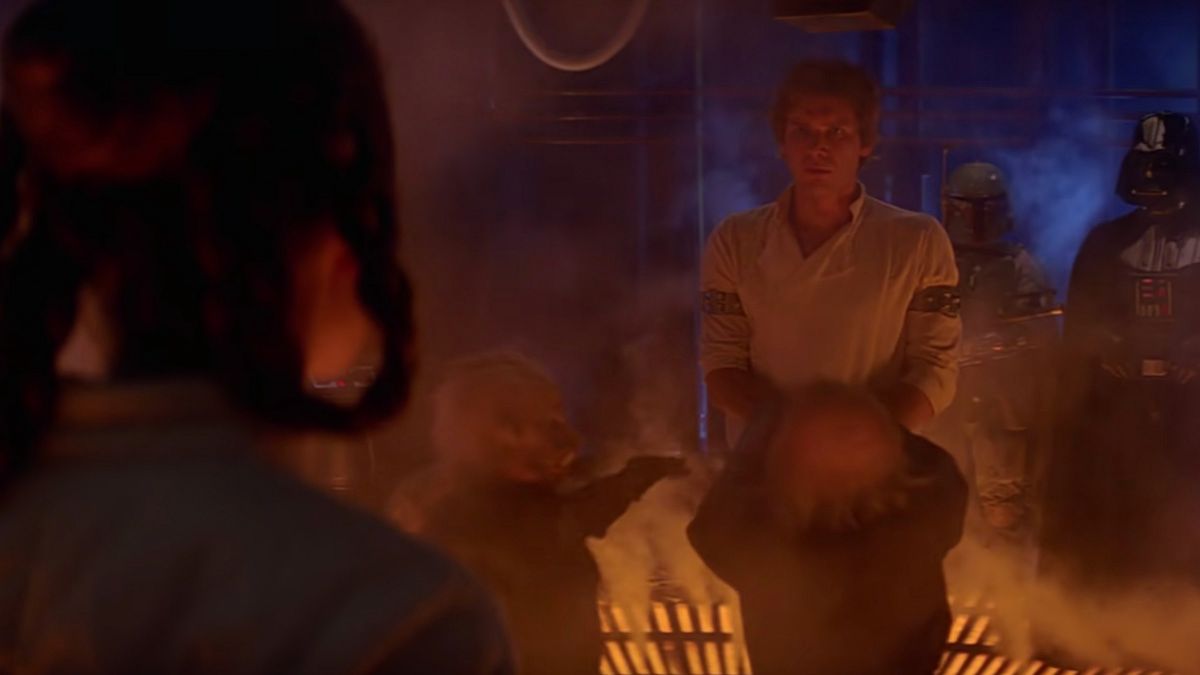 Harrison Ford as Han Solo improvised his line I know to Carrie Fisher's Princess Leia instead of saying I love you too in Star Wars Episode V The Empire Strikes Back. (Image Via Lucasfilm Ltd./The Walt Disney Company)

On Nov. 20, 2021, Twitter user @delaneykingrox tweeted that film actor Harrison Ford improvised "I know" to Carrie Fisher's "I love you" in 1980's "Star Wars: Episode V - The Empire Strikes Back," just before his character, Han Solo, is frozen in carbonite. She also claimed that the originally scripted line for Solo to respond to Princess Leia was, "I love you too."

She tweeted the thread to talk about "on the nose" dialogue, which she defined as "communicating what is obvious to the audience with no subtly or subtext."

There are a number of rumors out there about "The Empire Strikes Back" that aren't true. For example, there's the fake audience reaction sound recording from 1980 that's received nearly 10 million views on YouTube. (A video with genuine audience reaction audio from 1980 does exist, but it only had several thousand views.)

As for this fact check, it's true that Ford improvised Solo's line, "I know," in "The Empire Strikes Back," and that the originally scripted line was, "I love you too." While many fans might debate that the trophy for the best line in the franchise would go to Darth Vader's "I am your father," there would perhaps also be a handful of people who would vote for Solo's "I know."

In a 2011 sitdown with "Cowboys and Aliens" director Jon Favreau, Ford explained that he wasn't a fan of "I love you too," which was the original line in the "Empire Strikes Back" script from story creator George Lucas. Leigh Brackett and Lawrence Kasdan also drafted the screenplay. Lucas also served as an executive producer on the film but did not direct it. The film was directed by Irvin Kershner.

In the interview, Ford called Lucas "a powerful producer at the time," after the success of "American Graffiti" and "Star Wars Episode IV: A New Hope."

"George had artfully contrived for Han Solo to say, 'I love you too,'" Ford said. However, the actor called it a "lost opportunity" and told Favreau: "You want your badasses to be a badass until the end."

On the set of the film, Ford said he asked a question of Lucas and perhaps other members of the cast and crew. "What's the last thing a woman wants to hear when she says, 'I love you'? She says 'I love you,' and I say... 'I know.'"

According to Ford, they shot one take with the line, "I love you too," but said it was "just for protection." That recording has never been made public.

"We shot one just for protection where I spoke the line as written," Ford said. "And George, I think, this is fair enough to say, he went apeshit. He thought it was horrible and that it would get a bad laugh. So I was obliged to sit next to him when he tested it for the first screening. There was a laugh, but it was a laugh of recognition. And so, he generously let it stay in the movie." In a separate interview that appeared to be recorded years before 2011, Kershner remembered that there were perhaps more takes with either the "I love you too" line or "I know," but didn't specify which one.

In sum, yes, Ford improvised Solo's "I know" that was spoken in response to Leia's "I love you" in "The Empire Strikes Back," an exchange that perhaps could be considered as a pivotal scene in one of the most beloved onscreen love stories of all time.