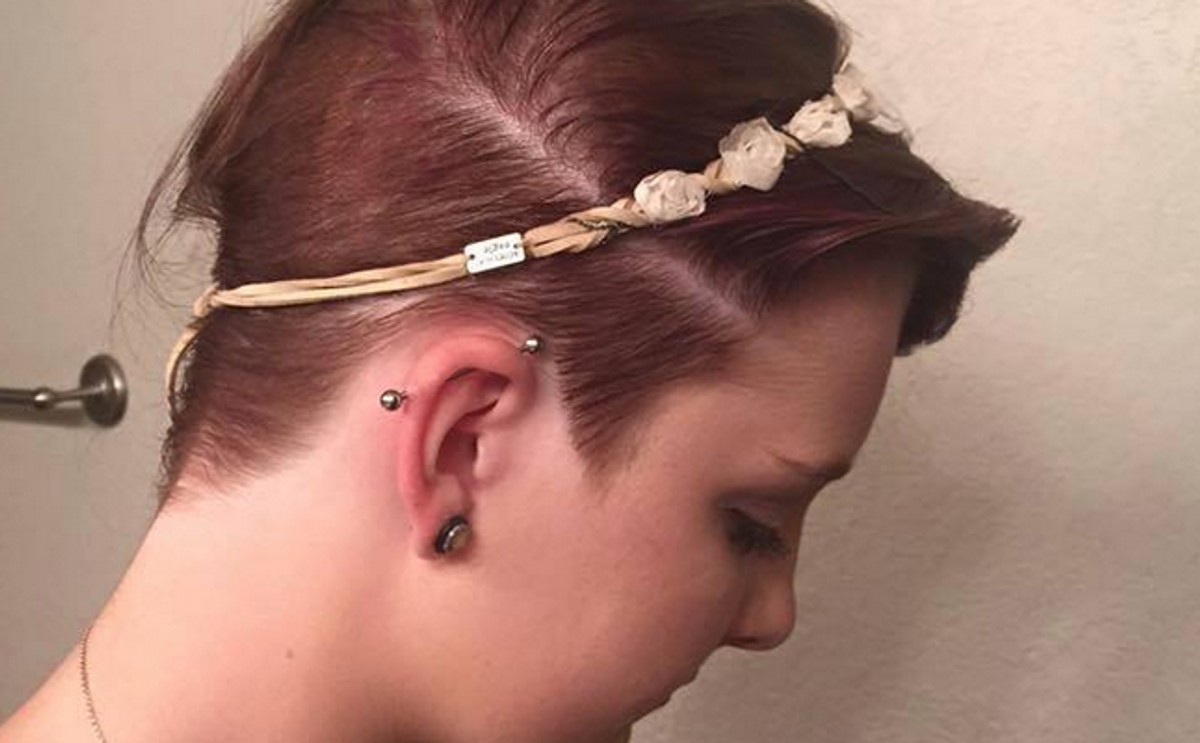 FACT CHECK:   Was a Harker Heights High School student mistreated after a fellow student destroyed her hair with super glue?

Claim:    A Harker Heights High School student was mistreated after a fellow student destroyed her hair with super glue.

To Whom it may concern;

My name is Hannah. I'm not any different than your son or daughter. I go to Harker Heights High School, have friends, study hard, and I'm involved in after school activities. Well my thoughts about how I was going to spend my first year of high school changed drastically on Monday, September 14th, 2015. I was standing out front of the school and a boy decided to put a handful of super glue into my hair and on my scalp. He had previously told another boy that he was going to put it in a girls hair while he poured it into his hand. The super glue BURNED and I couldn't help but cry. My dad had to pick me up from school and at the time that he picked me up the school wasn't doing ANYTHING about this boy, until my dad told them to or he would call 911. I had to be taken to Urgent Care so they could remove the glue from my scalp, which gave me a chemical burn (this took a 1/2 hour!). I kept thinking the whole time "What did I do to deserve this?". Later in the evening my mother and I were attempting to remove the glue from the rest of my hair, which hurt horribly. We ended up having to shave 1/2 of my head because the glue was so bad. The boy had ISS for a couple of days and today I had to call my dad because he was there and I have a class with him. I was in tears!

My dad came to pick me up and he was upset of course. He got his sticker when you sign in at the office, he signed me out and the officer wouldn't let him take me home. My dad told me to come on and the officer told me to stay right there. The officer gave my dad a criminal trespass warning and told him that if he came back on campus that he would be arrested. I was finally able to go with my dad after he was in the parking lot and asking over and over "Where is my daughter?". The criminal trespass warning was told to happen by the principal. How come I have to be treated like the criminal and the person who caused me harm get's to walk around like nothing happened? THIS IS HOW KISD TREATS CHILDREN AND FAMILIES! PLEASE SHARE SO THIS DOESN'T HAPPEN TO SOMEONE ELSE!!!!! Origins:   On 18 September 2015, Facebook user Jessica Grimmer published the text and photographs excerpted above, pertaining to an alleged assault involving a female student named Hannah and an unnammed male student at Harker Heights High School in Harker Heights, Texas. In an earlier (and far less popular) Facebook post, Grimmer identified herself as Hannah's mother and reported that Hannah (a freshman) was standing outside of the school building on 14 September 2015 when an unnamed male student forcibly applied superglue to her hair and scalp.

Grimmer indicated that Hannah's father arrived and demanded action, but whether any action was taken on the part of the school at that time was not stated. Hannah's mother shared additional photographs of the girl at an urgent care clinic and afterwards, with half of her head shaved. On a separate day, Grimmer said that the boy was reinstated to his classes with Hannah following a brief period of in-school suspension (commonly abbreviated to "ISS") even though the forced contact was described as so upsetting to Hannah that she called her father to pick her up.

After that, Grimmer said, adults involved on the school's end became adversarial. At some point after Hannah's father arrived, an officer initially refused to release the child and allegedly issued a warning barring the father from campus. In her follow-up post with the urgent care photographs, Grimmer addressed doubts about the tale and urged social media users to contact Killeen Independent School District (KISD) regarding the incident:

It has been brought to our attention that the validity of Hannah's story is in question by some. Rest assured that there wouldn't be a post like this if it weren't accurate because I am a private person. So to make a public post that opens my family up to the world was a big choice on our part. If there are any parents who's child attends Harker Heights High and would like to voice their concerns, or check the validity you can reach the Principal, Larry Brazzil at: [redacted]. Parents, just be aware that there is an assailant walking the halls freely. Also the superintendent is, John Craft and can be reached at: [redacted]. His email is: [redacted]. Attached are the pictures of Hannah's hair when she was in Urgent Care, after Urgent Care (where they removed the glue from her scalp), and when she was having her head shaved.

Grimmer also encouraged social media users following the story to follow the page Justice for Hannah, which published an update that read:

We received a phone call stating that this matter has been addressed and Hannah will be safe at school. We can't say specifics due to them being minors, but this is a step in the right direction. We will see how tomorrow goes. Keep up the fight against bullying!! Thanks for all of the support.

Among comments on Grimmer's post were ones added by an individual identified by others as the boy's aunt. Although those posts were deleted, commenters shared screenshots of what they said were counterarguments levied by the boy's relatives, who maintained that the incident was an accident with no malicious intent: Grimmer's account made no mention of the purported altercation referenced by the boy's relatives, it did not describe the degree of injury Hannah suffered beyond "burns" (which weren't visible in the photographs), and it did not relate the events leading up to Hannah's father being banned from campus.

The Killeen Independent School District (KISD) had not publicly addressed the claims as of 21 September 2015. We have contacted the district to determine which (if any) details of the incident they can confirm or deny.