Is This What Happens When You Park in a Handicapped Parking Spot in Brazil?

A video showing the creative shaming of a motorist who illegally parked in a handicapped spot was created by the YouTube comedy team Canal Boom. 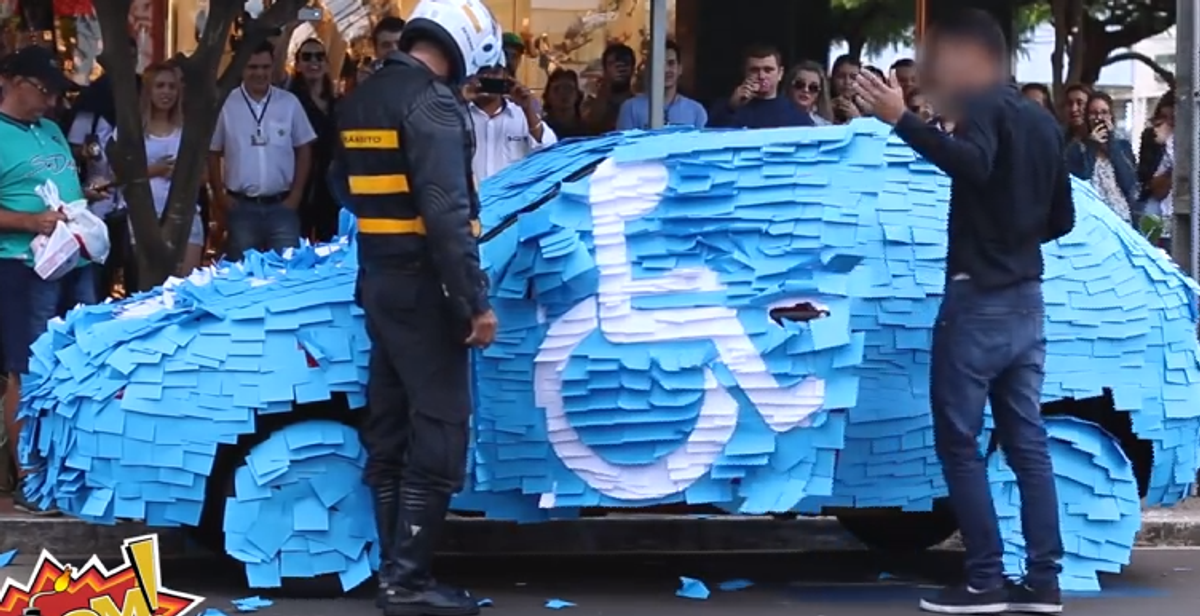 Claim:
A video shows a group of citizens teaching a lesson to person who parked illegally in a handicapped parking spot.
Rating:

A video purportedly showing a group of Brazilian citizens shaming a person who illegally parked his vehicle in a designated handicapped parking space by covering his car in Post-It notes has frequently been posted online under the title "This Is What Happens When You Park in a Handicap Spot in Brazil." The common version of the video begins with a motorist's discovering that his car has been covered in Post-It notes that recreate the handicapped parking space symbol and angrily scraping them off his vehicle while a policeman blithely looks on. This version implies that the prank seen in the video was pulled off by some bystander (or bystanders) who spontaneously punished an illegal parker they just happened to come across.

However, the clip actually originated with the Brazilian YouTube comedy channel "Canal Boom," and the original version, titled "Vaga Para Deficiente 2" (i.e., "PRANK: Disabled Parking 2"), opens with an introduction from the pranksters and shows a coordinated team of at least five people covering the vehicle with Post-It notes:

It's unclear whether this video truly depicts a group of pranksters shaming a random illegal parker, or whether it was a staged event (with the seemingly irate driver being in on the gag). For the pranksters to successfully complete their stunt as shown, they would had to have known that the victim would be away from his car long enough for them to complete the fairly lengthy process of completely covering it with Post-It notes, and that no one would alert him to the fact that people were messing with his vehicle. Also, the policeman who arrives on the scene while the event is in progress seems curiously uninterested in stopping the pranksters from defacing a car or citing the driver for parking illegally, and he heedlessly allows the motorist to drive off in a vehicle that has dangerously obstructed windows and is trailing litter all over the street. If this stunt wasn't a staged one, it likely would have required a number of different attempts to obtain the desired results for the camera.