Is There a 'Hammer and Scorecard' Operation to Manipulate Vote Counts?

The director of the U.S. Cybersecurity and Infrastructure Security Agency (CISA) called the rumors "nonsense." 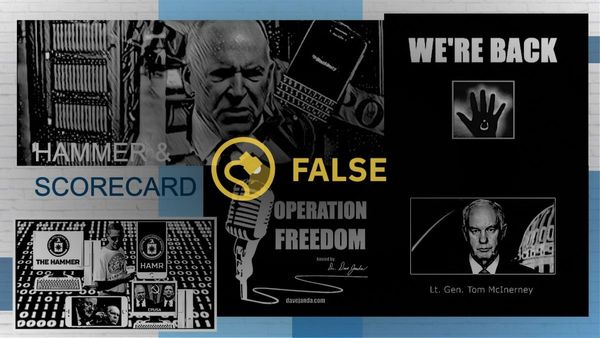 Claim:
A supercomputer called "Hammer" and a software program called "Scorecard" are being used to alter vote counts in the U.S. presidential election of 2020.
Rating:

In the days after news outlets called the 2020 U.S. presidential election and projected that Joe Biden would be the 46th president of the United States, the internet was flooded with various unfounded claims about voter fraud. One popular rumor concerned something called "Hammer and Scorecard." While this rumor was wide ranging, it basically held that a "deep state" supercomputer named "Hammer" and a computer program called "Scorecard" were being used to alter vote counts.

We'll take a closer look at this rumor in the article below. But before we do, we should note that Christopher Krebs, the director of the Cybersecurity and Infrastructure Security Agency (CISA) in the U.S. Department of Homeland Security — a position he was nominated to in 2018 by U.S. President Donald Trump — has called the "Hammer and Scorecard" rumors "nonsense":

Rumors about the existence of a CIA supercomputer called HAMR (or commonly, "Hammer") can be traced to a man named Dennis Montgomery. According to the website American Report, Montgomery, whom the website describes as a "CIA contractor-turned-whistleblower," designed and built this supercomputer.

An article published on American Report in October 2020 claimed that U.S. President Barack Obama commandeered this supercomputer shortly after taking office in 2009, used the "Scorecard" program to steal the election in 2012, and that this program was being deployed again to steal the election for Biden in 2020. There are many reasons to take these claims with a hefty dose of salt. For example, the article does not explain, among one of its many plot holes, why this program was not used in 2016 to steal the election for Hillary Clinton, or why President Donald Trump, who has held office for the last four years, did not do more to secure our elections from Hammer and Scorecard in 2020.

The fact-checking website Lead Stories also notes that some of the specifics in the American Report article don't hold up to scrutiny. For example, American Report claims that Scorecard works by tampering with "transfer points" between state computers and third-party election data vaults. The article claims that "VR Systems Inc" is one of these transfer points, but VR Systems' COO told Lead Stories that "VR Systems does not do voter tabulation and is not connected to county or state voter tabulation systems."

But perhaps the biggest red flag is this story's source, Montgomery.

What Trump allies tend to leave out, however, is that Montgomery has a long history of making outlandish claims that fail to come true. As an intelligence contractor at the height of the War on Terror, Montgomery was behind what’s been called “one of the most elaborate and dangerous hoaxes in American history,” churning out allegedly fictitious data that once prompted the Bush administration to consider shooting down airplanes.

And now, Trump allies want voters to believe Montgomery’s claims about the election.

In 2006, Montgomery claimed that he had emails showing that Nevada Gov. Jim Gibbons was guilty of bribery. According to USA Today, the Justice Department cleared Gibbons of wrongdoing after a computer expert cast doubt on the authenticity of the emails that had been provided by Montgomery.

Gibbons, who was elected governor in 2006 after five terms in Congress, had steadfastly denied any wrongdoing despite claims by Dennis Montgomery that eTreppid Technologies LLC founder Warren Trepp lavished Gibbons with money and a Caribbean cruise in exchange for help winning contracts for his company.

Montgomery's credibility was put in doubt after a computer expert questioned the authenticity of e-mails Montgomery claimed proved Gibbons was accepting gifts.

Montgomery was also accused of deceptive practices in 2014 when he claimed to have evidence of a conspiracy against Arizona Sheriff Joe Arpaio. U.S. District Court Judge G. Murray Snow found that Montgomery's evidence amounted to "junk," and Arpaio agreed.

When Judge Snow suggested that the materials provided by Mr. Montgomery were “junk,” Deputy Sheridan and Sheriff Arpaio agreed.

[Montgomery's] reputation, easily uncovered with a cursory search, includes ample allegations of deception. Federal officials came to believe that he had sold antiterrorism technology that proved to be a hoax. He has denied wrongdoing in a lawsuit.

In 2007, he falsely accused the governor of Nevada at the time, Jim Gibbons, of having received kickbacks from Mr. Montgomery’s former employer to help it secure secret federal defense contracts. Two years later, Mr. Montgomery was arrested on charges that he had written $1 million in bad checks at a Las Vegas casino. A court hearing is scheduled for Aug. 12. He filed for personal bankruptcy that year, over mounting gambling debts.

“This guy hired a person previously found to be a con man,” said Dan Pochoda, senior counsel for the American Civil Liberties Union of Arizona, which represents the plaintiffs in the case against Sheriff Arpaio.

Here's a PBS report about some of Montgomery's fraudulent claims:

Despite Montgomery's history of deception, his claims about Hammer and Scorecard transitioned from the fringes to the mainstream when Fox News' Lou Dobbs interviewed Sidney Powell, the attorney for former Trump national security adviser Michael Flynn, on Fox Business.

“I think there are any number of things they need to investigate, including the likelihood that 3 percent of the vote total was changed in the pre-election voting ballots that were collected digitally by using the Hammer program and the software program called Scorecard. That would have amounted to a massive change in the vote.”

Hammer and Scorecard in Action?

The Director of CISA has dismissed the claims about Hammer and Scorecard altering vote counts, and these rumors originate with a man who has a long history of making deceptive claims. Still, social media users quickly found "evidence" that Hammer and Scorecard was real, and that it was truly being used to steal the 2020 election. In November 2020, a video started to circulate on social media that supposedly showed "SCORECARD working in real time."

In this video, it’s easy to see SCORECARD working in real time.

Hammer and ScoreCard switched 19,958 votes live on TV from Trump to Biden in the Pennsylvania Presidential Race!

It returns to Pennsylvania at the 00:40 mark, and pay close attention here.

The above-displayed video does show a genuine clip from CNN. However, it is not evidence of wrongdoing. In fact, what this video shows isn't even very unusual. CNN, like most news networks, uses data from the National Election Pool to provide real-time election results during their coverage.

The NEP is a consortium of major news networks — ABC, CBS, CNN and NBC — that pools together resources to gather vote and exit poll data. The NEP works with the consumer research firm Edison Research to collect timely and comprehensive election data on Election Day and in the following days, weeks and months until results are certified by all states. The NEP licenses data to several news outlets, including Reuters and The New York Times, among others.

The above-displayed video shows a momentary error in these real-time results. A source from CNN told us that this video showed a brief moment when the results were incorrectly transposed from the NEP and that this human error was caught, flagged, and quickly fixed (as shown in the video). This video is not evidence of a supercomputer hacking into the U.S. election system and altering vote counts. It's a video showing a momentary error that was quickly fixed thanks to the numerous safeguards in place to protect the integrity of elections.

CISA Director Kreb's message about the Hammer and Scorecard rumors bears repeating: "Robust safeguards including canvassing and auditing procedures help ensure the accuracy of official election results," and that it is not true that a "bad actor could change election results without detection."

Rumor: A bad actor could change election results without detection.

Get the Facts: The systems and processes used by election officials to tabulate votes and certify official results are protected by various safeguards that help ensure the accuracy of election results. These safeguards include measures that help ensure tabulation systems function as intended, protect against malicious software, and enable the identification and correction of any irregularities.

Every state has voting system safeguards to ensure each ballot cast in the election can be correctly counted. State procedures often include testing and certification of voting systems, required auditable logs, and software checks, such as logic and accuracy tests, to ensure that ballots are properly counted before election results are made official. With these security measures, election officials can check to determine that devices are running the certified software and functioning properly.

Every state also has laws and processes to verify vote tallies before results are officially certified. State processes include robust chain-of-custody procedures, auditable logs, and canvass processes. The vast majority of votes cast in this election will be cast on paper ballots or using machines that produce a paper audit trail, which allow for tabulation audits to be conducted from the paper record in the event any issues emerge with the voting system software, audit logs, or tabulation. These canvass and certification procedures are also generally conducted in the public eye, as political party representatives and other observers are typically allowed to be present, to add an additional layer of verification.