Do These Photographs Show a Hamas-Organized Wedding of Men and Young Girls? 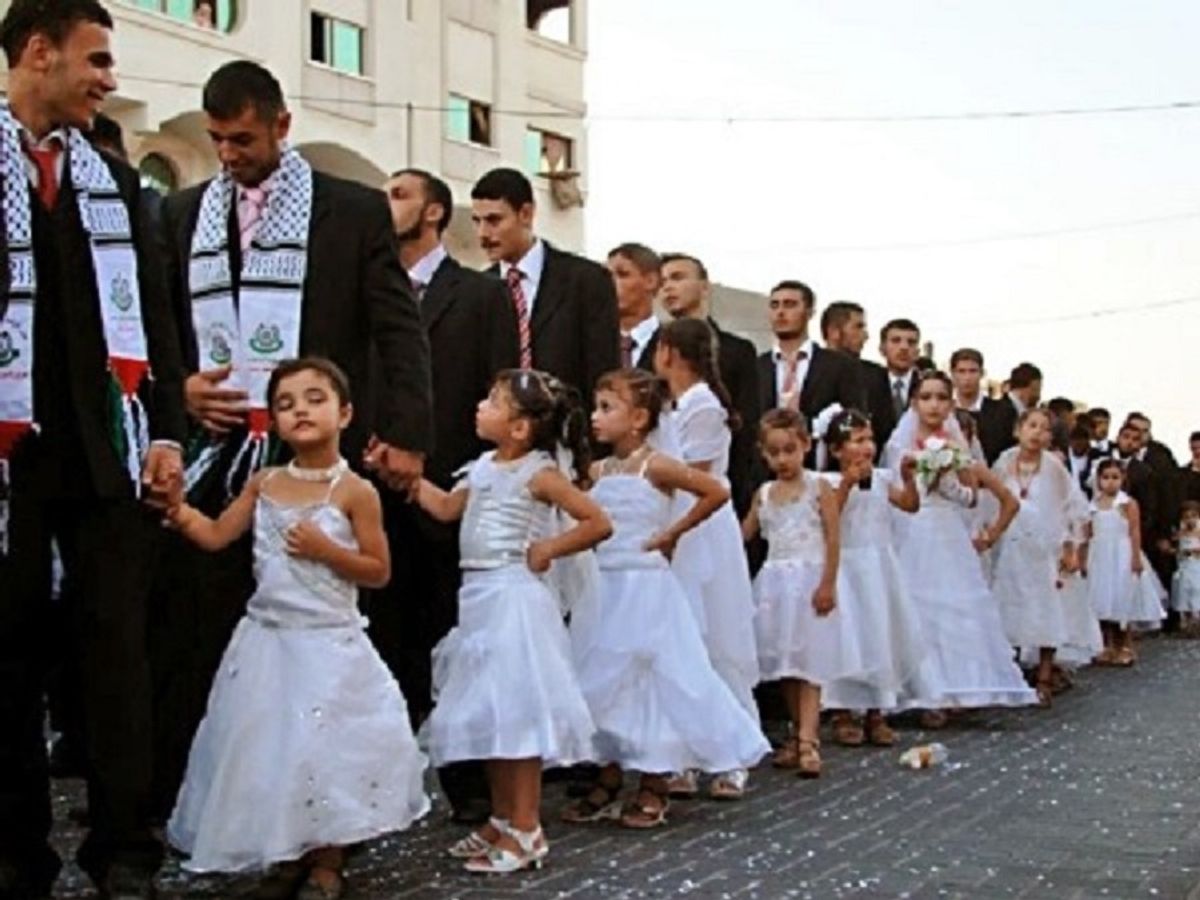 As documented in various news accounts, mass weddings of Palestinians organized by Hamas, involving hundreds of couples per event, have been a common occurrence in recent years in the Gaza Strip. For example, an October 2008 Times article reported:

The grooms were resplendent in white shirts while the brides all wore black. At a sports stadium one recent October evening, thousands of married couples along with relatives and friends — gathered for a mass wedding celebration, the 10th here this year courtesy of Hamas.

Hamas has been observing a truce with Israel, allowing its underground fighters to resurface but leaving them without much to do. At the same time, hundreds of the group's women have been recently widowed, their husbands having been killed either in confrontations with Israel or in the fighting between Hamas and its secular rival, Fatah.

Taking advantage of the pause in violence, the Hamas leaders have turned to matchmaking, bringing together single fighters and widows, and providing dowries and wedding parties for the many here who cannot afford such trappings of matrimony.

About 300 Qassam members, mostly in their 20s, signed up with their new wives for the most recent celebration, held at a sports stadium in the Tuffah district, east of Gaza City. Local mosques spread the word about the event and offered to help find spouses for single men whose families had not yet managed to arrange them a match.

Although Hamas has long organized joint weddings, it is now doing so with more verve, placing special emphasis on remarrying its war widows.

Likewise, a 2009 Agence France Presse (AFP) report described a similar event in July of that year:

Nearly a thousand Palestinians celebrated marriage in a ceremony organised by Hamas in the north of the Gaza Strip.

Hamas dignitaries including Mahmud Zahar, one of the militant group's top leaders, were on hand to congratulate who took part in the carefully stage-managed event.

"We are saying to the world and to America that you cannot deny us joy and happiness," Zahar told the men, all of whom were dressed in identical black suits and hailed from the nearby Jabalia refugee camp.

"We are presenting this wedding as a gift to our people who stood firm in the face of the siege and the war," local Hamas strongman Ibrahim Salaf said in a speech.

Photographs and video from the latter event were quickly circulated via accompanied by commentary asserting that most (or all) of the brides at the wedding were actually girls" who, despite being under ten years of age, were being married off to men in their mid- to late-twenties (an impression created in large part because the older women who were the real brides were not visibly evident in those images):

Muhammed married a six year old bride. But Islam has evolved in 1500 years. In Hamas land, in 2009, the brides are almost seven.

A gala event has occurred in Gaza.

Hamas sponsored a mass wedding for four hundred and fifty couples. Most of the grooms were in their mid to late twenties; most of brides were under ten.

Muslim dignitaries including Mahmud Zahar, a leader of Hamas, were on hand to congratulate the couples who took part in the carefully staged celebration.

"We are saying to the world and to America that you cannot deny us joy and happiness," Zahar told the grooms, all of whom were dressed in identical black suits and hailed from the nearby Jabalia refugee camp.

Each groom received a gift of 500 dollars from Hamas.

"We are presenting this wedding as a gift to our people who stood firm in the face of the siege and the war," local Hamas strongman Ibrahim Salaf said in a speech.

The wedding photos tell the rest of the sordid tale. Although the photographs and video footage did originate with the July 2009 mass wedding event, and they do show girls dressed in clothing resembling bridal garb holding hands with older men, the young girls in these pictures were not being married off to adult males; they were relatives of the brides and grooms (typically nieces and cousins ranging in age from three to eight years old) who were merely ancillary participants in the ceremony, performing a function similar to that of flower girls in western-style weddings.

Even though news accounts documented they were undeniably present, the older women who did get married that day weren't apparent in the recorded images because, unlike the style of weddings most westerners are accustomed to, brides don't take center stage at this type of event:

The 450 brides shared none of the glamour, taking seats among the audience of around 1,000 party guests: most couples had already taken part in religious ceremonies elsewhere, with more marriages planned for the next few days.

The brides and grooms were separated during the wedding party since observant Muslims are not supposed to mix in public.

None of the news accounts that reported this story made any reference to the brides in these mass wedding ceremonies being only ten years old or younger, a circumstance so unusual to western readers that it surely would have been mentioned had it been true. Moreover, accounts from officials present at the event confirmed none of the women married that day was younger than 16, and most of them were adults (i.e., over 18) by western standards:

Ahmed Jarbour, the Hamas official in Gaza responsible for social activity, [said] the youngest girl to marry at the ceremony was 16 years old. He said most brides were above the age of 18.

[Jarbour] explained the minors seen in the video [walking down the aisle with the grooms] were family of the bride or groom. He said it was tradition for little girls to dress in gowns similar to the bride.

A review of the video found some of the little girls, speaking in Arabic, state they are at the wedding of a family member. The girls interviewed do not say anything about themselves getting married.

Multiple calls to Palestinians who participated in the wedding affirmed the little girls are not themselves the brides.

Tim Marshall, a reporter who covered the event for Sky News, later posted a denunciatory blog entry condemning the Internet-circulated claims of "child brides" as nothing more than uninformed, scurrilous rumor-mongering:

The men and women are sitting. Then the fireworks explode, the cheering begins, and in march the Hamas scouts, bashing drums, looking every inch the future Hamas fighters many will be. Then the grooms, aged about 18 to about 28. They are holding hands with their young nieces and cousins, little girls aged from about 3 to 8, made up to the nines, wearing white wedding dresses.

Up they all go to the stage, the cheering and music grows ever louder. The girls were having the time of their lives, but, getting a little bored after a while, came down off the stage to dance with each other and play games.

Our report on this [wedding event] put it into context, saying that it took place just a mile from the Israeli border and was a message from Hamas about its strength confidence and future fighters. Oh, and that the brides were elsewhere. Pretty straightforward.

It never struck me for a moment that the little girls might later be described in the bloggersphere as the brides! How naive I am.

Dozens, and I mean dozens, of websites took the video of the event and wrote lurid stories about Hamas mass paedophilia with headlines about brides', and endless copy about how disgusting this was, how it showed how depraved Islam is, et al, ad infinitum. Site after site jumped on the story, linking from one totally wrong load of rubbish to the next.

It showed how much some people want to believe nonsense like this, as it reinforces their prejudices, always a comfortably fun thing to do. But Hamas, and the jihadists do enough terrible things without having to make things up about them. Most of the stuff I read was outright, unthinking, gleeful, Islamophobia from people who clearly knew nothing about Arab popular culture. It's as if they really believe that because there are [real] examples of child brides, it means all weddings are with child brides.

Who would you believe, the reporter who went to the event, or a desperately poor version of citizen journalist, sitting at home, making things up, not checking anything, and either unknowingly or deliberately, writing hysterical anti Islamic nonsense?