An Ohio Republican candidate recycles a misrepresentation of the border used by President Donald Trump. 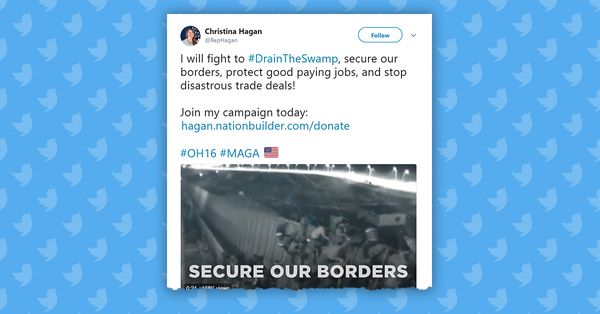 The commercial contains footage of a crowd of immigrants crossing over a wall, alongside the words "SECURE OUR BORDERS": The area shown is not identified. As the footage plays, Hagan — who serves in the state House of Representatives — can be heard saying:

I'll fight to secure our borders. We must stop the flow of drugs and illegal immigrants into this country.

But the footage does not show the U.S.-Mexico border; instead, this is footage aired in May 2014 on an Italian network, RepubblicaTV, of Moroccan immigrants crossing into the Spanish city of Melilla, which is located in northwest Africa and near Morocco.

The footage was also used in January 2016 to promote then-candidate Trump's run for the GOP presidential nomination.

His spokesperson at the time, Hope Hicks, said of the video:

The use of this footage was intentional and selected to demonstrate the severe impact of an open border and the very real threat Americans face if we do not immediately build a wall and stop illegal immigration. The biased main stream media doesn't understand, but Americans who want to protect their jobs and their families do.

But the idea of an "open border" teeming with immigrants from Mexico runs counter to data; the Pew Research Center found in 2015 that more of them were leaving the U.S. compared to the amount of immigrants entering the country. Deportations also rose, statistically, during former President Barack Obama's administration, but that was due in part to a change in the definition of "deportation" that originated while his predecessor, George W. Bush, was in office.

During his campaign, Trump accused Mexico of sending "rapists" and "drugs" to the U.S. and vowed that it would pay for a "border wall" (ignoring the fact that there is already a wall at the border). That promise spawned several dubious allegations online, including photographs used to falsely accuse Mexico of having its own "wall" on its southern border.

Hagan is running in the GOP primary in Ohio's 16th Congressional district. Current Rep. Jim Renacci, who is also a Republican, is leaving the seat to pursue a run for the Senate. We contacted her campaign seeking comment on the campaign ad.