It is not unusual for leaders of countries to draw crowds of political opponents when they visit foreign regions. 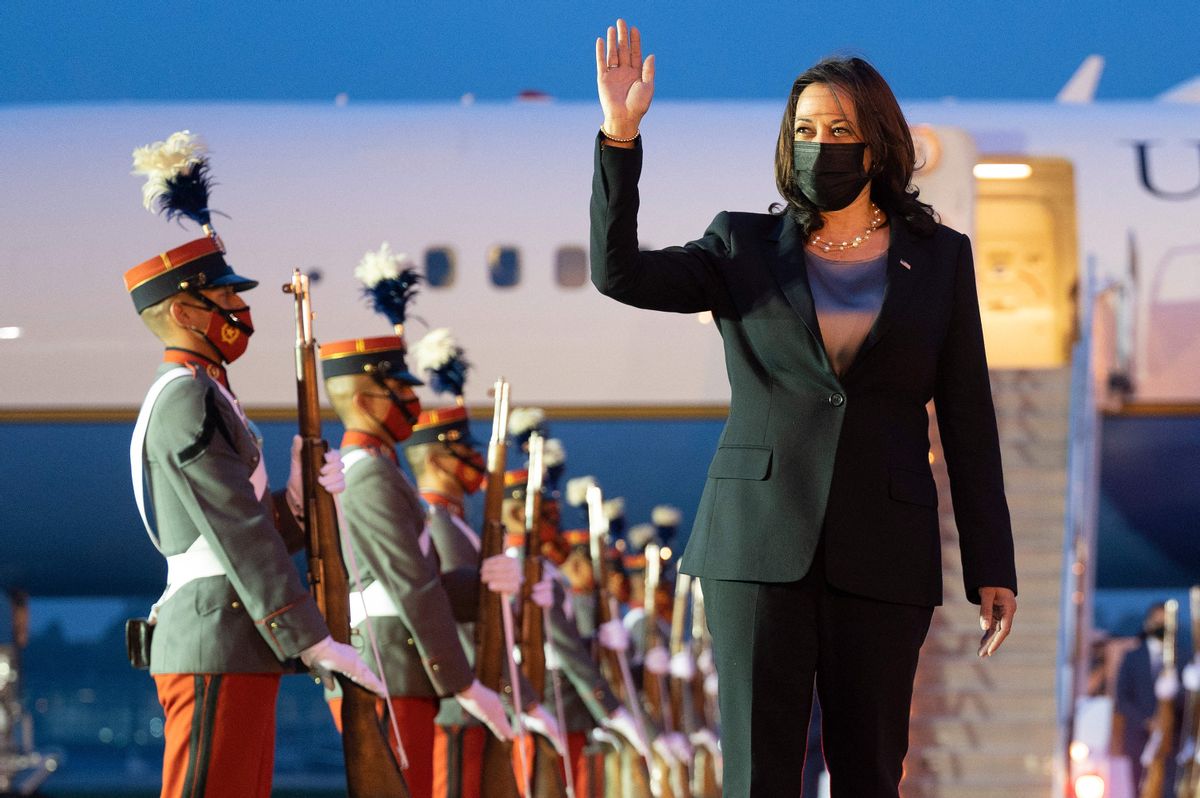 Claim:
On June 6, 2021, U.S. Vice President Kamala Harris arrived to Guatemala City's Air Force Base where she was "greeted" by protesters with banners reading, "Kamala, Trump Won," among other phrases.
Rating:

The exact size of the protest remained unknown. Photographs by Getty Images depicted a few dozen people. Additionally, while the demonstration was indeed at the Air Force Base where Harris' flight landed, it was unknown whether she was aware of the protest or saw it. Therefore, it was erroneous to frame it as a "greeting."

In early June 2021, Kamala Harris traveled to Guatemala and Mexico for her first foreign trip as U.S. vice president.

She began the visit in Guatemala City, landing on June 6 (a scene depicted above in the featured image of this report). The following day, she met with Guatemalan President Alejandro Giammattei and held a news conference in which she addressed the spike in migration to America.

Meanwhile, tabloids and Harris' critics claimed a group of Guatemala residents protested her trip by displaying signs attacking her politics and perpetuating the repeatedly debunked conspiracy that former president Donald Trump had actually won the 2020 election, not Joe Biden and Harris. (See here for a series of fact checks examining that claim.)

For example, conservative provocateur Terrence Williams made the allegation by sharing video footage that he framed as evidence of Guatemalan residents holding banners reading, "KAMALA Mind Your own Business," "KAMALA Go Home," and "Kamala, TRUMP WON," presumably in a place where she could see them. While Williams' posts cited the New York Post as the footage's source, it was actually unknown who, or what, recorded the scenes firsthand and edited them together for mass distribution on social media.

The New York Post credited Twitter user @elnuevoestado — who, we had discovered, actually shared the video from another account titled @beingrealmac. More than 10,600 users followed that latter account, which shared content that framed Biden as mentally unfit for the White House and attacked prominent left-leaning American politicians.

On June 6, however, Republican political consultant Javier Manjarres authored a page on his website (called "The Floridian") that included several photos of protesters holding banners including those depicted in the above-mentioned video clip.

Manjarres (who, in 2018, ran an unsuccessful congressional campaign to represent Florida's Fort Lauderdale area) claimed the pictures were taken at the Guatemalan Air Force base in the moments before Harris' flight had landed there to start her series of public events.

No captions accompanied those photographs, so it was unclear whether Manjarres had taken them himself or, if not, how he gained access to them. We emailed him, and we are waiting on a reply.

In addition to that visual evidence, however, we obtained the below-displayed photo by Getty Images photographer Johan Ordonez via the agency's database of photojournalism. The photo's caption substantiated Manjarres claim — that the protest took place at the Air Force Base in Guatemala City before Harris' arrival on June 6. About one dozen other Getty photos depicted the scene. People take part in a demonstration against the visit of the United States Vice-President Kamala Harris, outside the Air Force Base in Guatemala City, on June 6, 2021. - The Vice-President of the United States, Kamala Harris, arrives in Guatemala this Sunday, on her first trip to Latin America, to address issues related to the growing migration to her country and the fight against corruption. (Photo by Johan ORDONEZ / AFP)

In other words, it was "True" that a group of Guatemalan residents gathered for a demonstration to protest her visit on June 6 and displayed signs reading phrases such as, "KAMALA Go Home" and "Kamala, TRUMP WON." However, based on the available evidence, the size of the protest was unknown, as well as its duration. A few dozen people were seen next to the signs in the Getty Images.

Also, these facts are key: No evidence substantiated the claim that Harris felt or expressed negative feelings in response to the protest, despite what Williams' wrote in his Facebook post. In fact, it's unknown whether she felt any emotion toward the protesters or if she had seen their banners at all. Security personnel lined the demonstration, according to Getty, and no photos of the vice president's landing showed her with or near the protesters.

Furthermore, Harris had not mentioned the protests during any public statements nor did the administration's communication team respond to our email to try to answer the above-listed questions, as of the original publication of this report.