Did a Royal Guard Film a TikTok Selfie with Queen Elizabeth II?

Readers asked about a TikTok video that appeared to show a member of the Queen's Guard recording a selfie with Queen Elizabeth II. 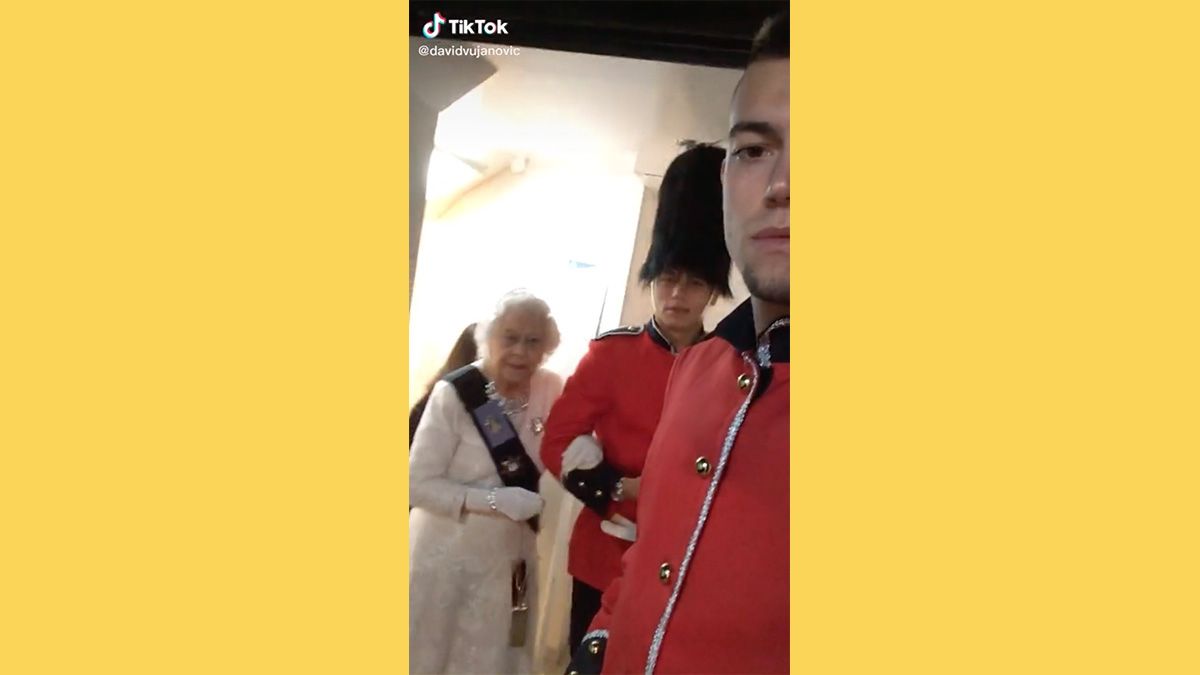 Claim:
A TikTok video shows a member of the Queen's Guard capturing a selfie video with Queen Elizabeth II.
Rating:

On Dec. 11, 2020, iHeart.com published an article with the headline, "Royal Guard Makes First TikTok Of Queen Elizabeth of England." According to the story, a member of the Queen's Guard filmed a brief selfie video with Queen Elizabeth II. At first glance, the video appeared to be fake. Still, we looked for evidence. We soon found data that showed the video had been captured backstage during a theatrical production, meaning that the people who looked like the queen and guards would have been actors.

Back when the video was first posted, it was discussed on Twitter, Reddit, and in the comments of @davidvujanovic's original TikTok upload:

As of September 2022, the original upload of the video had been viewed more than 34.2 million times. Other users reposted the video several times, with at least one upload also receiving millions of more views. We also noticed that @davidvujanovic reposted his original video following the announcement of the queen's death on Sept. 8, 2022, which was what prompted our readers to ask us to look into the clip.

"That’s not the queen," one Twitter user said. Others made fun of the outfits for the queen and guards on display in the video, with one person saying the woman looked to be "the Great Value version of the queen," referring to Walmart's line of value-priced products.

As at least one other Twitter user pointed out, subsequent videos posted to the same TikTok account provided clues that showed the people were all actors in a theatrical production. The clips all appeared to have been recorded backstage.

For example, this video included sound of the woman who played the queen as she and others sat in a dark, backstage area:

Another video showed the actors appearing to stand onstage and in front of an audience:

The account also published two other videos that showed the actor taking a selfie backstage with the woman who portrayed the queen. We weren't able to find a record of her name:

As of September 2022, a Facebook account bearing the same name as the TikTok user associated him with the city of Loreto in Italy. However, it's unclear if this was where the videos were captured in 2020.

While we were researching this video, we also came across a news story that we wanted to share. In 2014, BBC.com reported about the genuine moment when a young boy in Belfast managed to snap a selfie with Her Majesty.

This story will be updated if we learn any further details such as the name of the theater, the title of the stage production, or the country where the videos were recorded.

On Sept. 9, 2022, this story was updated to remove an inaccurate sentence about the role of the Queen's Guard.