"This is a Christian religious advertisement, and allowing it to stay there is an insult to everyone who doesn't believe in that particular religion." 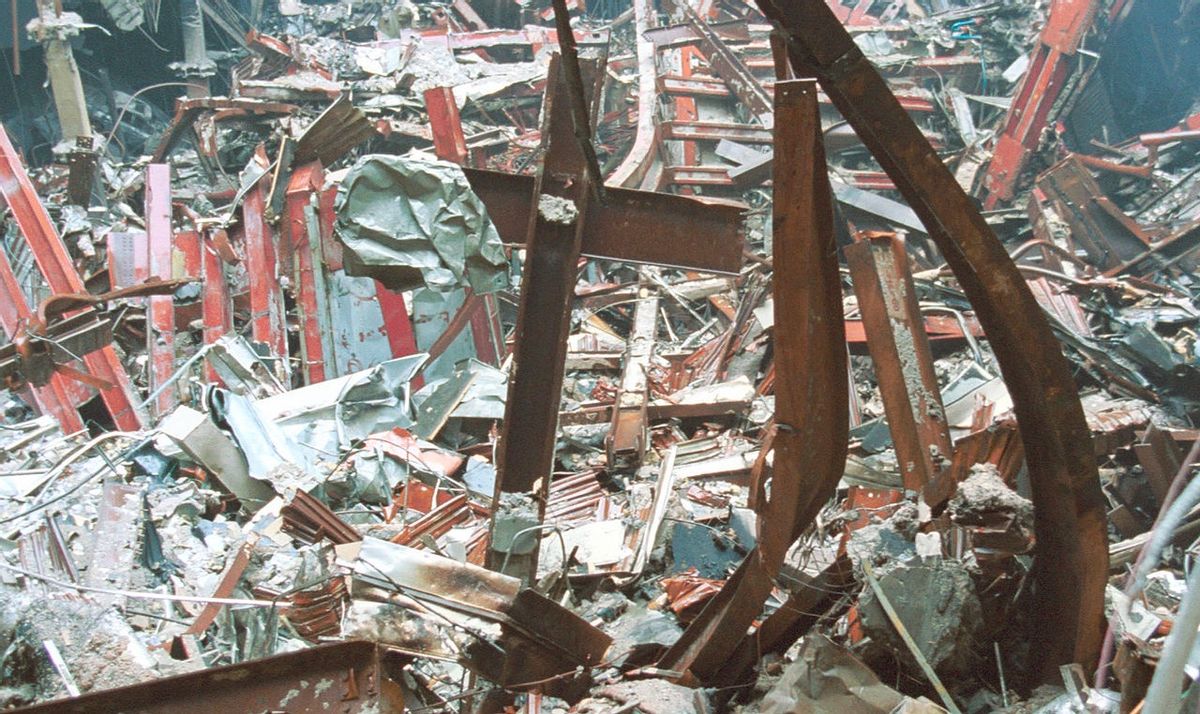 Claim:
American Atheists are opposing the incorporation of a steel-beam cross found in the World Trade Center rubble into a September 11 memorial and museum.
Rating:

The discovery of a 17-foot steel-beam cross in the rubble of the World Trade Center towers two days after the 2001 terrorist attacks on America provided a tangible symbol of comfort and faith to many of those horrified by the events of September 11.

Some of those who had access to the WTC site at that time made pilgrimages to pray before the cross and leave behind written messages such as "God Bless Our Fallen Brothers." A few weeks later the cross (since dubbed the "Ground Zero Cross") was hoisted atop a 40-foot-high mound of debris on what was formerly a pedestrian walkway so that it could be viewed by a wider audience, and a religious service was held, during which the Rev. Brian Jordan sprinkled the cross with holy water and declared: "Behold the glory of the cross at ground zero. This is our symbol of hope, our symbol of faith, our symbol of healing":

Countless other ceremonies and prayer vigils were held at the site of WTC cross in the weeks and months that followed. Two years later, the cross remained in place along Church Street on the eastern border of the 16-acre WTC site.

After the unearthing of the steel-beam cross from the WTC rubble, a number of groups supported the idea of incorporating the steel cross into the design of a future September 11 memorial display at the site. The American Atheists organization opposed such plans for reasons expressed by their president, Ellen Johnson, at least as far back as June 2002:

Efforts to make the steel cross part of a permanent display at the site in Lower Manhattan come as officials mull a suitable way to re-develop the former World Trade Center location. A final blueprint for the area is to be chosen by December 1, and will include a memorial of some kind to the 2,823 people killed during the attack on the twin towers.The redevelopment group has already received more than $2 billion in public funds to construct new buildings on and around the former WTC site.

Johnson added that calls to include the cross as part of a permanent memorial "insult the victims, rescue workers and other Americans who are not Christians, who do not believe in a deity and are not religious."

Ms. Johnson reiterated American Atheists' position in the 8 September 2003 edition of The Trentonian: "Many people who died on September 11 weren't Christian. There were Jews, Muslims, and atheists who died. This is a Christian religious advertisement, and allowing it to stay there is an insult to everyone who doesn't believe in that particular religion."

This position brought opposing campaigns from those who favored incorporating the cross into a permanent 9/11 memorial:

This is one e-mail that you NEED to forward to ALL of your contacts, across the country and around the world. We MUST NOT let the travesty below take place.

According to a recent article, with the upcoming 2-year anniversary of the deadly 9/11 attacks, "an atheist organization is once again warning against using a steel-beam cross at the site of the World Trade Center disaster from being used in a permanent memorial to the victims who died there."

The organization American Atheists (founded by the late Madalyn Murray O'Hair) is protesting a proposal to use a large steel cross found in the rubble of the World Trade Center in a memorial to victims of the Sept. 11 terrorist attacks.

We all remember that cross. A construction worker came across it in the midst of the WTC wreckage just a few days after the attacks. It was standing straight, 20-feet high, surrounded by many smaller crosses. After it was discovered, construction workers, firefighters, police officers and family members began holding weekly Sunday services at the site.

The names of fallen police officers and firefighters were also scribbled on the cross, along with the message "God Bless Our Fallen Brothers".

And now, this group of atheists is threatening a lawsuit to prevent the cross from becoming part of any permanent memorial.

You and I can help to stop their assault by signing ConservativeAlerts.com's online petition.

ACTION ITEM: The Lower Manhattan Development Corporation, the agency overseeing the rebuilding of the area, has made no decisions on what a Ground Zero memorial would include. There's still time for hundreds of thousands of people to voice their opinion, that the "Ground Zero Cross" should remain as part of any future memorial to the WTC victims.

Go to our site below to sign the "Ground Zero Cross" petition NOW:

NOTE: In order to have an impact on the folks at the Lower Manhattan Development Corporation, we need HUNDREDS OF THOUSANDS of signers, from across America and all over the world, on this petition, which we will present to the agency. Be sure to forward this e-mail to everyone you know who wants to help STOP the atheists from blocking this powerful symbol of healing after disaster. Thank you!

Plans called for the 17-foot World Trade Center crossbeam to be on display at the museum portion of the National September 11 Memorial & Museum when that facility opened. In 2011 American Atheists filed a lawsuit to prevent that display, contending that the museum would be violating the Constitution's establishment clause and New York state civil-rights law by exhibiting a religious symbol. In August 2012, the National September 11 Memorial & Museum filed court papers seeking a dismissal of the lawsuit on the grounds that the museum is operated by an independent non-profit corporation and its decisions about what to display are therefore not state actions subject to constitutional protection, that the crossbeam is being exhibited as a relic of the 9/11 attacks and not as a religious symbol, and that the museum's merely displaying an object with religious significance does not amount to an endorsement or promotion of a particular religion.

In July 2014, a the three-judge panel of the Second Circuit Court denied the American Atheists' appeal and ruled that the Ground Zero cross could remain in the museum, holding that it served more as a "genuine historical artifact" than as a symbol of Christianity:

The judges noted that the cross — comprised of a 17-foot steel column and a crossbeam — became a "symbol of hope and healing for all persons" in the immediate aftermath of the tragedy.[American Atheists has] appealed, arguing that displaying the cross at the museum violated the Establishment Clause of the First Amendment, and state constitutions of New York and New Jersey.

The atheists contended the display of the cross at the museum "gave the impression of a Latin cross, a symbol associated with Christianity."

They asserted that displaying the cross was unconstitutional, "particularly without any accompanying plaque or similar item acknowledging that atheists were among those" who died on 9/11 or participated in the rescue efforts.

The appellate judges ruled the atheists' "challenge fails on the merits."

The judges concluded that the "stated purpose of displaying The Cross at Ground Zero to tell the story of how some people used faith to cope with the tragedy is genuine, and an objective observer would understand the purpose of the display to be secular."