Is This the Real Obituary of Margaret Groening, Mother of 'Simpsons' Creator Matt Groening?

Margaret was reportedly married to a man named Homer. 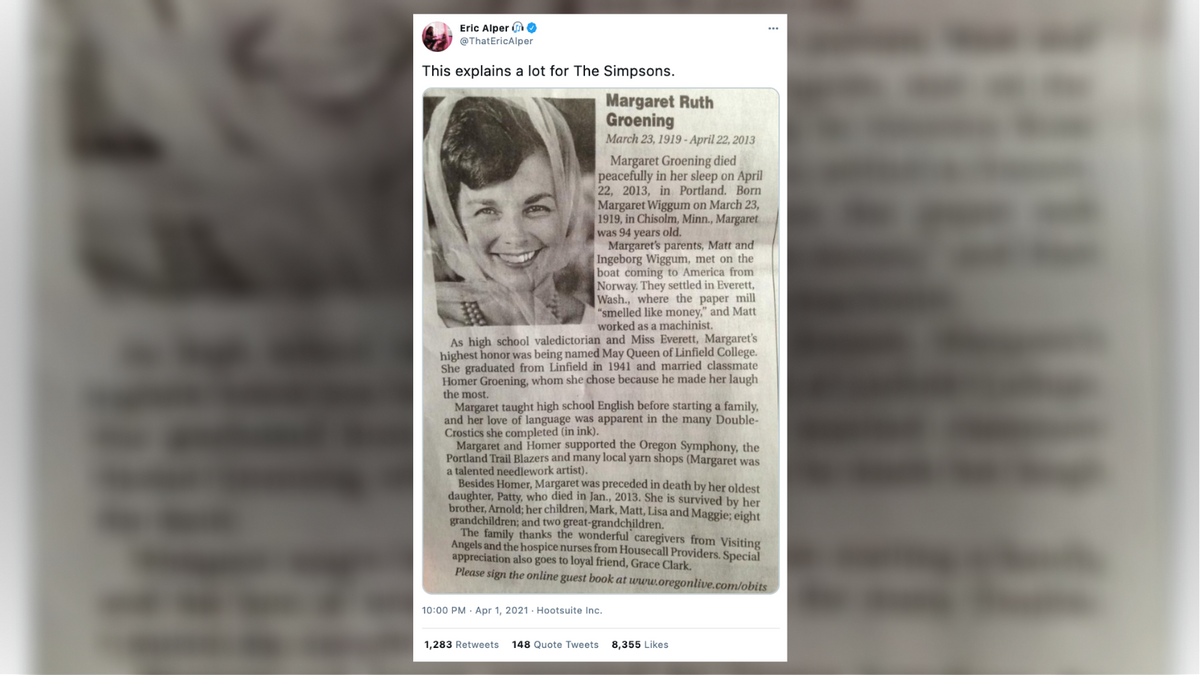 Claim:
A viral article purporting to be the obituary of Margaret Ruth Groening, mother of "The Simpsons" creator Matt Groening, is authentic and accurately describes the origins of the names of some of the show's characters.
Rating:

For decades, “The Simpsons” has been the inspiration behind a number of internet hoaxes and rumors, from the supposed prediction of the Donald Trump presidency (false) and the foretelling of Pokemon Go (also false), to a long list of political pranks and online bamboozles.

And, in 2021, a tweet that was shared to Twitter on April 1 by music publicist Eric Alper drew a comparison between Margaret Groening’s obituary and Marge from “The Simpsons.” Despite the conspicuous date of the posting, it did not appear to be an April Fools' joke.

The claim that Margaret Ruth Groening inspired the blue-haired motherly figure in “The Simpsons” is true. Margaret was indeed the mother of Matt Groening, the creator of The Simpsons. And the names of her three children inspired the main characters of the classic 1989 adult cartoon. (Though the full name of the fictional Marge Simpson character was Marjorie. The only significant Margaret in the Simpsons universe is Maggie the baby.)

An obituary published in The Oregonian on May 6, 2013, (archived here) described Margaret Ruth Groening, who died in her sleep on April 22, 2013, at the age of 94. Margaret married her Linfield College classmate, Homer Groening, in 1941, whom she chose because he “made her laugh the most.”

Margaret and Homer supported the Oregon Symphony, the Portland Trail Blazers and many local yarn shops (Margaret was a talented needlework artist). Besides Homer, Margaret was preceded in death by her oldest daughter, Patty, who died in Jan., 2013. She is survived by her brother, Arnold; her children, Mark, Matt, Lisa and Maggie; eight grandchildren; and two great-grandchildren.

According to the Internet Movie Database (IMDb), Matt Groening was born in 1954 in Springfield, Oregon, and grew up two hours away in Portland. His biography noted that he was the son of Homer Groening, an animator and producer of surf movies, and was married to Margaret.

“Many members of the Simpson family are named for members of his own family: Homer, Marge, Maggie, Lisa and Patty,” wrote the website.

It’s no coincidence that The Simpsons family of five have the same names as Margaret’s children. In a 1990 interview, Matt Groening said that the character of Bart Simpson — son of Homer and Marge — was based partly on Dennis the Menace and himself as a child. Bart’s original name was going to be Matt, but he changed it because it sounded too closely related. Fittingly, Bart is an anagram of “brat.” Lisa Groening, Matt’s sister in real life — and Bart’s sister in cartoon form — also worked in entertainment. And Matt himself was born in Springfield, Oregon, a town of more than 60,000 residents that also served as the inspiration of the fictional Ohio-based town in the cartoon show.

And it’s not just Matt Groening’s family members who inspired the characters on the show. NPR noted in 2012 that much of the content in “The Simpsons” was prompted by real people and places in his life.

The names of many characters on the show — Flanders, Kearney, Lovejoy — correspond to street names in Portland, Ore. Indeed, Groening says his goal was to 'name every character after streets in Portland, but we were in a hurry so I dropped the idea.'

Another clue: The Simpsons live on Evergreen Terrace – also the name of the street the Groenings lived on. And, of course, Homer, Marge, Lisa and Maggie are named after Groening's parents and sisters, respectively.