Does This Photo Show a Grocery Store Shopper in a KKK Hood?

Santee, California, has been associated with white supremacist activity for years, earning the city the nickname "Klantee." 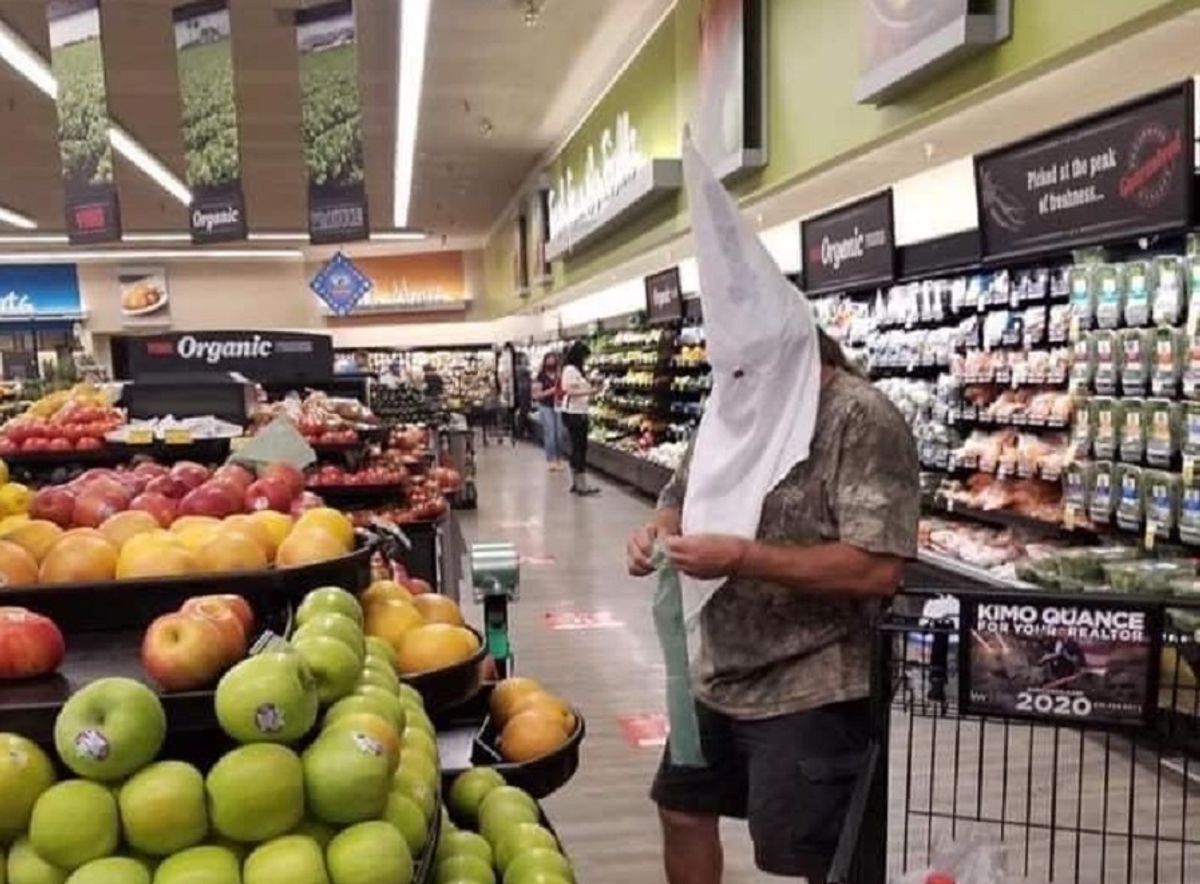 Claim:
A photograph shows a customer shopping at a grocery store during the COVID-19 coronavirus disease pandemic wearing a Ku Klux Klan-like hood over his head.
Rating:

In May 2020, social media users shared photographs of a man shopping at a grocery store during the COVID-19 coronavirus disease pandemic wearing not a standard face mask, but a white head covering that appeared to be a Ku Klux Klan (KKK) hood:

Many viewers questioned whether the photographs were real or possibly staged, and why the shopper was seemingly allowed by store personnel to wear such a get-up while shopping.

These pictures are indeed real, snapped at a Vons grocery store in the suburban city of Santee in San Diego County, California. Vons has acknowledged that the incident took place at one of their stores.

It is not yet known whether the customer did in fact eventually remove the hood and/or check out with his groceries. The San Diego County Sheriff's Department said that deputies were not called to the scene, but they are reviewing security video footage to identify the person seen in the pictures and may pursue criminal charges against him.

CNN spoke to some customers who were in the Santee Vons store at the time:

Customer Alisa Wentzel told CNN she spotted the shopper, whom she believes was a man, as soon as she entered the store. He was waiting in the checkout line, she said, wearing the hood.

At first she didn't believe what she was seeing, she told CNN.

Wentzel moved between aisles to sneak photos of him and keep her distance.

"Management should be doing something, but I didn't see anyone talking to him," she said. "He was just standing in line."

By the time she'd finished her shopping at the self-checkout lane some 30 minutes later, the man was in line waiting for a cashier, still wearing his hood, she said.

"I just remember feeling so heartbroken, so hopeless and then also just really upset that this would happen in the community that I raise my family in," she said. "I was just in utter shock and disbelief. I still feel that way."

San Diego television station KGTV reported that the full statement from Vons on the matter read as follows:

At Vons, fostering an environment of courtesy, dignity, and respect is one of our highest priorities, and we work hard to hold everyone in our stores to these standards, including customers. Unfortunately, an alarming and isolated incident occurred at our Vons store in Santee, where a customer chose an inflammatory method of wearing a face covering. Needless to say, it was shocking. Several members of our team asked the customer to remove it, and all requests were ignored until the customer was in the checkout area. This was a disturbing incident for our associates and customers, and we are reviewing with our team how to best handle such inappropriate situations in the future.