Did Greta Thunberg Disguise Herself as Pro-Trump Rioter?

If so, an uncredited meme would not likely be the first to report the discovery. 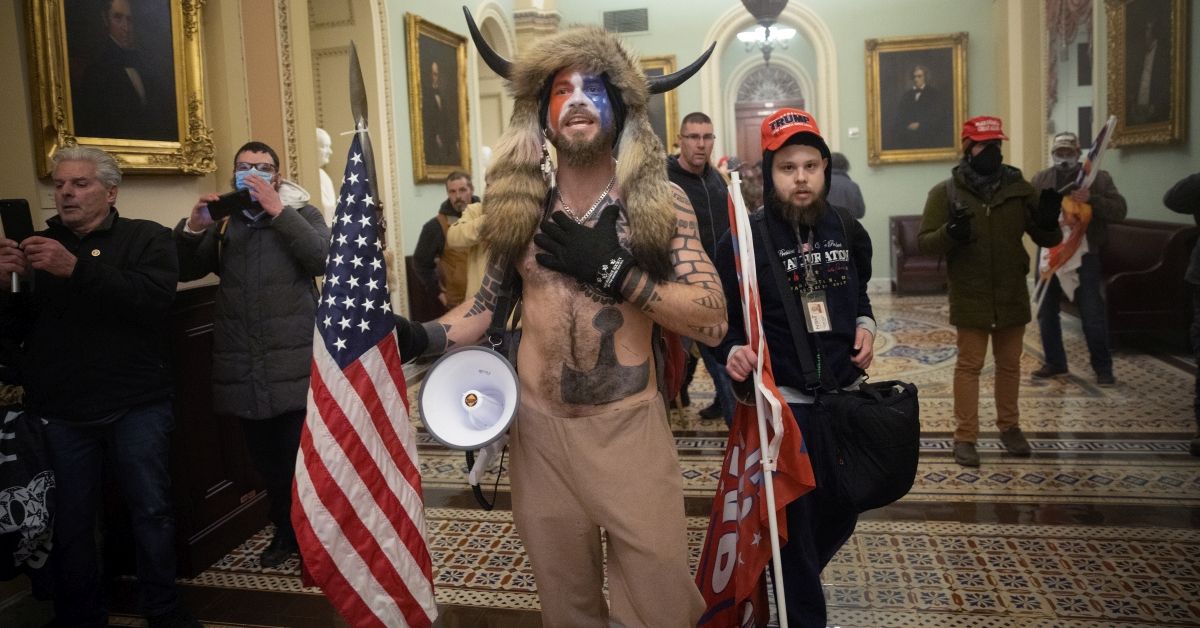 Claim:
A meme showed environmental activist Greta Thunberg in disguise as a member of the pro-Trump crowd that stormed the U.S. Capitol on Jan. 6, 2021.
Rating:

In the weeks after American right-wing extremists stormed the U.S. Capitol to try to overturn results of the 2020 election, Snopes became aware of the below-displayed meme that alleged Swedish teenage environmental activist Greta Thunberg was a member of the violent, pro-Donald Trump crowd. The meme included a horizontal photo of the mob in a hallway outside the Capitol's Senate chamber, where congressional members were preparing for a ceremonial vote to affirm President Joe Biden's election victory over Trump.

The raw image was authentic, and indeed depicted members of the crowd, with self-described "QAnon digital soldier" Jake Angeli front and center.

Getty Images photographer Win McNamee captured the same scene from similar angles, as you can see from the feature image on this report and the below-displayed image, both of which Snopes obtained via Getty Images' database of photojournalism. Without evidence to support the claim, the meme alleged the person flanking Angeli's left side, holding a Trump flag, and wearing a badge around his neck was actually 18-year-old Thunberg in a disguise.

In other words, the post wanted viewers to believe Thunberg's international reputation for ringing the alarm on climate change was actually a facade to cover her American far-right extremism, or that she was operating undercover as a left-wing activist to try to make Trump supporters look bad.

The former theory was a far stretch considering Trump's history of publicly mocking Thunberg on Twitter, and the latter claim centered on the thoroughly-debunked QAnon conspiracy theory that anti-fascist activists actually instigated the violence at the Capitol — when, in reality, the FBI said there was "no indication" that anyone from that leftist movement was involved in the attack.

Nonetheless, the meme's allegation was false. Despite the fact that the person photographed holding the Trump flag and the teenage activist had notable differences in their facial shapes and structures, we looked for any evidence to support the claim that Thunberg was a member of the crowd. We found none.

For argument's sake, had she dressed up as a Trump supporter and participated in the siege to try to overthrow Biden's presidential win (for whatever reason), the discovery would not likely emerge first as an uncredited meme, but rather as a major news story from a reputable source, considering Thunberg's prominence.

Additionally, the person next to Angeli was identified, not as the international activist, but as a male employee of a Maryland-based marketing production company, according to news reports and a statement from Navistar Direct Marketing obtained by Snopes. The company identified him based on the badge around his neck and subsequently fired him for his involvement in the insurrection, according to the statement, which is displayed below. No further details, such as his name or motivation for leading the siege, were publicly available. Authorities believe more than 800 people made their way into the Capitol on Jan. 6, according to The Associated Press. As of this report, prosecutors were considering charging some of them with sedition, which carries up to 20 years in prison, and had charged others with crimes including unlawful entry and disorderly conduct.

In sum, considering the unsubstantiated claims that Thunberg was a closeted Trump supporter or left-wing agent provocateur, as well as proof that the person in question was a male employee of a Maryland-based marketing company, we rate this claim "False."