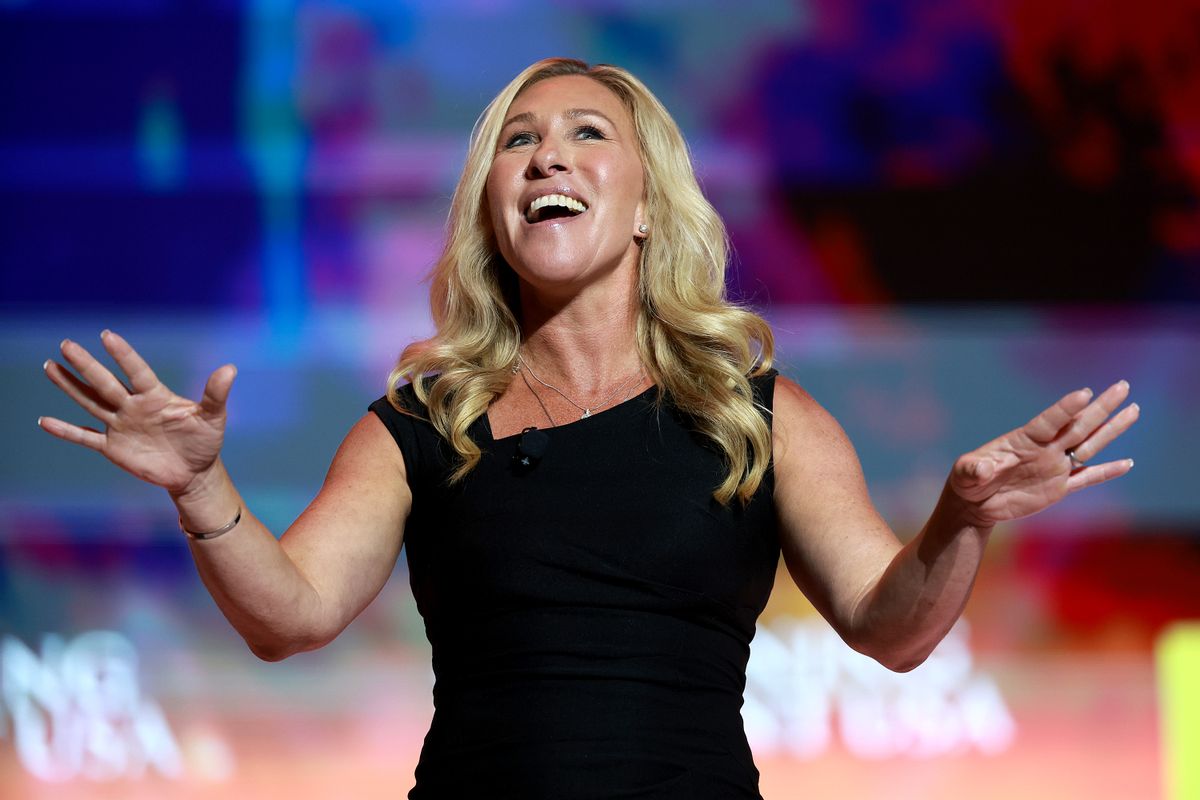 Claim:
Echoing Adolf Hitler's exact words from 1928, U.S. Rep. Marjorie Taylor said, "We tolerate no one in our ranks who attacks the ideas of Christianity. Our movement is Christian."
Rating:

On Aug. 1, 2022, we received mail from our readers asking us to find out if U.S. Rep. Marjorie Taylor Greene, R-Ga., had repeated a 1928 utterance by Nazi leader Adolf Hitler about Christianity. The original Hitler quote, which we authenticated previously, read, "We tolerate no one in our ranks who attacks the ideas of Christianity. Our movement is Christian."

A meme that appeared in several public Facebook posts (and likely quite a few private postings as well) also attributed that statement to Greene, as if she were echoing Hitler's exact words. However, we found no record of Greene repeating Hitler's statement about Christianity. While it's true that Hitler said these words, we were unable to find any evidence that Greene ever repeated the quote.

We looked to reporting from Salon and HuffPost. It appeared that the idea to add Greene to the Hitler meme was likely inspired after she was interviewed at the conservative Turning Point USA's Student Action Summit (SAS). The student event took place on July 23, 2022 in Tampa, Florida. The same date was mentioned in the meme under Greene's name.

On or around July 23, Greene was interviewed by Tayler Hansen with the conservative Next News Network. A video of the interview was published on Twitter:

During the interview, the following exchange took place, in which Greene called herself a "Christian nationalist":

Hansen: What do you think is the primary focus of the GOP going into 2022? What should it be opposed to what is it?

Greene: Oh wow. That's such a good question, because there's a lot of things it should be. I think Republicans really need to recognize the people they represent, ok? Their voters. Not the lobbyist donors. Not the corporate backs. Not those people. That's not who the Republican Party should represent.

We need to be the party of nationalism. And I'm a Christian and I say it proudly: We should be Christian nationalists. And when Republicans learn to represent most of the people that vote for them, then we will be the party that continues to grow without having to chase down certain identities or chase down, you know, certain segments of people. We just need to represent Americans. And most Americans, no matter how they vote, really care about the same things, and I want to see Republicans actually do their job. That's what I want to see.

In addition to the interview, Greene spoke onstage at the student event in Tampa about why she refers to herself as a "nationalist." At the 4:07 mark in the following YouTube video, Greene said, "If you're a nationalist, that means you care about your country, which we should. Now, all of our tax dollars are hard-earned tax dollars, they should go towards our country, isn't that right?"

Greene added remarks at the 8:18 mark in the video about referring to herself specifically as a "Christian nationalist":

I also call myself a Christian nationalist. And that's not a bad word. That's actually a good thing, right? And there's nothing wrong with leading with your faith, because we should lead with our faith, because if we're doing that then we're doing the right thing. Doesn't mean we're perfect. It just means we're doing the right thing, and I think that's what the Republican Party needs to be about. The Republican Party also needs to be the party that cares about the American worker, not the corporations.

The "Christian nationalist" remarks from Greene led to backlash from Christian groups Faithful America and Baptist Joint Committee for Religious Liberty, as well as colleagues in Congress.

In sum, the meme's claim that Greene repeated the words Hitler uttered about Christianity in 1928 is false.

Note: We reached out to Greene's office for comment about the meme but did not yet receive a response.