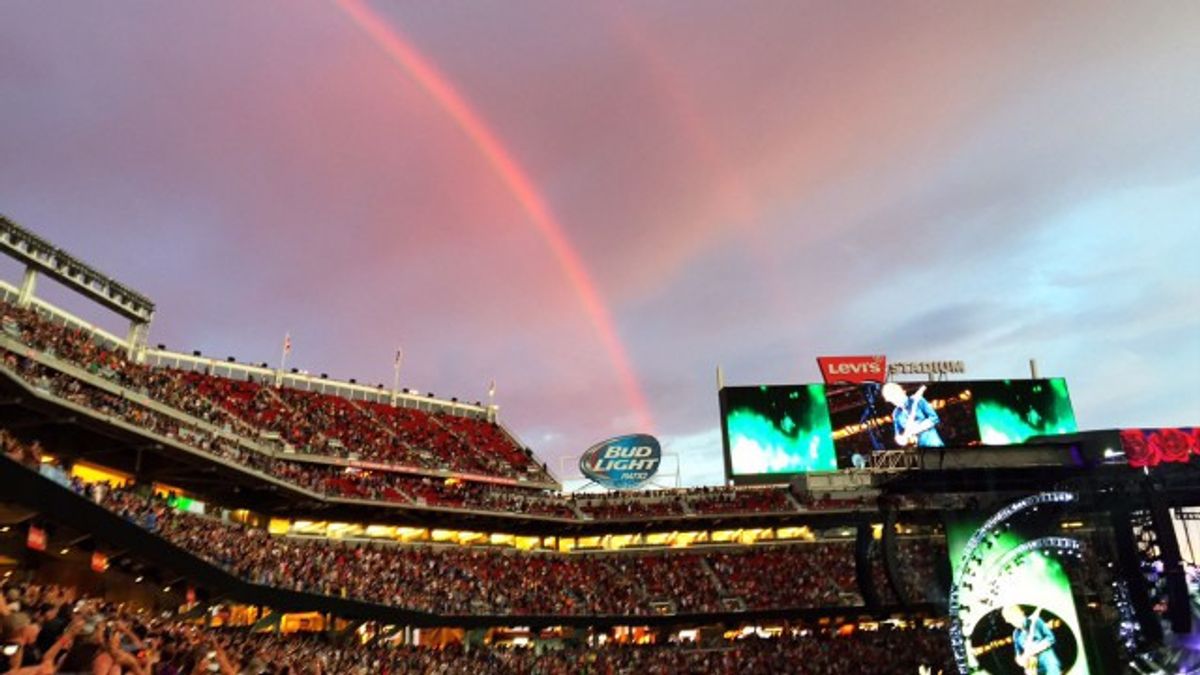 FACT CHECK:   Did the Grateful Dead spend $50,000 to create an artificial rainbow for the first show of their "Fare Thee Well" tour?

Claim:   The Grateful Dead spent $50,000 to create an artificial rainbow for the first show of their "Fare Thee Well" tour.


According to Billboard Magazine, the remaining members of the Grateful Dead allegedly spent $50,000 to manufacture a rainbow over their concert last night.  I don't see any other outlets reporting that they manufactured it, is this true?

Origins:   In late June 2015 — as the four surviving members of the Grateful Dead launched their farewell five-date mini-tour (billed as the "Fare Thee Well" tour) in Northern California, where the legendary band had started fifty years earlier — a near-perfect rainbow "arced above Levi's Stadium" and "streaked across the pastel Santa Clara sky": In their review of that concert, the music trade publication Billboard published an article reporting that the rainbow wasn't a natural phenomenon; rather, the group had spent a whopping $50,000 to create an artificial rainbow effect:

The set ended with a 17-minute "Viola Lee Blues" that segued into a deep jam accentuated by a glorious rainbow encircling the venue in the sky. Said one longtime head: "This is the band that jams with God." Alas, it was not Mother Nature that stepped in. Rather, the production sprang for the effect, at a cost of $50,000, according to an insider."

When Live for Live Music looked into the Grateful Dead artificial rainbow debate, they managed to dig up a response to the rumor from the band's supposed lighting director, Paul Hoffman, who jocularly suggested that the rainbow effect had been created by 600 Vari-Lites (the brand name of an automated, variable-color stage lighting system) positioned on a building two miles away from the concert venue: Hoffman's comment, however, was nothing more than a joke, and he later took to Facebook to clarify that the rainbow in question was in fact a real one:

Billboard subsequently updated their article to note that they had initially misreported the rainbow aspect of the story:

Update: this article has been updated to include the continuing debate over the appearance of the rainbow, which upon further investigation appears to have been real. Turns out this band really does jam with God.

(We note that the concept of artificial rainbows is not so far-fetched, however.)

Although the Grateful Dead have not officially commented on the rainbow controversy, they have posted photographs of the event to social media: