Are Raisins and Grapes Toxic to Dogs?

A subset of dogs appears to be susceptible to kidney damage following the ingestion of grapes, but scientists are at a loss to explain it or predict which dogs are at risk. 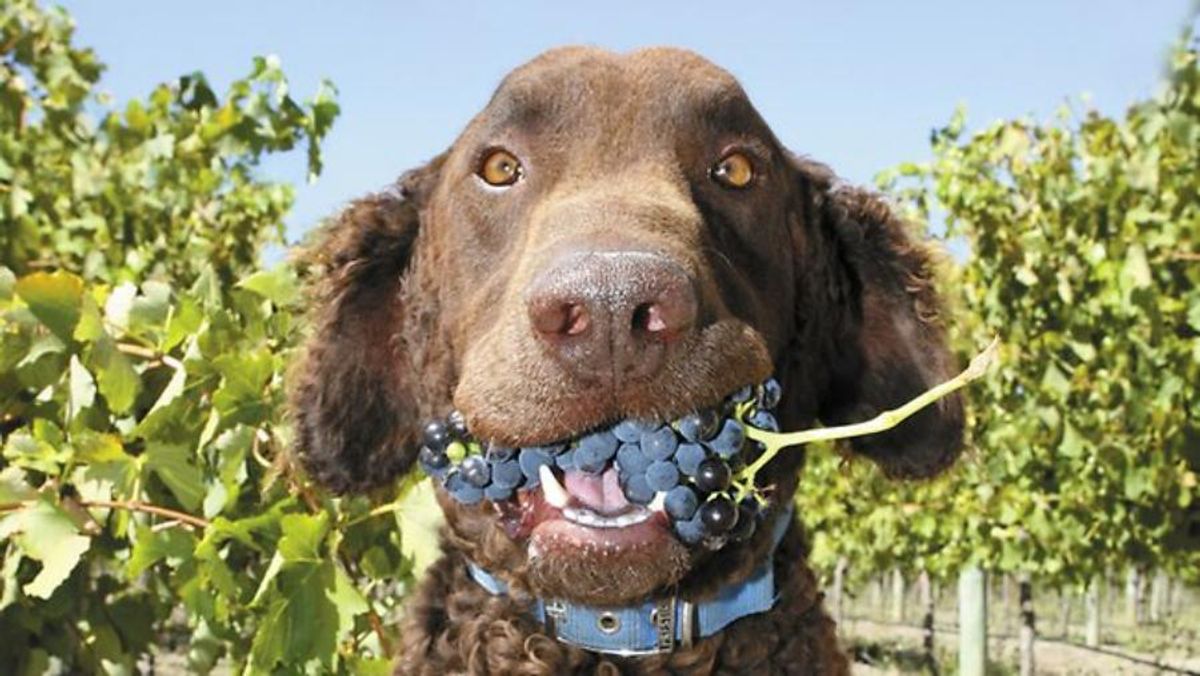 Claim:
The ingestion of raisins or grapes can produce acute renal failure in dogs.
Rating:

Several published cases have documented the development of acute renal failure in dogs who consumed large quantities of grapes or raisins.

Many dogs ingest grapes or raisins with no harmful effects, and the scientific mechanism linking grapes and raisins to acute renal failure in canines is unknown.

Most dog lovers have long been exposed to dire warnings urging that canines should not be offered or allowed to ingest grapes and raisins, lest they suffer kidney failure (i.e., acute renal failure) as a result of ingesting them. However, the mechanism behind why renal failure might occur in some dogs after they have consumed grapes or raisins, as well as the criteria that put some dogs at risk but not others, remain largely unknown.

An increase in reports American Society for the Prevention of Cruelty to Animals (ASPCA) of dog poisoning potentially associated with grapes and raisins began in 1999, spurring research into the topic. Starting in 2001, several researchers, including Vice President and Medical Director of the ASPCA Animal Poison Control Center Sharon Gwaltney-Brant, began to comb through veterinary records for cases of kidney failure in dogs following grape or raisin ingestion.

A 2005 study by Gwaltney-Brant and others identified 43 such cases occurring between 1992 and 2002. These cases involved a fairly broad range of grape (or raisin) types, included a wide range of amounts consumed by each dog, and took place across several breeds of dog. Most cases included several familiar markers of kidney failure, such as excesses of nitrogen, phosphate, and calcium in the bloodstream that betray a weakly functioning kidney. These cases involved an average of 16 ounces of grapes or raisins per dog but ranged widely (from 1.5 to 32 ounces per animal). Each case included vomiting as one of its clinical signs, and fatalities resulted in just under 50 percent of instances.

That study, however, did not offer a hypothesis for why grapes might cause harm to a dog’s kidneys, and it noted that many dogs ingest grapes or raisins in similar amounts without suffering any harm whatsoever. "The toxic principle that causes [acute renal failure] after ingestion of grapes or raisins in dogs is unknown,” the study stated. In February 2019 we reached out to Gwaltney-Brant to ask if any progress had been made since the early 2000s, and she told us via email that:

We really don’t know much more now than we did 18 years ago. Unfortunately, funding for research into things like grape/raisin intoxication in dogs is scarce. Certainly there have been several more publications on the subject, including case reports or case series, a summary of pathological lesions in affected dogs, and a retrospective study.

One institution did do some in vitro preliminary studies and found an aqueous extract from the superficial area of grape that caused cell death in canine kidney cells in cell cultures (did not harm kidney cells from humans), but to my knowledge that’s as far as anyone has researched it; as far as I know, the aforementioned study was not published but was presented as a poster at a toxicology conference. We have several anecdotal cases in cats and a few in ferrets, but these have not been published either.

As veterinarian Ahna Brutlag explained on the website of the VCA chain of animal hospitals, dogs are more likely to become poisoned if they ingest large amounts of grapes or raisins, but each dog seems to have its own sensitivity level. Because the cause of toxicity is unknown, Brutlag recommends taking action immediately if grape ingestion is suspected and offers several common symptoms associated with kidney failure:

Since it is currently unknown why these fruits are toxic, any exposure should be a cause for concern. If you suspect that your pet has eaten any of these fruits, please contact your veterinarian or Pet Poison Helpline, an animal poison control service, immediately. Do not waste any time. Since there are still many unknowns associated with this poisoning, it is better not to take any chances when it comes to your dog's health.

The most common early symptom of grape or raisin toxicity is vomiting, which is generally seen within 24 hours following ingestion. Lack of appetite, lethargy, and possibly diarrhea can be also seen within the next 12-24 hours. More severe signs are not seen for 24-48 hours after ingestion – often after acute kidney failure has already begun. Signs of acute kidney failure include nausea, lack of appetite, vomiting, uremic breath, diarrhea, abdominal pain, excessive thirst, and excessive urination.

Gwaltney-Brant, Sharon et al.   “Renal Failure Associated with Ingestion of Grapes or Raisins in Dogs.”     Journal of the American Veterinary Medical Association.   15 May 2001.