Are These Symbols Part of a Burglars' Code?

Rumor has it that unexplained chalk markings found on the outside of homes or other property warn of criminal activity to come. 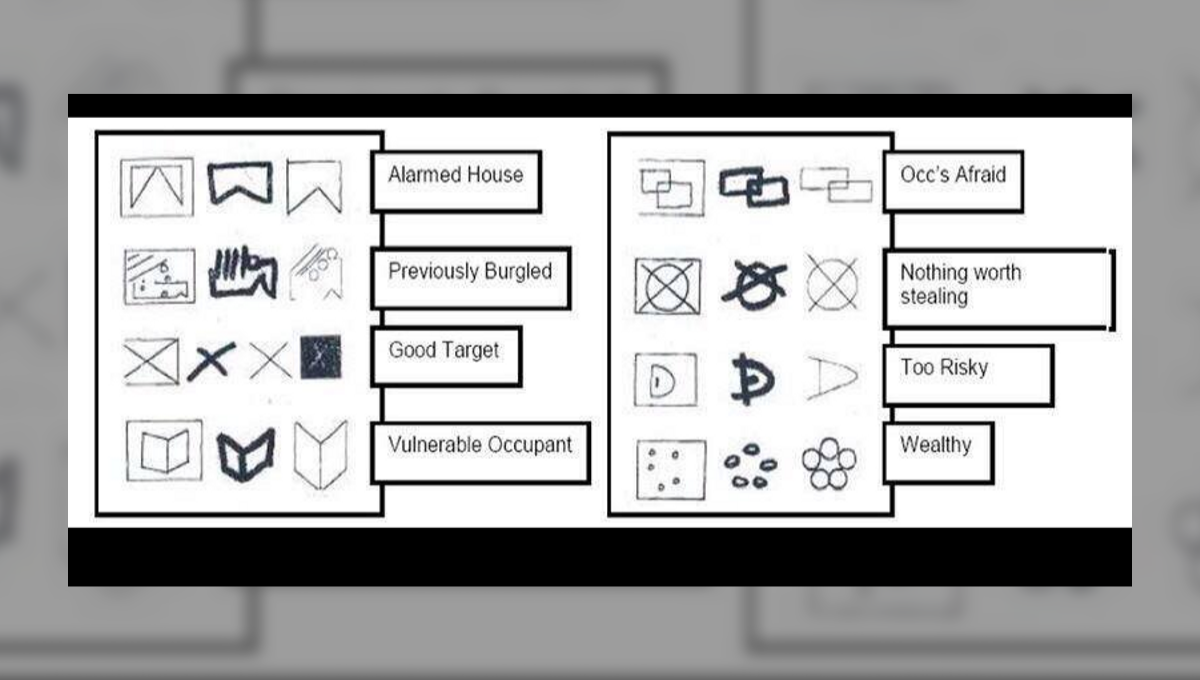 Claim:
Police have cracked a "housebreakers' code" by which cars or homes are marked with white Xs or other symbols for later crimes.
Rating:

The following warning concerning a mysterious white "X" subtly marked onto at least two vehicles in Texas was circulated online in May 2015. However, the theme of secret codes used by bands of outsiders for a range of purposes (typically criminal ones) is not new to modern lore and far predates the unusual markings spotted in Texas.

I posted this yesterday on another page and I have been asked by a friend to post on my personal page so others could share it.

This is my daughters truck and this white X was marked on her truck while at the Conroe Walmart yesterday (5-25-15). I have asked several LEO's as well as searched on it myself and no one seems to have any answers however several other people have posted the same white X on the same spot on the vehicle! Similar tales (each quite popular) have involved hidden markings bestowed upon the vehicles of gun shop customers and the homes of dog owners, presumably to target their owners for later acts of burglary or other untoward dealings.

The seemingly mysterious 'X' markings on vehicles have simple explanations, ones that have nothing to do with criminal intentions: they're put there by manufacturers, vendors, used car dealers, auction houses, car washes, or auto repair facilities, and can indicate anything from which services or repairs a vehicle owner has requested to what types of work has already been performed on a vehicle. In short, they're guides to assist those who fix, sell, and clean cars, not "come get me" signals to car thieves.

In any case, auto theft is overwhelmingly a crime of opportunity; hardly anyone but steal-to-order car thieves is going to bother with casing and marking cars for later boosting.

Just before the warning about X marks on cars popped up in Texas in May 2015, several British tabloids reported upon a supposed housebreakers' code discovered via a tweet (and Facebook post) published by a police department in the UK: So groundbreaking was this April 2015 revelation by the Lanarkshire Police that the British press appeared to have suffered grave amnesia on the matter of new burgling innovations. Both the BBC and the Guardian had cracked the mysterious "Da Pinchi Code" way back in 2009, and the Telegraph only got wind of the burgeoning threat of chalk symbols four years later, in 2013.

Like many claims of their ilk, what the housebreaker's code warnings rest upon is claimants who believe they were targeted as potential victims due solely to unexplained markings found on the outside of their homes (or near their property, or on their vehicles) even though no evidence demonstrated any ensuing attempt was mde to burgle or rob them. These rumors typically lack any demonstrable connection between a belief in the presumed purposed of the markings and the actual intent of the persons responsible for them, or any details as to how police could have conclusively determined that symbol X was linked to the commission of crime Y.

Nearly all property crime is predicated upon the desire to enrich oneself or one's interests with minimal effort, and an element missing from the belief that thieves pre-mark homes to rob is one that fails to sufficiently explain where the added value in such a proposition lies. It's possible to burgle a home without first essaying a legend detailing its contents and the temperament of its occupants, an unpleasant reality of day-to-day life that plays out with unfortunate frequency. As mentioned in one of our articles about a similar legend, gangs of criminals working together can simply jot down the addresses of their targets and share them by a variety of means; there is no benefit or advantage to risking exposure and foul-ups by physically marking homes:

Targeting homes for illicit purposes by marking them with some exterior symbol is unnecessarily inefficient: it requires time and effort to visit homes and mark them, it risks exposure from onlookers who might notice and call attention to the activity and discover its purpose, and it risks mistakes over a shaky dependence on markings that are too easily removed (accidentally or purposely) by residents or eradicated by weather, or overlooked by those supposed to be finding them afterwards. Yet all of these vagaries can be easily avoided in one simple way: just jotting down the addresses of the homes of interest. There's no good reason for bad guys to mark a home with some form of symbol as a method for being able to find and return to it later when they could more easily and safely accomplish the same thing simply by recording its address.

The marking of homes to identify them as targets for future activity makes sense only if the markings and the follow-up activity are being performed by different groups who are prevented by time and distance from communicating with each other between those two steps. But in today's world, where information such as an address list can be communicated almost instantaneously by e-mail or text message, and anyone with a cell phone can be reached virtually anywhere at any time, there are no such barriers. Such markings might be practical if the group creating them were doing so for the benefit of persons unknown to them (as in the case of so-called hobo signs), but that scenario makes little sense within a premise of organized criminal activity: crooks have little motivation to expend effort identifying prime targets for the benefit of other crooks unknown to them.

The scant few incidents of this alleged form of crime described in UK media reports generally comprised folks simply reporting their impressions that they'd been targeted:

In one case, an elderly couple in Devon were inundated by a large number of dodgy tradesmen calling at their home over a period of five years.

A subsequent investigation found that a rogue builder who had previously worked at the property and overcharged the couple by £4,000 had left a pattern of blocks code to tip off other cowboy traders that the owners were a vulnerable target.

The article included no information about who discovered this shibboleth and identified its meaning, nor did the elderly couple describe enduring a break-in at their home — the pair were simply targeted by an unspecified number of annoying door-to-door salesmen over a period of years, an unpleasant experienced shared by many residents living in unmarked homes. While it's possible the "pattern of blocks" could have been meant to signal other shady dealers of an easy mark, simple shoddy worksmanship is a much more likely explanation.