Did the U.S. Government Purposely Poison 10,000 Americans During Prohibition? 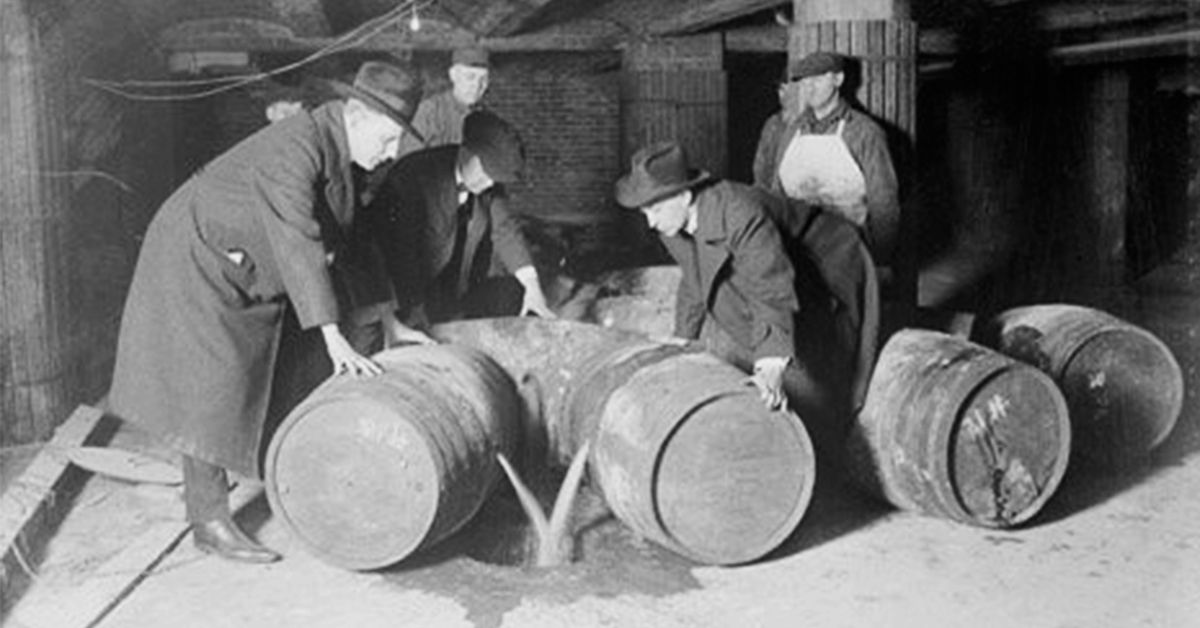 Claim:
In 1926, the federal government poisoned alcohol to curb consumption during Prohibition; by the time Prohibition ended in 1933, an estimated 10,000 people had died from this poisoning.
Rating:

When the manufacture and sale of alcohol was illegal between 1920 and 1933, regulatory agencies encouraged measures making industrial alcohol undrinkable, including the addition of lethal chemicals.

The government did not poison supplies of alcohol meant for human consumption, nor did it intentionally aim to kill those who drank the tainted products.

As if Americans hadn't accumulated enough dark suspicions about their government over the past 50-odd years, along comes an Internet factoid holding that the United States government intentionally (and fatally) poisoned more than 10,000 of its own citizens between 1926 and 1933: The alarming claim is that the U.S. government added poison to alcohol to discourage people from drinking it during Prohibition, the period from 1920 to 1933 in which it was illegal to produce, transport, or sell alcoholic beverages anywhere in the United States. That didn't mean people stopped making, buying, and drinking booze — they just did it illegally. As noted in virtually every U.S. history textbook ever written, one of the many negative unintended consequences of Prohibition was a booming black market in alcohol that law enforcement was never able to subdue.

To the question at hand: Did the federal government really add poison to alcohol to discourage people from drinking it?

It did, in fact. The government did purposely add poisonous substances to alcohol, and this did result in thousands of deaths during Prohibition. The story of how that came to pass is longer and more nuanced than the Internet meme suggests, however. And it began well before the passage of the 18th Amendment, which made Prohibition the law of the land.

According to Deborah Blum, author of The Poisoner's Handbook: Murder and the Birth of Forensic Medicine in Jazz Age New York (Penguin Press, 2010), the practice was called "denaturing". It consisted of adding noxious chemicals to alcohol sold for industrial purposes to make it unfit for human consumption. The process, long used in Europe, was introduced in the United States in 1906 as a means of exempting producers of alcohol used in paints, solvents, and the like from having to pay the taxes levied on potable spirits.

Mainly, this was done by adding some methyl alcohol ("wood alcohol") to grain alcohol, rendering it poisonous. Some formulas also contained substances that made the product taste too awful to drink.

One of the ways crime syndicates tried to flout Prohibition, Blum explained in a 2010 Slate article, was stealing industrial alcohol and finding ways to make it potable. The government, in turn, resorted to making it more poisonous:

To sell the stolen industrial alcohol, the liquor syndicates employed chemists to "renature" the products, returning them to a drinkable state. The bootleggers paid their chemists a lot more than the government did, and they excelled at their job. Stolen and redistilled alcohol became the primary source of liquor in the country. So federal officials ordered manufacturers to make their products far more deadly.

TIME magazine's 2008 Prohibition retrospective described the horrendous consequences of an unregulated — and, in many instances, purposely adulterated — black-market liquor supply:

It wasn't just the violent Prohibition-era gang wars that were dangerous to Americans drinking homemade moonshine and bathtub gin. According to the Dec. 26, 1922 edition of the New York Times, five people were killed in the city on Christmas Day from drinking "poisoned rum." That was only the beginning. By 1926, according to Prohibition, by Edward Behr, 750 New Yorkers perished from such poisoning and hundreds of thousands more suffered irreversible injuries including blindness and paralysis. On New Year's Day 1927, 41 people died at New York's Bellevue Hospital from alcohol-related poisonings. Oftentimes, they were drinking industrial methanol, otherwise known as wood alcohol, which was a legal but extremely dangerous poison. One government report said that of 480,000 gallons of liquor confiscated in New York in 1927, nearly all contained poisons.

Although it is inaccurate in the sense that none of this deadly business began in 1926, the factoid we set out to investigate wasn't entirely wrong in citing that year as a pivotal one. Blum points out that the spate of alcohol-related poisonings that culminated in so many fatalities on New Year's Day 1927 actually commenced a week earlier, on Christmas:

It was Christmas Eve 1926, the streets aglitter with snow and lights, when the man afraid of Santa Claus stumbled into the emergency room at New York City's Bellevue Hospital. He was flushed, gasping with fear: Santa Claus, he kept telling the nurses, was just behind him, wielding a baseball bat.

Before hospital staff realized how sick he was—the alcohol-induced hallucination was just a symptom—the man died. So did another holiday partygoer. And another. As dusk fell on Christmas, the hospital staff tallied up more than 60 people made desperately ill by alcohol and eight dead from it. Within the next two days, yet another 23 people died in the city from celebrating the season.

As for the claim that some 10,000 people died of alcohol poisoning during the course of Prohibition through its repeal in 1933, that, too, is a figure we can source to Blum (who did not, in the Slate article, specify where this estimate came from):

Frustrated that people continued to consume so much alcohol even after it was banned, federal officials had decided to try a different kind of enforcement. They ordered the poisoning of industrial alcohols manufactured in the United States, products regularly stolen by bootleggers and resold as drinkable spirits. The idea was to scare people into giving up illicit drinking. Instead, by the time Prohibition ended in 1933, the federal poisoning program, by some estimates, had killed at least 10,000 people.

In sum, federal attempts to reduce the palatability of industrial alcohol came well before Prohibition, and efforts to intensify the risks of consuming it were both well-known and controversial at the time. Such evidence as we've seen does not support the the implication that the government set out to purposely kill drinkers of alcohol, although Prohibition-era lawmakers and public health experts decried what they described as a callous disregard for those who died as result of drinking denatured alcohol.