A single-source statement from an Iranian leader suggested unnamed Republicans had attempted to delay the release of American prisoners until the upcoming election, but the claim didn't seem very plausible. 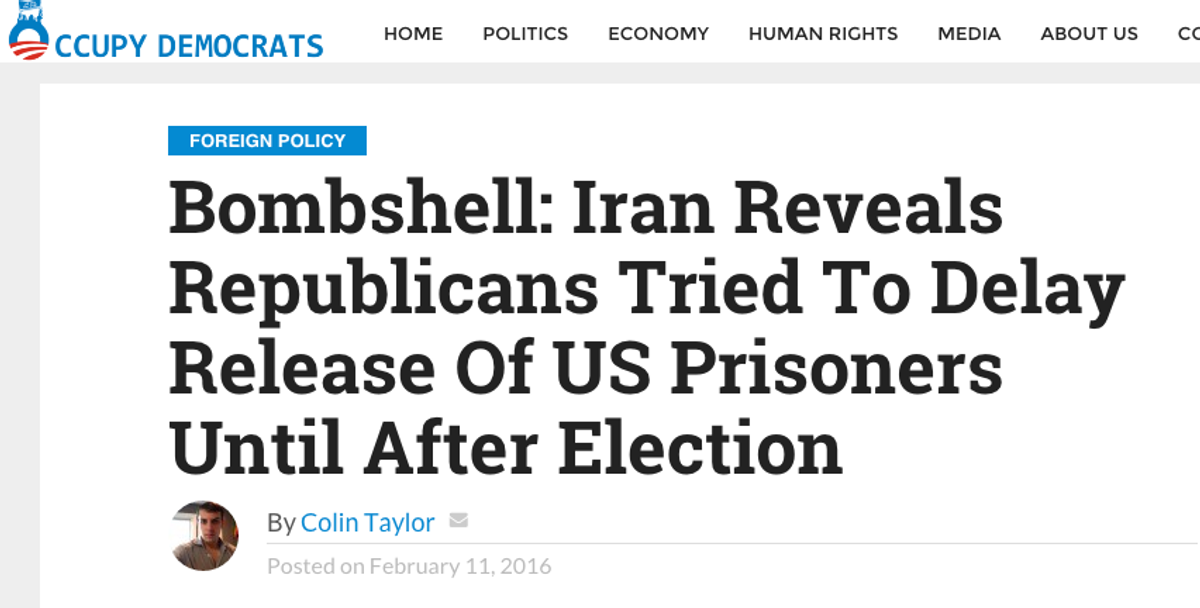 Claim:
Republicans attempted to stall the release of American prisoners held in Iran in a failed 'October Surprise' ploy.
Rating:

On 11 February 2016, the web site Occupy Democrats published an article maintaining unequivocally that unspecified "Republicans in Congress" had sought to stall the release of American prisoners held by Iran until "the eve of" the 2016 presidential election:

Shocking new revelations appear to show that the Republicans in Congress are insisting in pursuing their treasonous efforts to go around the President's back and derail his foreign policy agenda. Last year, led by Sen. Tom Cotton (R-AR), forty-seven Republican traitors sent a letter to the Iranian government in an attempt to scare them out of the President's historic nuclear peace accord. Republicans in Congress were then caught taking bribes from foreign governments in exchange for their efforts against the White House.

But this time, they have gone too far. The Secretary of Iran's Supreme National Security Council (SNSC), Ali Shamkhani, alleges that Congressional Republicans attempted to parlay with the Iranian government in an attempt to postpone the recent prisoner exchange until after the election

Readers asking about the article's compelling assertions often remarked that the claim was not reported widely, nor they could find any confirming source. However, Gawker published an article which took a more skeptical view of the ambiguous, extraordinary claim and raised some important basic questions:

Ali Shamkhani, chief of Iran's Supreme National Security Council, claimed today that U.S. Republican officials reached out to Tehran asking that the recent release of four American prisoners be delayed until after the upcoming presidential election. There are very good reasons to be skeptical of Shamkhani's claim. If it is true, it is completely insane. ... The implication is that these mystery Republicans wanted their own party to receive credit for freeing the Americans, and that they were willing to let their countrymen sit in an overseas jail for 11 more months to get it.

But the idea of GOP lawmakers reaching out directly to Iran to strike a backchannel deal seems pretty dubious. For one, they would have to contend with the likelihood that communications with such a volatile actor would be surveilled by the U.S. Intelligence Community. For another, the GOP party line advocates for all-out war against the country. What Republican in his right mind would think he had influence there?

The claim was also covered by the blog Talking Points Memo in a piece that detailed an accord in which the release of four American citizens detained in Iran was brokered in a swap amid larger negotiations over a nuclear treaty — prisoners who would have lingered in captivity for an additional eleven months had the assertions of Republican interference had any merit:

The prisoner swap Shamkhani referred to included Washington Post journalist Jason Rezaian and three other U.S. citizens imprisoned in Iran, who were freed in exchange for the release of seven Iranians.

The swap was negotiated alongside the White House's nuclear deal with Iran, and the prisoners were released just before the economic sanctions on Iran were set to lift as part of the nuclear deal.

All published reports were sourced from a single 11 February 2016 item published by Iran's Tasnim News Agency. According to that single source foreign report, Iran's Supreme National Security Council Secretary Ali Shamkhani made the claim in the course of an address referencing a negotiated prisoner exchange with the United States:

Secretary of Iran's Supreme National Security Council (SNSC) Ali Shamkhani said a recent prisoner exchange between Iran and the US went ahead as planned despite calls by Republicans for a delay until US presidential elections.

"In the course of the talks for exchanging prisoners, the Republican rivals of the current US administration who claim to be humanitarians and advocates of human rights sent a message telling us not to release these people (American prisoners) and continue this process (of talks) until the eve of US presidential elections," Shamkhani said in an address to a rally held in the central city of Yazd to mark the 37th anniversary of the 1979 Islamic Revolution’s victory.

"However" he said "we acted upon our independent resolve and moved the process forward."

Iran's move to exchange prisoners was based on the country's humanitarian approach and was made in accordance with ensuring the country's interests and securing the release of Iranian citizens in the US, he added.

Shamkhani underlined that on the issue of prisoner swap, Iran proved that it is not influenced by any foreign or domestic pressure but acts against spies and infiltrators decisively. ... Amir Mirzaee Hekmati, Jason Rezaian, Saeed Abedini, and Nosratollah Khosravi, who hold US citizenship, were among the released prisoners.

As noted earlier, Shamkhani's allegation raised a number of questions with respect to both plausibility and rudimentary detail. No actors from the Republican party were specifically described in the spoken claim (even by number, much less name), nor were any details provided about how or when the request was presented to Iran. The political damage to the Republican party risked by such a disclosure would itself serve as a significant barrier to its usefulness of such ploy as an election-related bargaining chip should the plot have been revealed in the fashion Shamkhani purportedly disclosed it. The potential return on investment for such a large political gamble was somewhat minimal, as the gains afforded by a strategically-timed, election-coincident swap would pale in comparison to the inevitable massive backlash that would ensue should the plan be revealed.

Shamkhani framed his alleged example of Republican perfidy as support for Iran's assertion of immunity to foreign pressure, making it seem less like a truthful disclosure and more like a parable intended to rouse the faithful during a rally speech. And even had the release of prisoners been delayed until the "eve of the election," the party currently occupying the White House (i.e., Democrats) would quite possibly reap more political points for the swap than the Republicans would, rendering the claim as presented even less plausible.