"Spending the night in the barn is free!" was an unexpected yet lovely find during our research. 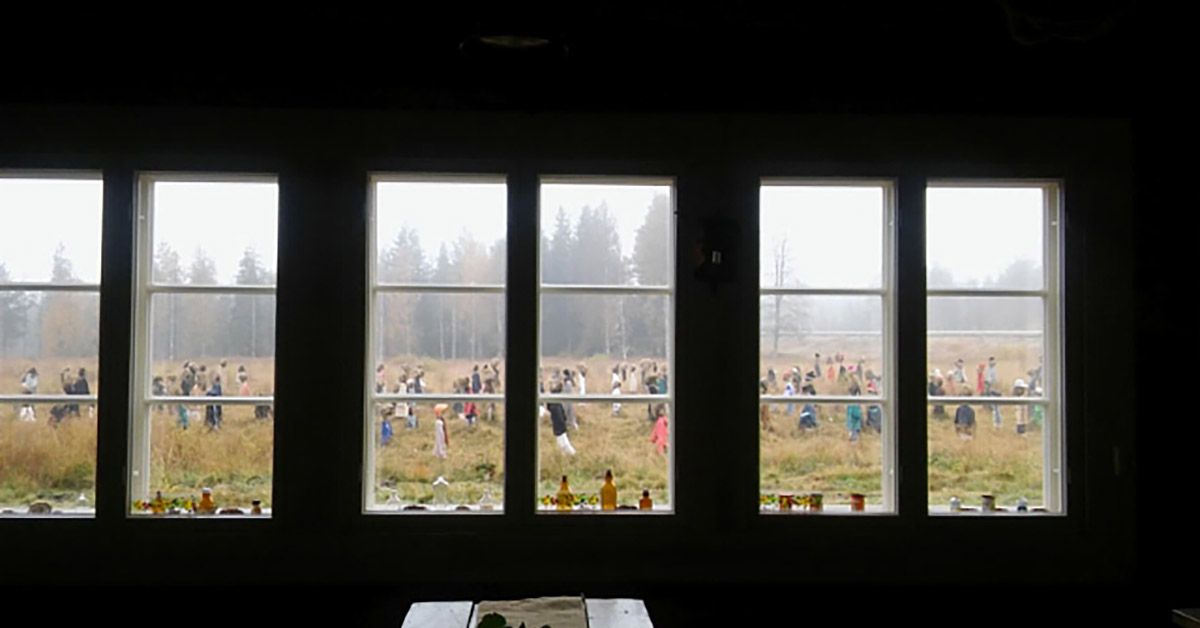 Claim:
A TikTok video showed the discovery of "zombies" in images on Google Maps.
Rating:

This is not be the first time we've covered purportedly scary finds on satellite images.

The "zombies" video that @google.earth.thingss posted has racked up 1.1 million views and counting. It began with a satellite view of a rural area: The first part of the "zombies" video from Google Maps showed an aerial view.

The Google Maps view zoomed in closer to the ground, with the words "Hiljainen kansa tilataideteos Reijo Kela" visible on the screen: The video ended with a low quality Google Street View image that depicted what the video referred to as "zombies" roaming a field: The TikTok video obviously did not show a large field of  actual "zombies" on Google Maps. While most of the top comments referred to the television series "The Walking Dead," it turned out that the image showed part of an art installation.

The text from the TikTok video, "Hiljainen kansa tilataideteos Reijo Kela," roughly translates to "A Quiet People Spatial Artwork by Reijo Kela." The field was full of nearly 1,000 "hay heads" along Highway 5 in Suomussalmi, Finland. The real name of the art installation was "The Quiet People." It was also referred to in several places as "Silent People":

The website for "The Quiet People" said that "travellers on Highway 5 are greeted by a peculiar sight of people-like figures."

These hay heads appeared in Suomussalmi for the first time in 1988 when dancer and choreographer Reijo Kela created them as part of his Ilmarin kynnös performance. He created the People as part of the performance in the Lassila field at Suomussalmi.

The next appearance of these hay heads occurred in Helsinki in 1994 when the Kainuu region presented itself at Senaatintori. During the night, the People appeared on the stairs of Helsinki Cathedral. In the morning, there were 700 hay heads standing on the stairs, confounding the market place visitors and passers-by. When the event at Senaatintori was over, the People disappeared as abruptly as they had appeared.

The People were part of a performance "Kauniit ja rohkeat, rantojen raukat" ("The Bold and the Beautiful, the Wretches of the Beaches") by Reijo Kela and Heikki Laitinen in 1994. They held the performance at the beach of Joenuoma, Ämmänsaari.

The Silent People found their current home in the autumn 1994.

"The Quiet People" figures are "clothed with new, clean clothes twice a year, at the beginning of the summer and in the autumn." They also "receive new heads straight from the field at the beginning of every summer." Their clothes are from donations. The art installation is located next to the Niittykahvila Café, which offers Finnish crepes to visitors. The Meadow Cottage restaurant is also part of the same property.

Also offered by the same website is a free night in the hay barn for any travelers needing a night of rest:

We offer travellers a unique opportunity to travel back in time. Back to when haymaking took weeks and labourers slept in the barn.

Now you can spend an unforgettable night in our hay barn! You can enjoy the peace of nature and wake up to the singing of birds.

The barn accommodates eight people comfortably. All you need is a sleeping bag. We rent mosquito nets when needed.

Spending the night in the barn is free! You can choose something to eat in the evening and morning from our selection and, of course, drink your morning coffee made in the fire-roasting kettle. It is a nice point from which to continue your journey.

The website also offered a video of the art installation shot from a drone, plus a 360-degree video at 4K quality:

The property may have somewhat reminded a few visitors of Schrute Farms, the fictional location run by a character named Dwight Schrute on the American television series, "The Office." At least a few times on the show, Schrute brought up haymaking, and even mentioned Finland near the end of an entry in his now-defunct Schrute-Space blog.

The TikTok video that appeared to some viewers to be a Google Maps discovery of a spooky field filled with "zombies" turned out to be nothing more than a lovely stop for anyone visiting Finland in the future.

March 17, 2021: This story was updated with a new picture to show what TikTok users saw in the field in Finland.