Was a 'Super Rabbit' Hit by a Google Maps Street View Car?

We were left with questions after watching a TikTok video that appeared to show a hare being launched into the air by a Google Maps Street View car. 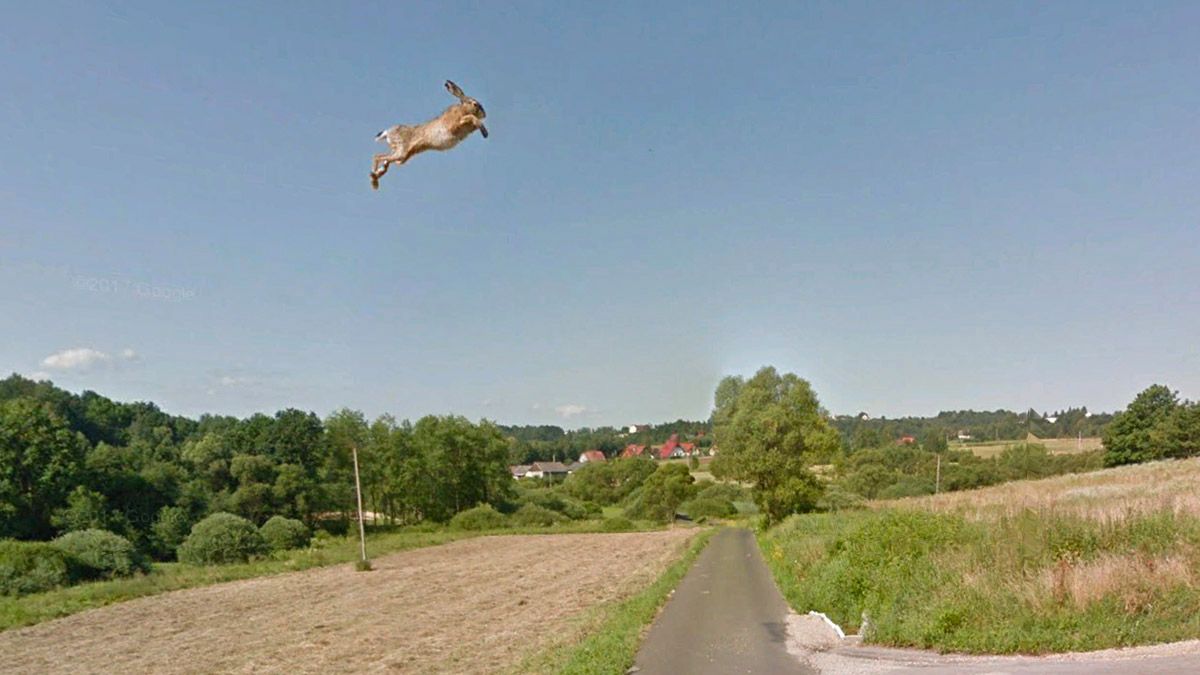 Claim:
A Google Maps Street View car hit a hare or rabbit, as shown in photos taken by one of its cars.
Rating:

Some 360-degree pictures on Google Street View showed a hare or rabbit being launched into the air. It appeared to have come into contact with the car that was taking the photographs. As the car drove away, it captured photos of the animal flailing in the air and landing on its back. It's unclear if it survived.

In late April 2021, TikTok user @googlemapsfun posted a video of a purported "super rabbit," which appeared to be a hare, caught on a Google Maps Street View camera. The TikTok channel, which concentrates on interesting finds in Google Earth, was viewed 43 million times in its one to two weeks.

The audio in the video is quite loud, so we recommend lowering your volume before pressing play.

It shows the animal, which was identified as a "super rabbit" in the video, appearing to be upright and soaring through the air like a superhero.

Absent from the video and most of the comments was information regarding where this happened. We also sought out to learn what happened to the animal.

The TikTok video provided only one solid clue: the street name. "Biała Droga" was displayed on the ground. This led us to Poland.

The incident appeared to have occurred right around Biała Droga 2-6, 32-040 Olszowice, Poland.

Did the Animal Survive?

Looking at the sequence of 360-degree pictures frame-by-frame showed more than the TikTok video revealed.

First, in the initial photograph the animal was moving toward the road: Heading directly onto the roadway.

In the next picture, it appeared to have been hit by the front side of the car, perhaps the bumper: It's unclear what speed the car was traveling at.

It then showed up on the other side of the car: The nature of how the 360-degree camera captures photographs is why the animal looks stretched in this view.

The fourth frame is the moment that was seen in the video, which the TikTok user dubbed "super rabbit."

For it to get this high and not be a glitch, the animal might have hit the front bumper and then the windshield, launching it into the sky. However, there isn't enough evidence to say for certain how it ended up this high in the air: "Super rabbit," as claimed in the TikTok video.

The animal's limbs might have been limp in the fifth photograph as it tossed around in the air: The animal's shadow appeared on the road in a few of the pictures.

A pixelation problem was visible in the next picture, but the animal appeared to be upside down as it fell to land on the ground: The animal's head appears to be upside down here.

In the seventh and final frame in which the animal was visible, it looked like it landed on its head or back. Its legs were pointing up: It's unclear if the hare or rabbit survived the incident.

No more evidence was available, as the animal didn't appear in the next picture as the car continued to drive away.

Readers looking to find discussion about the strange moment on Google Maps Street View should look no further than Reddit. The pictures have appeared on Reddit a seemingly endless amount of times in the past.

The Reddit threads had varying titles. Some examples included "Magic bunny," "Rabbit getting hit by google maps car," "flying rabbit caught on google maps!," and "Hare runs across the road in front of Google Maps car."

In sum, according to photos from a Google Maps Street View car, the vehicle hit what appeared to be a hare and launched it into the air. It's unclear if it survived, as it was last visible landing on its back.