While some might argue that Goofy is actually a cow and not a dog, the popular character can most accurately be described as a cartoon. 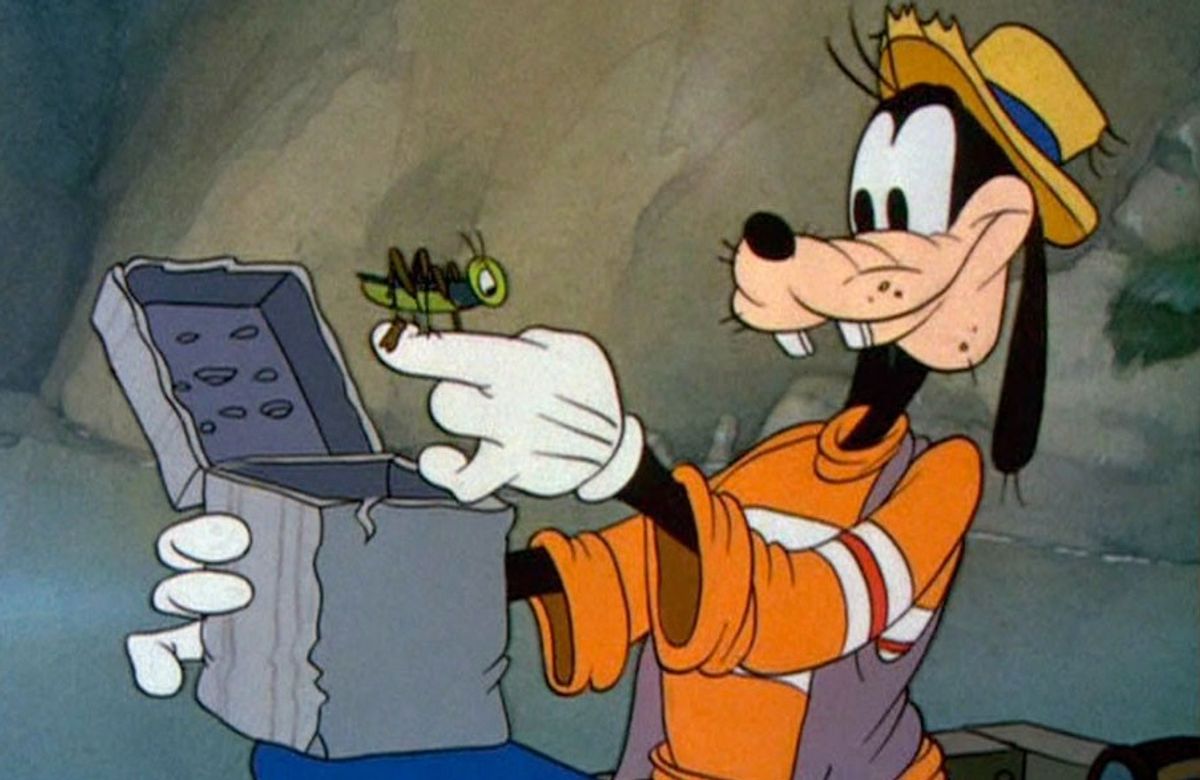 Claim:
The Disney cartoon character Goofy was modeled after a breed of Scottish cow.
Rating:

Classic Disney cartoons have proved to be a consistent source of conspiracy theories, rumors, and urban legends. For instance, we've previously investigated claims that Winnie the Pooh was actually a girl (Mostly False), that the Seven Dwarfs were modeled on cocaine addiction (False) and that a topless woman could briefly be spotted in VHS copies of "The Rescuers" (True).

In January 2019, we encountered yet another Disney rumor: This time, the internet asked, is the Goofy cartoon character actually a cow rather than an (anthropomorphic) dog?

Although this dog vs. cow debate wasn't entirely new in 2019, that time around it was supposedly supported by an "investigative article" published in 2012 by the website Reel Rundown. While that article did contain some factual information regarding the history of the Goofy character, which is likely the reason why some people have accepted it as a truthful account of Goofy's supposed sordid past, it is peppered with exaggerations, speculation, outright fabrications, and was clearly written with humorous intentions.

Reel Rundown presented their argument as if they were uncovering a vast Disney conspiracy theory aimed at covering up Goofy's unsavory bovine heritage. In the introductory section, entitled "Goofy Is Not a Dog -- The Cover Up," the author argued that Goofy was actually a foreign-born cow and that Disney was forced to conceal this fact due to the political climate in the 1930s:

Goofy has always been thought of as a "dog with human features" according to Disney's Mouselinks. However what the Disney establishment isn't telling you is the goofy is really a cow. To be specific an Aberdeen-Angus Cattle. A fact that Disney would love to cover-up considering that Goofy's national origin is anything but American. In 1939 with American nationalism at an historic high, Goofy's true heritage could have created a huge scandal for Disney. A Scandal that would have finished Goofies [sic] career just as it was starting to take-off."

The next section, "Goofy's Heritage Revealed," was even more outlandish. Reel Rundown imagined Goofy as a living, breathing, physical animal who was born "Dipalwa Dawala" to Egyptian immigrants in Scotland and was "discovered by Disney talent scouts during a livestock sale." During the "Dark Years" section of the article, the website upped the absurdity and claimed that Goofy's son died from Mad Cow disease.

For those who took the time to read the article, it should have been obvious that it was a work of humorous fiction. However, it seems that some readers stopped at the headline and were left convinced that Goofy was actually a cow, not a dog: Although this article was clearly written in jest, some of its curious claims have been spread in support of the "Goofy is a cow" argument. We'll dispel some of this misinformation to stop malicious propagation of rumors about this beloved Disney dog.

Was Goofy "born" to Egyptian immigrants in Scotland and named "Dipalwa Dawala?"

First off, Goofy wasn't "born" anywhere: He was created by Disney animators Art Babbitt and Frank Webb in the 1930s. Goofy was introduced as a side character named "Dippy Dawg" in the cartoon short Mickey's Revue (1932) but underwent some revisions over the next few years. While Goofy has gone by a number of names during his Disney career (including Super Goof, Dippy Dawg, George G. Geef, Goofus D. Dawg, and Goofy Goof), we were unable to find any credible source listing the character as "Dipalwa Dawala."

In fact, the only search results we could find for this term all point back to this Reel Rundown article. In other words, Goofy has never been named "Dipalw Dawala."

Does Goofy's old love interest, Clarabelle the Cow, prove that Goofy is also a cow?

Reel Rundown ended their humorous work of fiction with an "evidence" section claiming that Disney's history of creating same species couples (Mickey and Minnie, Donald and Daisy, etc.) pointed to Goofy's being a cow since he once had a love interest named Clarabele Cow:

Goofy's love interest in the Mickey Mouse clubhouse is Clarabelle the Cow. The on-screen chemistry is obvious. Disney often couples characters with the opposite sex of the same species. Mickey and Mini, Donald and Daisey [sic] both follow this pattern. So why would the writers at Disney have Goofy and Clarabelle coupled up?

While it's true that Goofy and Clarabelle Cow were once an item, this is not proof that they were the same species of animal. Clarabelle was the sometimes girlfriend of Horace Horsecollar, who was a horse and not a cow, and the Disney universe includes multiple examples of inter-species couples: Ben Ali Gator, for instance, woos Hyacinth Hippo in Fantasia; Jessica Rabbit (a cartoon human) has a rabbit husband in Who Framed Roger Rabbit, and Miss Piggy and Kermit the Frog have an ongoing (if one-sided) relationship in the Muppet canon. Outside the Disney universe, Bimbo, a cartoon dog, was the occasional love interest of Betty Boop (a human female), and of course, Tillie Tiger once planted a kiss on Elmer Elephant: The Reel Rundown article was clearly a jape. However, it made us curious about Goofy's actual origins and whether the character was originally intended to represent a dog.

In Art Babbitt's character analysis of Goofy from 1934 (available via the website of animator Michael Sporn), Goofy is described as a "composite of an everlasting optimist, a gullible Good Samaritan, a half-wit, a shiftless, good-natured coloured boy and a hick." In his description of how Goofy should be drawn, Babbit mentioned two real-world creatures, neither of which was a cow:

It is true that there is a vague similarity in the construction of the Goof’s head and Pluto’s. The use of the eyes, mouth and ears are entirely different. One is dog, the other human. The Goof’s head can be thought of in terms of a caricature of a person with a pointed dome—large, dreamy eyes, buck teeth and weak chin, a large mouth, a thick lower lip, a fat tongue and a bulbous nose that grows larger on its way out and turns up. His eyes should remain partly closed to help give him a stupid, sloppy appearance, as though he were constantly straining to remain awake, but of course they can open wide for expressions or accents. He blinks quite a bit. His ears for the most part are just trailing appendages and are not used in the same way as Pluto’s ears except for rare expressions. His brow is heavy and breaks the circle that outlines his skull.

When we reached out to Disney for comment, a spokesperson told us that both The Disney Animation Research Library and the Walt Disney Archives agreed that Goofy was indeed an anthropomorphic dog. Erin Glover, Director of Publicity and Communications at Disney Animation, told us:

The Disney Animation Research Library and the Walt Disney Archives agree that this question was best answered by Disney Legend Dave Smith: "Goofy was originally created as a human character with dog-like characteristics, thus why he walks upright, wears clothes, talks and has animal features that resemble a dog."