Did 'Golden Girls' Have a 'Penis Cake Pan' in the Kitchen?

We looked into whether Dorothy, Rose, Blanche, and Sophia had chosen to display a shiny, phallic object on the kitchen wall. 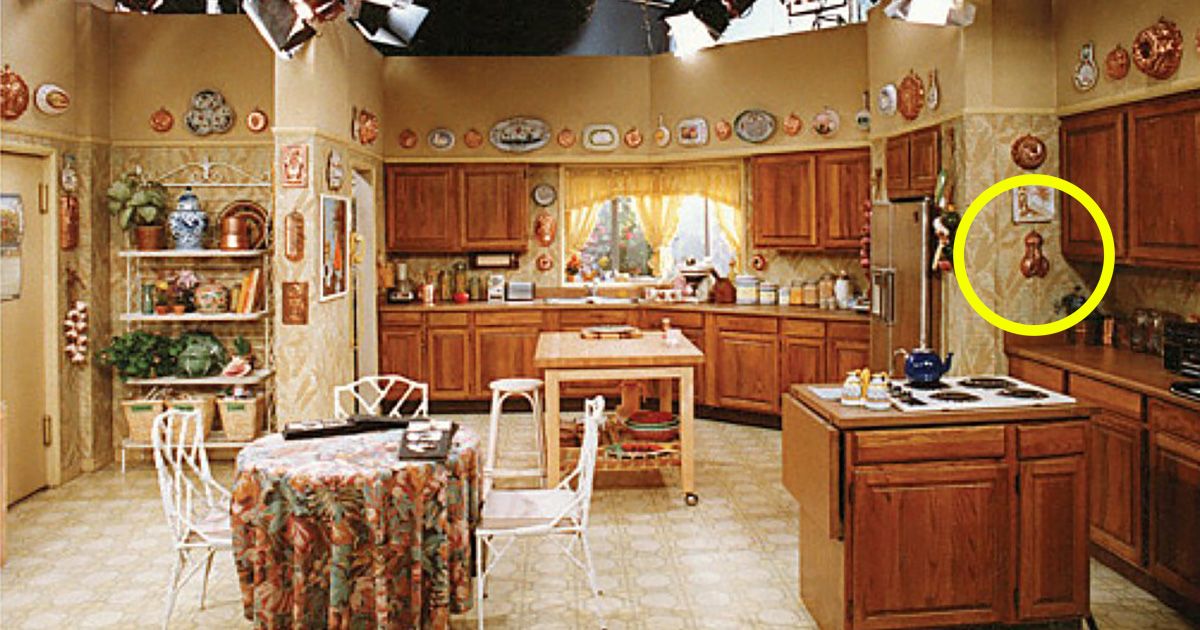 According to words used by Facebook users people believed that a penis or cock cake pan was on the kitchen wall on Golden Girls.

The object on the wall is a lobster tin that's hung by its tail, not a "penis cake pan."

In April 2022, readers asked whether a "penis cake pan" really was displayed on the kitchen wall of the TV show, "The Golden Girls." While the shiny object might appear to be somewhat phallic, the truth of the matter was that it was a lobster tin that was hung by its tail.

"Golden Girls" aired on NBC from 1985 through 1992. It starred Bea Arthur as Dorothy Zbornak, Betty White as Rose Nylund, Rue McClanahan as Blanche Devereaux, and Estelle Getty as Sophia Petrillo.

One reader sent us the following email:

This "Golden Girls" picture has been circulating on the internet stating there was a penis cake pan in their kitchen. I don't think that pan circled is a penis cake pan. I've watched a lot of episodes & I believe it is two measuring cups hanging on the same hook.

They also included the following picture: We found no shortage of Facebook and Twitter users who were fans of "Golden Girls" who appeared to believe the ladies in the house really had placed a "penis cake pan" on their kitchen wall:

At some point in the series, the phallic object appeared to have been moved either to or away from being above the window. "When you’re watching 'Golden Girls' with your mom and notice a penis cake pan hanging from the wall," this user posted:

It's unclear how long the "penis cake pan" rumor has been spreading among fans of "Golden Girls." It's not out of the question that some viewers may have discussed the object on the wall decades ago during the show's original run.

The purported "penis cake pan" is visible in many "Golden Girls" scenes, including this one:

While the object on "Golden Girls" might appear like a penis, the reality of the situation was revealed by Valerie Burns of Nostalgenic.com. The website reported that it was simply a lobster tin used for jello, "a little piece of 70s and 80s nostalgia" that was "very common in American households at the time."

Nostalgenic.com is offering the tins on their store for $30 each, as is the YouGo90s.com website.

We turned one of their product photographs upside down and placed it next to a picture of a "Golden Girls" episode from a Facebook post: On Dec. 31, 2021, one Facebook user posted finding a similar "lobster penis pan" in a thrift store. Hours later, the user reported learning that White, one of the four stars on "Golden Girls," had just died at age 99:

Fans of the show continued to have good fun with the rumor after White's death. She was the last of the show's four stars to pass away:

Aside from "Golden Girls," an eagle-eyed Facebook user spotted a similar "penis cake pan" that was actually a lobster tin on another TV series: "All in the Family."

We also found a discussion on the r/wildlypenis subreddit on Reddit where users discussed the tins in both shows.

In sum, there's no "penis cake pan" on "Golden Girls." It's simply a lobster tin hanging by the tip of its tail.

Burns, Valerie. “Is That a Penis Cake Pan on the Golden Girls Wall?” Nostalgenic.com, 9 July 2020, https://nostalgenic.com/blogs/goldengrams/is-that-a-penis-cake-pan-on-the-golden-girls-wall.