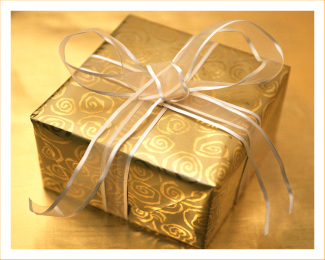 Glurge:   A little girl gives her parent a gold-wrapped box filled with kisses, then dies.

It's said that we have a choice to make. I've chosen. Now it's your turn to choose. The story goes that some time ago, a man punished his daughter for wasting a roll of expensive gold wrapping paper. Money was tight and he became even more upset when the child pasted the gold paper so as to decorate a box to put under the Christmas tree. Nevertheless, the little girl brought the gift box to her father the next morning and said, "This is for you, Daddy." The father was embarrassed by his earlier overreaction, but his anger flared again when he found the box was empty. He spoke to her in a harsh manner: "Don't you know, young lady, when you give someone a present there's supposed to be something inside the package?

The little girl looked up at him with tears in her eyes and said: "Daddy, it's not empty. I blew kisses into it until it was full."

The father was crushed. He fell on his knees and put his arms around his little girl, and he begged her to forgive him for his unnecessary anger.

An accident took the life of the child only a short time later and it is told that the father kept that gold box by his bed for all the years of his life. And whenever he was discouraged or faced difficult problems he would open the box and take out an imaginary kiss and remember the love of the child who had put it there.

Origins:   Variously titled "Gold Wrapping Paper" and "The Gold Box," this piece has been reproduced in a number of inspirational and books and was even read into the record of the Australian Parliament in 2001 by one of the members of that body.

The common Internet-circulated version of this item is based on a longer first-person account given by Margaret Fishback Powers in her 1993 book Footprints: The True Story Behind the Poem That Inspired Millions. Although Powers asserts she penned the "Footprints" poem when she was a young woman searching for direction at the crossroads in her life, her claim is disputed by the estate of Mary Stevenson, which supports

their declaration of Stevenson's 1936 authorship of the poem with a handwritten copy dated 1939. That date has been at least somewhat confirmed by a 1997 forensic examination of the document that authenticated the paper and the handwriting as old.)

Powers' account of the gold-wrapped box story takes place at Christmas 1972 during a time when she, her husband, and their two daughters had precious little to live on. Part of their last forty dollars (which was to be used for groceries and gasoline) was spent on gold wrapping paper, an act that incited the husband to scream at his wife for being wasteful. Later that evening he discovered their youngest child had used all of the paper to wrap what looked to be a shoebox, an act that prompted him to grab her by one arm, jerk her into the air, and slap her hard several times. The next morning, after kicking the wrapped box out of the way, his little daughter informed him it was a present for him. According to Powers:

Paul took it and shook it gently, but it was very light and nothing rattled inside. The tape all over the box made it hard to unwrap and his frustration and impatience once again spilled over. He ripped it open, but when he looked inside, there was nothing there. With his temper no longer in check, he said sharply "Christina! Don't you know you should put something in a box before you wrap it up as a gift?"

Tears were streaming down her little face as she said, "But Daddy, I did put something in it. I blew kisses into it! It's full of love just for you!"

According to Powers, their daughter's statement impelled her husband to drop to his knees, hug the little one and beg her for forgiveness, then hug his wife and other child, begging them for forgiveness as well. "Paul received a healing within at that moment — the enemy, his anger, died. He cried out to God for help and received it."

The details of the online version (which is a restatement of the Powers story by someone who had either read the tale in her book or heard it from either of the Powers during their ministries) shift from telling to telling: the child's age is variously given as four or five years, and the parent can be either the mother or the father. It also adds the heart-wrenching element of the little girl's subsequent death and the father's seeking solace during difficult times by opening the box and taking one of the imaginary kisses from it. Our earliest collected online version of this piece dates to December 2000 and includes the following coda, leading us to believe its unknown Internet author wanted to position it as a religious piece stressing God's unconditional love:

In a very real sense, each of us as humans, have been given a gold container filled with unconditional love and kisses from our children, friends, family, and especially our CREATOR. There is no more precious possession anyone could hold than that wonderful gold box of ours.

Later versions omit that point, repositioning the item into one about the importance of treasuring children even when that act means dealing gently with their transgressions. In this story about wasted wrapping paper, the parent's anger melts into remorse as he hears his daughter's explanation of the box's contents. Remorse is a standard element in glurge tales (e.g., an enraged father smashes his toddler son's fingers with a hammer, then commits suicide upon realizing what he has done; the family dispatches their blood-covered dog only to afterwards discover he'd defended their child from a snake or wolf). In the wrapping paper tale, that remorse finds expression in the detail about the child's subsequent death — the grieving parent is left with only memories of his child and an empty box.

As to whether this is a true story, while just about anything is possible with children, this tale is best regarded as a fable about appreciating the value of people over material things.