Was the Queen's Golden Piano First Owned by Saddam Hussein?

A tweet claimed that Queen Elizabeth II once posed in front of a gold-colored piano in Buckingham Palace that was "stolen" from Iraq. 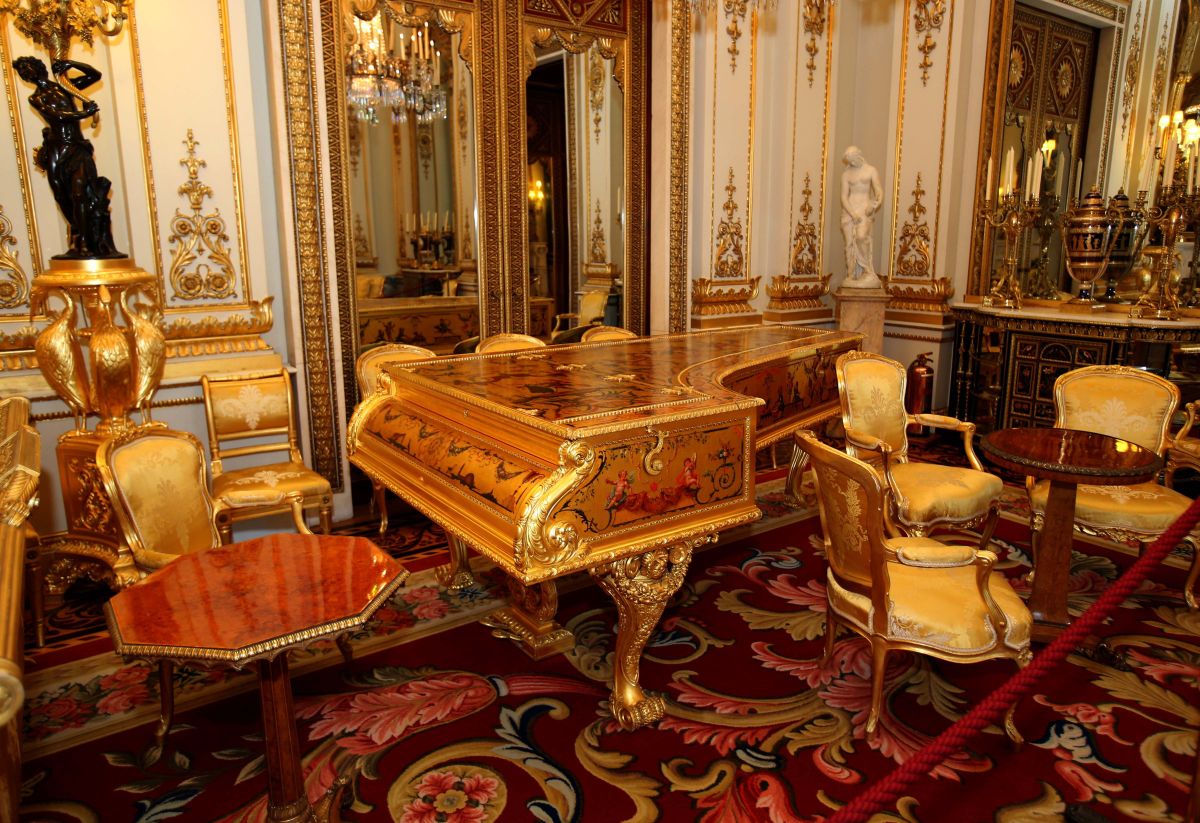 Claim:
The gold-colored piano located in the White Drawing Room in Buckingham Palace was "stolen" or "rescued" from Iraq.
Rating:

On July 24, 2020, a false tweet was posted that claimed Queen Elizabeth II had posed in front of a gold-colored piano that was "stolen" from former Iraq President Saddam Hussein. It read, "The golden piano is owned by the Iraqi President Saddam Hussein. It was stolen from Iraq during the Gulf War. And it was recently seen behind Elizabeth the Queen of Britain in the Royal Palace!"

The picture of the queen was from her Christmas message that was issued in December 2018.

Shortly after the message was broadcast, a tweet from a since-suspended Twitter account named @JackieBhird appeared to have started the rumor. The account may have been a parody of Scottish journalist Jackie Bird. The tweet read, "Her majesty's gold piano was rescued from Sadam [sic] Hussain's palace during the Gulf war. BBC - News @BBCScotlandNews #goldpiano."

The false rumor may have been born out of the history of Hussein's links to the ownership of gold bars, a gold-plated AK-47 assault rifle, and perhaps other gold-colored items.

First, here's some background on the tweet's mention of the Persian Gulf War, a conflict with a timeline spanning late 1990 and early 1991.

According to the Royal British Legion, a coalition air war known as Operation Desert Storm began on Jan. 17, 1991. The coalition set its sights on striking "military, economic, and communications targets in Iraq and Kuwait to force Iraqi troops to withdraw." The war ended within weeks, with a cease-fire being announced at the end of February.

The History of the Gold Piano

According to a YouTube video produced by the Royal Collection Trust in 2019, the gold piano shown in the tweet was part of the White Drawing Room in Buckingham Palace. It was not "stolen" or "rescued" from Hussein in the early 1990s. The history of the gold piano dated all the way back to 1856, when it was ordered by the queen's great-great-grandmother Queen Victoria from the London firm of Érard.

A black-and-white picture hosted by the Getty Images website showed the piano in the White Drawing Room in 1947.

David Winston, a piano restorer and conservator, said it had taken an entire year to restore the gold piano. He also spoke about the history of its design:

There's an intriguing aspect to this piano. In 1839 in her journal, Queen Victoria wrote that she'd sat down in her drawing room with Lord Melbourne and he had admired her new piano. Particularly, he liked the monkeys on it. Now that was in 1839, long before this piano existed. But it seems to accord with an account we have much later in 1856, for removing the decorations of the earlier piano and placing them on the new one.

So Queen Victoria so liked this strangely old fashioned, 18th-century French style which is known as "singerie" with monkeys all over it engaged in musical pursuits that she actually asked for the decorations of the earlier piano to be laboriously transferred to the new one. On the lid, there's a brass molding that goes right the way round and it encloses the outline of an earlier piano lid, a slightly smaller one.

A Gift from Mendelssohn

Jonathan Marsden, the director of the Royal Collection Trust, said that the gold piano was likely to have been played by Queen Victoria and Prince Albert in the same room where it rests today. He also added an interesting bit of history about the royal family's relationship with German composer Felix Mendelssohn:

Well, there's absolutely no doubt that Queen Victoria and Prince Albert would have both played this instrument and probably in this very room and probably together.

Of course, there were only 5 years left for Prince Albert at the time it was commissioned. And although I have no doubt they would have played the work of Mendelssohn on the piano it must be pointed out that he couldn't have played it, he having died much earlier in 1847.

But the wonderful thing about his many visits to Buckingham Palace, which were so very informal and frequent in the 1840s, is that on one occasion as a sort of thank you he wrote them a specially arranged four-handed version of one of his famous 'Songs Without Words,' the manuscript of which still remains in the Royal Collection and I would love to think that they played it together on this beautiful piano.

In sum, the rumor was false that said the gold piano pictured behind the queen during her Christmas message in 2018 was "stolen" or "rescued" from Iraq. The truth was that it was ordered by Queen Victoria in 1856 and had nothing to do with Hussein, Iraq, or the Middle East.