Did a GoFundMe Campaign to Fund a Border Wall Raise Millions of Dollars Within a Few Days?

In the midst of a budget standoff between Congressional Democrats and the White House, some Americans sought to take matters into their own hands. 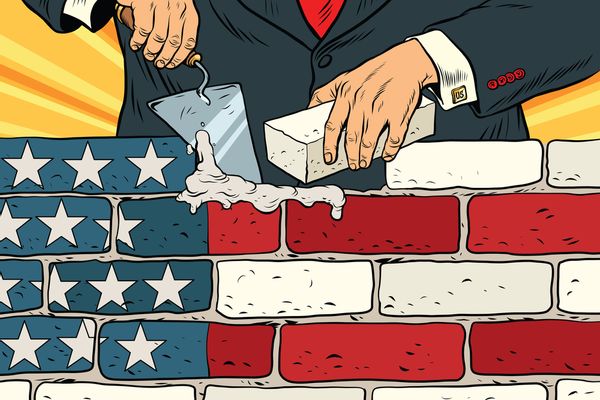 Claim:
A GoFundMe campaign raised millions of dollars for the construction of a border wall within a few days of its launch in December 2018.
Rating:

In December 2018, reports emerged that an online crowd-funding campaign was attempting to circumvent an ongoing budget standoff between the White House and Congressional Democrats. The fight was over $5 billion in annual funding demanded by President Donald Trump for his long-promised wall along the southern border of the United States.

CNBC reported that "A fundraiser to build a wall along the U.S.-Mexico border has raised nearly $5 million in three days on the online platform GoFundMe." Politico wrote: "Brian Kolfage, a 37-year-old Florida resident who was severely wounded in the Iraq war, has started a GoFundMe campaign to complete Trump's signature pledge. The campaign has raised over $4 million in the three days since it started, with an overall goal of $1 billion."

The fundraiser is real. By 20 December, four days after it was started, the crowd-funding campaign called "We the People Will Fund the Wall" had raised more than $7 million.

The man behind it, Brian Kolfage, is an Air Force veteran who lost three of his limbs while deployed in Iraq and was awarded a Purple Heart in 2004. Kolfage is also an outspoken supporter of the current president, and he frequently shares his conservative political views on social media.

He was previously an administrator of the Right Wing News Facebook page, which was one of hundreds removed from the social networking platform in October for what Facebook described as "inauthentic activity." As of 20 December, Kolfage was listed as a "social media and advertising strategist" for the RightWing.News website, which has a track record of publishing junk news and hyper-partisan conspiracy theories, some of which we have previously debunked.

Kolfage also ran a now-defunct affiliate website of Right Wing News called Freedom Daily, whose long record of producing often racially inflammatory junk news we have repeatedly documented. In February 2018, Freedom Daily was one of several such sites sued for defamation in federal court for falsely identifying a Michigan teenager as being responsible for the killing of Heather Heyer, an anti-racist counter-protester at the August 2017 Unite the Right rally in Charlottesville, Virginia.

The description on his crowd-funding campaign page for the border wall reads:

Like a majority of those American citizens who voted to elect President Donald J Trump, we voted for him to Make America Great Again. President Trump’s main campaign promise was to BUILD THE WALL. And as he’s followed through on just about every promise so far, this wall project needs to be completed still.

As a veteran who has given so much, 3 limbs, I feel deeply invested to this nation to ensure future generations have everything we have today. Too many Americans have been murdered by illegal aliens and too many illegals are taking advantage of the United States taxpayers with no means of ever contributing to our society.

I have grandparents who immigrated to America legally, they did it the correct way and it's time we uphold our laws, and get this wall BUILT! It’s up to Americans to help out and pitch in to get this project rolling. "If the 63 million people who voted for Trump each pledge $80, we can build the wall.” That equates to roughly 5 Billion Dollars, even if we get half, that's half the wall. We can do this.

Democrats are going to stall this project by every means possible and play political games to ensure President Trump doesn’t get his [victory]. They'd rather see President Trump fail, than see America succeed. However, if we can fund a large portion of this wall, it will jumpstart things and will be less money Trump has to secure from our politicians. This won’t be easy, but it’s our duty as citizens. This needs to be shared every single day by each of you on social media. We can do it, and we can help President Trump make America safe again!

The campaign is real, but it's not clear how it might function, and whether it could make even a small contribution to the actual cost of any border-wall construction.

Kolfage's claim that "if the 63 million people who voted for Trump each pledge $80, we can build the wall" seems highly inaccurate. It's true that 63 million people did vote for Donald Trump in the 2016 presidential election, and $80 from each of those would amount to roughly $5 billion.

However, $5 billion is the amount that Trump had demanded to be set aside for the border wall just in the 2019 budget, before he appeared to back away from that demand in December 2018. No study or report exists that estimates the likely total cost of constructing a border wall would be $5 billion.

Indeed, Trump himself has previously said he would need $25 billion to build the wall, before lowering his estimate to $15 or $20 billion. His administration has in the past requested $18 billion from Congress for just the first planned phase of construction.

In 2017, a leaked internal report prepared by the Department of Homeland Security put the estimated total cost of the wall at $21.6 billion, and a study conducted by Democratic Senate staff estimated it would cost as much as $70 billion to construct and $150 million per year to maintain.

In the first four days of the campaign, Kolfage raised around $7 million, which equates to $1.75 million per day. Even at that impressive rate (one that is unlikely to be sustained beyond the initial excitement and media attention surrounding the campaign), it would take 571 days to reach $1 billion.

This means Kolfage's campaign would only raise 20 percent of what Trump asked for in 2019 alone, halfway through 2020.

Based on Trump's most recent, reduced estimate for the total cost of the wall ($15-20 billion), it would take Kolfage's campaign between 23 and 31 years to pay for it, and that would only be possible if GoFundMe increased its current fundraising ceiling of $1 billion by between 1,400 and 1,900 percent. (We asked GoFundMe whether it was considering raising that cap, but we did not receive a response.)

Furthermore, in order to reach Trump's projected total cost of $15-20 billion, the 63 million Americans who voted for him in 2016 would have to contribute between $238 and $317 each, not the $80 per head presented by Kolfage.

In light of these facts, we asked Kolfage several questions, including whether he accepted that -- even if his $1 billion target was met in a timely manner -- it still would not be sufficient to cover the cost of a border wall, and what purpose, therefore, his campaign could serve.

We also asked Kolfage who or what entity he had designated as the beneficiary of the fundraising, and to whose bank account the funds could be released. (The campaign page invites donors to send checks to Kolfage himself, and says that "100% of your donations will go to the Trump Wall.") We did not receive any response to our questions.

The campaign page does stipulate that, "If we don’t reach our goal or come significantly close we will refund every single penny. We are working on a time frame to achieve." However, the campaign does not have a termination date or explanation of what might count as "significantly close" to the $1 billion target.

GoFundMe does have a policy and mechanism whereby a donor can demand a refund in the event of "misuse" by the campaign manager or the intended beneficiary of the funds; but that policy is relatively narrowly defined and might not protect donors in all circumstances.

Tynan, Dan.  "Facebook Accused of Censorship After Hundreds of US Political Pages Purged."   The Guardian.  17 October 2018.