Internet users enthusiastically shared stirring scenes from a May 2021 protest against the detention of two Indian immigrants living in Scotland. 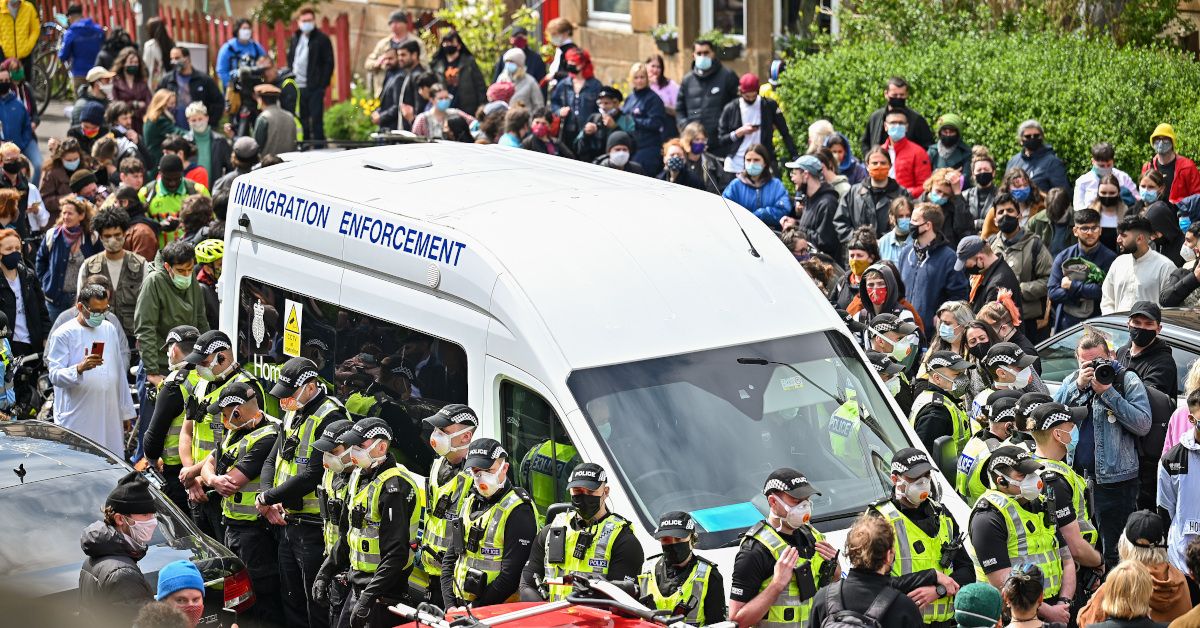 Claim:
In May 2021, protesters in Glasgow, Scotland, forced the release of two Indian men detained by Immigration Enforcement officers.
Rating:

In May 2021, internet users enthusiastically shared photographs and videos that they presented as showing the successful outcome of a public protest against the arrest and detention of two Indian men in Glasgow, Scotland, by U.K. Immigration Enforcement officers.

For example, on May 13, a popular post on the Reddit forum contained a short video of a large crowd cheering and applauding as two men stood in the back of a van waving to the protesters. The caption read: "Neighbors in Glasgow surrounded a van that was attempting to arrest a family of immigrants in their neighborhood. A proud day in Scotland!" It's not clear whether the two men in question were family relatives, but otherwise the post accurately described what the video showed, and we are issuing a rating of "True" as to the core claim that the protesters had effectively forced the release of the two men.

On the morning of May 13, U.K. Immigration Enforcement officers (roughly equivalent to the U.S. Immigration and Customs Enforcement agency, ICE) detained two Indian men — Lakhvir Singh and Sumit Sehdevi — at a residence in the Pollokshields neighborhood of Glasgow's South Side. According to one neighbor, the incident began at around 9 a.m. local time.

According to multiple eyewitness accounts, videos, and photographs, hundreds of people, many of them local residents, surrounded an Immigration Enforcement (IE) van containing Singh and Sehdevi and prevented it from leaving Kenmure St. Some protesters chanted, "These are our neighbors, let them go," and one man laid underneath the van in order to force IE officers not to leave. After what ITV News said was eight hours of protest, the men were released.

In a statement, Police Scotland said:

In order to protect the safety, public health and well-being of all people involved in the detention and subsequent protest in Kenmure Street, Pollokshields, today, Chief Superintendent Mark Sutherland has, following a suitable risk assessment, taken the operational decision to release the men detained by UK Immigration Enforcement back into their community meantime...

Eileen Reid captured the moment when the doors of the IE van were finally opened, posting the 20-second video that was later shared in the Reddit post highlighted above:

David Millar, who lives on Kenmure St., posted a video of the same moment from a different angle, showing the scale of the crowd of protesters:

Although Singh and Sehdevi are not understood to be Muslims themselves, the decision to carry out the IE raid on Eid al-Fitr, the culmination of Ramadan, has been criticized as insensitive and provocative. Pollokshields is regarded as a relatively close-knit neighborhood with an ethnically diverse population and significant Muslim community. It is located within Glasgow Southside — the Scottish Parliament constituency of Scottish First Minister and Scottish National Party Leader Nicola Sturgeon.

In response to the incident, Sturgeon wrote on Twitter:

"I disagree fundamentally with [U.K. Home Office] immigration policy but even putting that aside, this action was unacceptable. To act in this way, in the heart of a Muslim community as they celebrated Eid, and in an area experiencing a Covid outbreak was a health & safety risk..."

Although Scotland has a devolved parliament and government, which Sturgeon leads, certain powers and policy areas, including immigration, are retained by the U.K. government in London. Immigration enforcement, in particular, is overseen by the Home Office, which is roughly the equivalent of the U.S. Justice Department.

It's not clear what Singh and Sehdevi's immigration status is. The Home Office told Snopes that the two men had been detained on suspicion of unspecified immigration offenses, were compliant with IE officers, and had been released on bail pending further investigation, indicating that, despite their release on May 13, they might face arrest and detention again at a later date.

Snopes asked both the Home Office and Police Scotland to clarify which agency actually had custody of Singh and Sehdevi and how their release was carried out. The Police Scotland statement posted to Twitter on May 13 suggested that agency made the decision to release the men, but they had been detained by IE officers in the first place. We did not receive a response to that question from either.