A Twitter advertisement highlighted a "movie mistake" that appeared to show an airplane's flying over actor Russell Crowe and the set of the 2000 film "Gladiator." 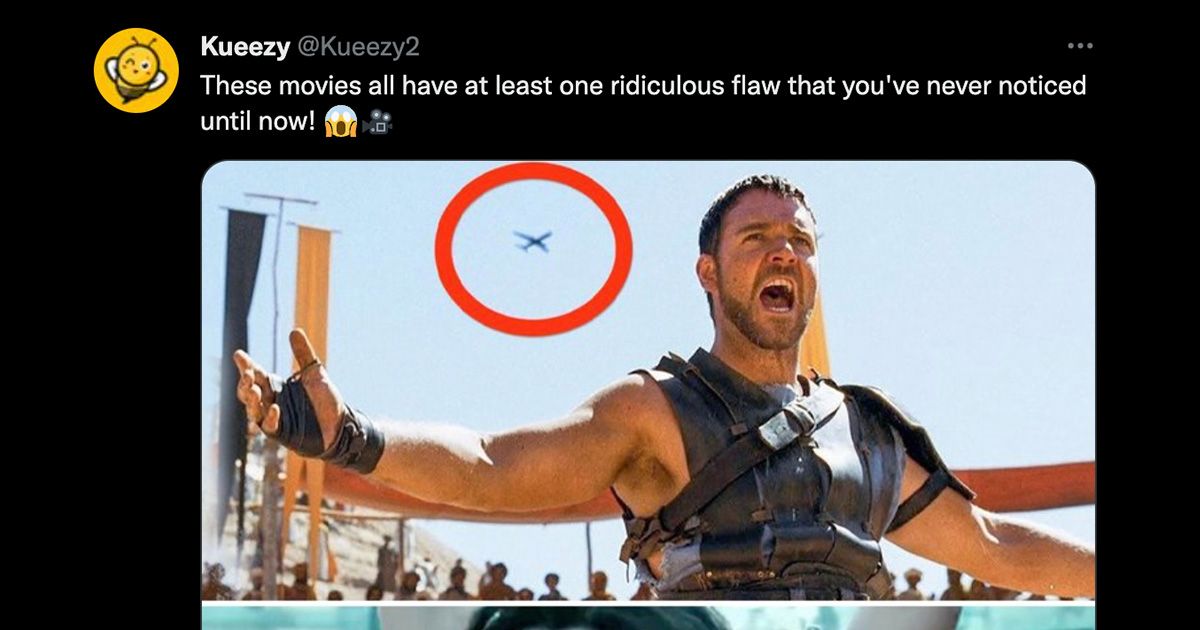 According to a rumor an airplane or plane is visible by mistake in the movie Gladiator. (Image Via Twitter)

Claim:
An airplane is visible in a scene in the movie "Gladiator," which was set in ancient Rome.
Rating:

On April 22, 2022, a misleading online advertisement on Twitter claimed to show a "movie mistake" in which an airplane can be seen flying over actor Russell Crowe and the set of the 2000 film "Gladiator," which was set in ancient Rome. The moment came during one of the more famous scenes from the movie in which Crowe's character, Maximus, yells at the crowd, "Are you not entertained?" However, the truth is that there was no airplane in the film. In reality, the ad led to a seemingly endless slideshow article with dozens of pages. It began like this:

Movies have the power to transport you into another world, but humans make movies, and that's why there can be imperfections within them. In this list, you will find out how even the most hardworking and talented directors and actors made mistakes in their movies. Grab your popcorn and read on to find out which films made BIG mistakes that no one saw - until now!

Nowhere in the lengthy story did it address anything about an airplane being visible in "Gladiator." Also shown in the ad was a screenshot of actor Gal Gadot in the film "Wonder Woman." The article itself mentioned nothing about Gadot or the 2017 movie. It was all nothing more than misleading clickbait.

The 1:26 mark in this YouTube video shows the same moment in the movie that was shown in the ad, confirming that there was no airplane flying across the sky in "Gladiator":

The fake "movie mistake" was reported on by the WhatCulture YouTube channel in 2021, calling it a "frequently accepted myth" that all began with a YouTube video thumbnail. (Its true origins years ago may have been in a contest where users created fake movie mistakes with Adobe Photoshop or other similar editing software.)

As we've mentioned many times before, online ads that lead to slideshow articles are often little more than misleading clickbait. They can sometimes go on for hundreds of pages and often don't even address the tease made in the ad. We explain below what the strategy was behind the "Gladiator" airplane ad and hope we saved our readers the effort of clicking these kinds of multi-page slideshow articles.