There's a difference between having your law license suspended and being disbarred. While Giuliani's law license was suspended on June 24, 2021, he has not been officially disbarred.

On June 24, 2021, the New York State appellate court suspended the law license of Rudy Giuliani, the former mayor of New York and former President Donald Trump’s lawyer, saying that he “communicated demonstrably false and misleading statement to courts, lawmakers and the public at large in his capacity as lawyer for former President Donald J. Trump and the Trump campaign in connection with Trump’s failed effort at reelection in 2020.”

As this news circulated on social media, some pointed out that Giuliani’s license was suspended exactly 35 years after another famous lawyer, Roy Cohn, was disbarred:

This claim misses on a few accounts. Most importantly, Giuliani had his law license suspended on June 24, 2021, but he has not been disbarred. The New York Times writes:

Rudolph W. Giuliani, a former top federal prosecutor, New York City mayor and lawyer to a president, faces the possibility of disbarment after a New York court ruled on Thursday that he made “demonstrably false and misleading statements” while fighting the results of the 2020 election on behalf of Donald J. Trump.

The New York State appellate court temporarily suspended Mr. Giuliani’s law license on the recommendation of a disciplinary committee after finding he had sought to mislead judges, lawmakers and the public as he helped shepherd Mr. Trump’s legal challenge to the election results. For months, Mr. Giuliani, who served as Mr. Trump’s personal lawyer, had argued without merit that the vote had been rife with fraud and that voting machines had been rigged.

In the 1970s, Cohn represented Trump after the U.S. Justice Department accused him of racial discrimination and violating the Fair Housing Act. The matter was eventually settled out of court.

On June 23, 1986, Cohn was disbarred. The Appellate Division of the state Supreme Court wrote: “Simply stated, the four charges involved alleged dishonesty, fraud, deceit and misrepresentation … After a thorough review of the record, we have come to the conclusion that all four charges should be sustained and that respondent should be disbarred.” 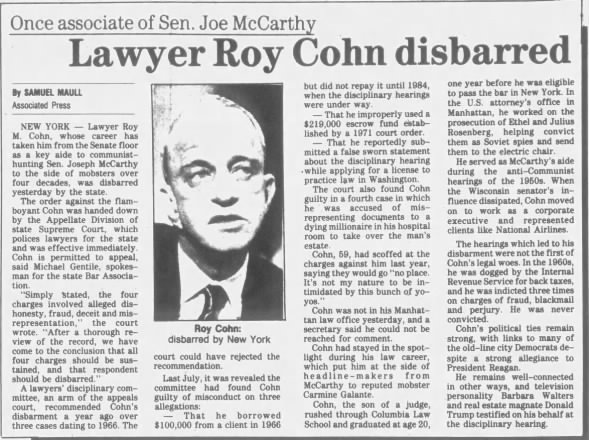