Did the Girl Scouts Congratulate Amy Coney Barrett on Twitter?

The organization made headlines for more than just their cookie sales. 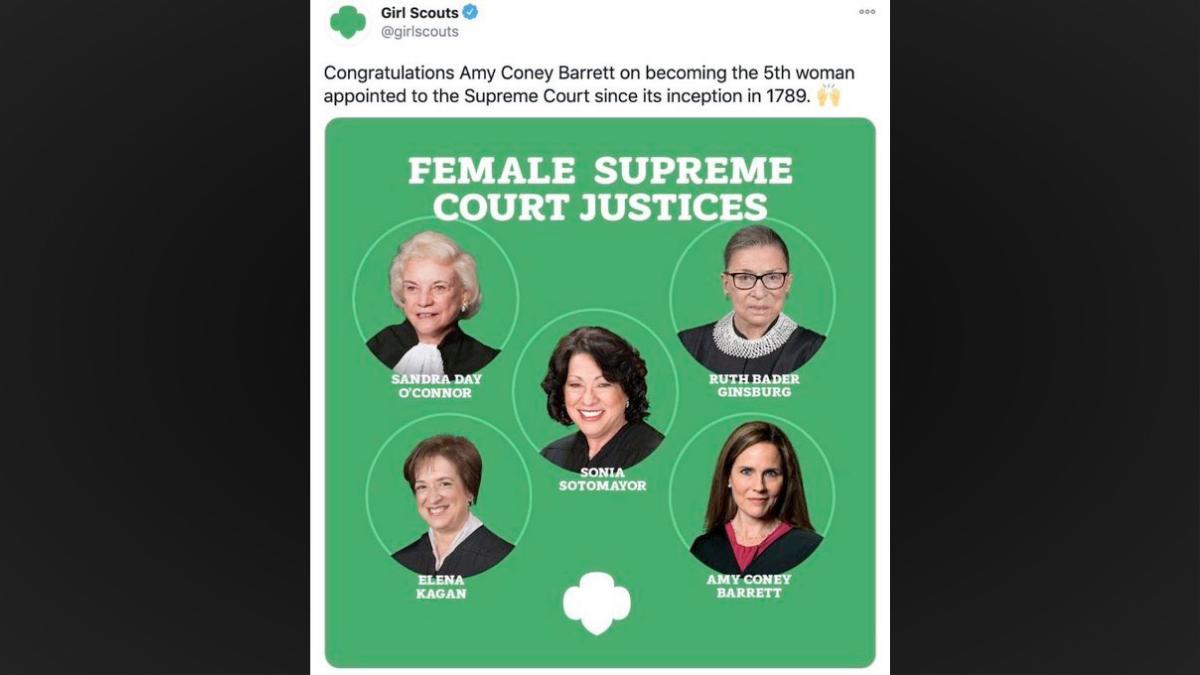 Claim:
A now-deleted tweet was shared by the Girl Scouts of the United States of America on Oct. 28, 2020, congratulating Barrett on “becoming the fifth woman appointed to the Supreme Court since its inception in 1789.”
Rating:

While it is true that the Girl Scouts of the U.S.A. congratulated Barrett for her Supreme Court confirmation on Twitter, the organization also highlighted the other four female justices who have served on the U.S. Supreme Court.

It is inaccurate to say that the tweet was specific to Barret’s confirmation.

In the days leading up to and following the Oct. 26, 2020, confirmation of Judge Amy Coney Barrett to the U.S. Supreme Court, a flurry of social media posts and news publications sparked controversy over whether President Donald Trump’s nomination was the right choice for the job.

Among the controversies was the claim that the Girl Scouts of the United States of America shared a tweet congratulating Barrett on her confirmation and "becoming the fifth woman appointed to the Supreme Court since its inception in 1789." While our analysis determined this claim to be true, it is important to provide further context about the now-deleted post. A portrait of Barrett was shared in an image that also contained four other female justices who have served on the Supreme Court, including Sandra Day O’Connor, Sonia Sotomayor, Elena Kagan, and the late Ruth Bader Ginsburg, whom Barrett replaced.

A reverse-image search of the tweet in question returned 18 results with the earliest having been published on Oct. 28, which was reportedly the first.

The original post drew backlash from many of those who oppose Barrett’s nomination and subsequent confirmation. The Girl Scouts deleted the initial tweet and issued an apology in which the group described itself as a “nonpolitical, nonpartisan organization” whose mission is to “lift up girls and women.”

But the tweet’s deletion also received pushback from groups like the Independent Women’s Forum, a conservative economic nonprofit, that claimed previous tweets acknowledging politicians and lawmakers like Hillary Clinton hadn’t been deleted.

Opposition to Barrett’s confirmation came as swiftly as her nomination did eight days after the death of Ginsburg, who was largely thought of as a liberal icon and pioneer for women’s reproductive rights, and whose dying wish was to not have Trump choose her replacement. Opponents argue that her nomination and confirmation came at a divisive point in American politics and was too close to a presidential election. Supreme Court justices are nominated by a sitting president and hold a lifelong term, which means that their interpretation of the law may be influenced by their political affiliations and supporters far beyond their nominator’s term. Barrett’s affiliation with the charismatic Christian community People of Praise has prompted many to argue that she may not serve as an impartial judge in court decisions surrounding abortion, healthcare, and LGBTQ issues.

Supporters of Barrett have called her a “model of the fair, impartial and sympathetic judge,” while the American Bar Association deemed Barrett as “well-qualified” to serve on the Supreme Court. During her nomination acceptance speech on Sept. 26, Barrett acknowledged the parallels between her application of law and that of the late conservative Justice Antonin Scalia, whom she clerked for in 1998, but argued in her confirmation acceptance speech a month later that her religious and political ties will not influence her court decisions.

Correction [Nov. 2, 2020]: A previous version of this article erroneously stated that Barrett spent two decades clerking for Justice Scalia. She spent one year doing so.