Did Authorities Show Up after a Girl Found a 700-Year-Old Coin?

The coin discovery was made in the United Kingdom. 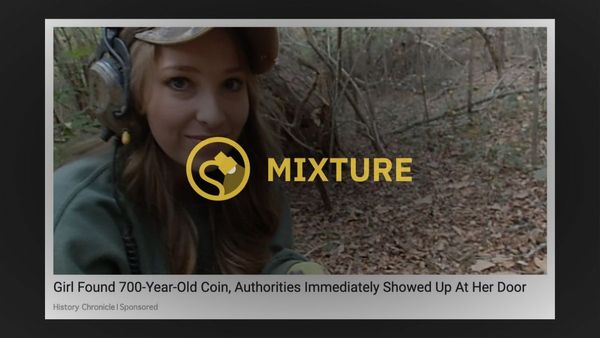 Claim:
U.K. authorities showed up at a girl’s door right after she found a rare 700-year-old coin.
Rating:

A woman found a 14th century silver coin buried in the ground in her family home when she was a child. She kept it as a memento and showed it to museum experts more than a decade later in 2009.

Authorities did not show up at her house immediately after the discovery, as she kept the coin for years.

Finding buried treasure was more trouble than it was worth for one woman from Shropshire in the United Kingdom, who held on to a valuable and rare coin she found buried in the ground at her family home for more than a decade before sharing it with museum experts in 2009.

Versions of her story were circulating on the internet as recently as 2019, with one purported picture of the woman claiming that authorities immediately showed up at her door after she found the coin. We learned that while she did indeed find a valuable coin as a young girl, she kept it for more than a decade before any authorities learned of its existence. The above photograph also does not show the actual girl from the story, whose real photograph was featured in this Express U.K. article.

Kate Harding was only 9 years old when she found the silver coin in her childhood home. In 2009, when she was in her early 20s, she showed the artifact to museum experts, who identified it as a 14th-century silver coin and told her she had to report the find to a coroner, who is an independent judicial officer.

She didn't do so, and in February 2010, she was investigated for breaching the Treasure Act, which is a 1996 law that obliges finders of such objects to report the find to their local coroner, who determines whether the item is truly a treasure.

She became the first in the U.K. convicted of failing to report a treasure, according to local police. She was taken to court after claiming in a police interview that she had lost the artifact. In February 2010, she was given a three month conditional discharge, ordered to hand over the artifact, and pay £25 (the U.S. equivalent of around $33). But her lawyers appealed the case, saying that the coin was in her possession before the Treasure Act came into force. The Crown Prosecution Service subsequently dropped the case, and she handed the object over to a local coroner, who would complete a full inquest to determine the full value and ownership of the coin.

The coin was said to be worth around £2,000 (the U.S. equivalent of around $2,600). Also called a piedfort — a coin struck on an unusually thick metal disc that is believed to originate from France — it reportedly marked Charles IV’s ascension to the French throne in 1322. According to the  regional newspaper, Shropshire Star, the piedfort was not officially classified as a coin during the inquest, as it was thought to have been used for ceremonial purposes and not as a means of payment.

Given that the woman did indeed find a rare item but managed to keep it for years before authorities confronted her about it, we rate this claim a “Mixture.”