A comparison of two different photographs that appear to have nothing in common. 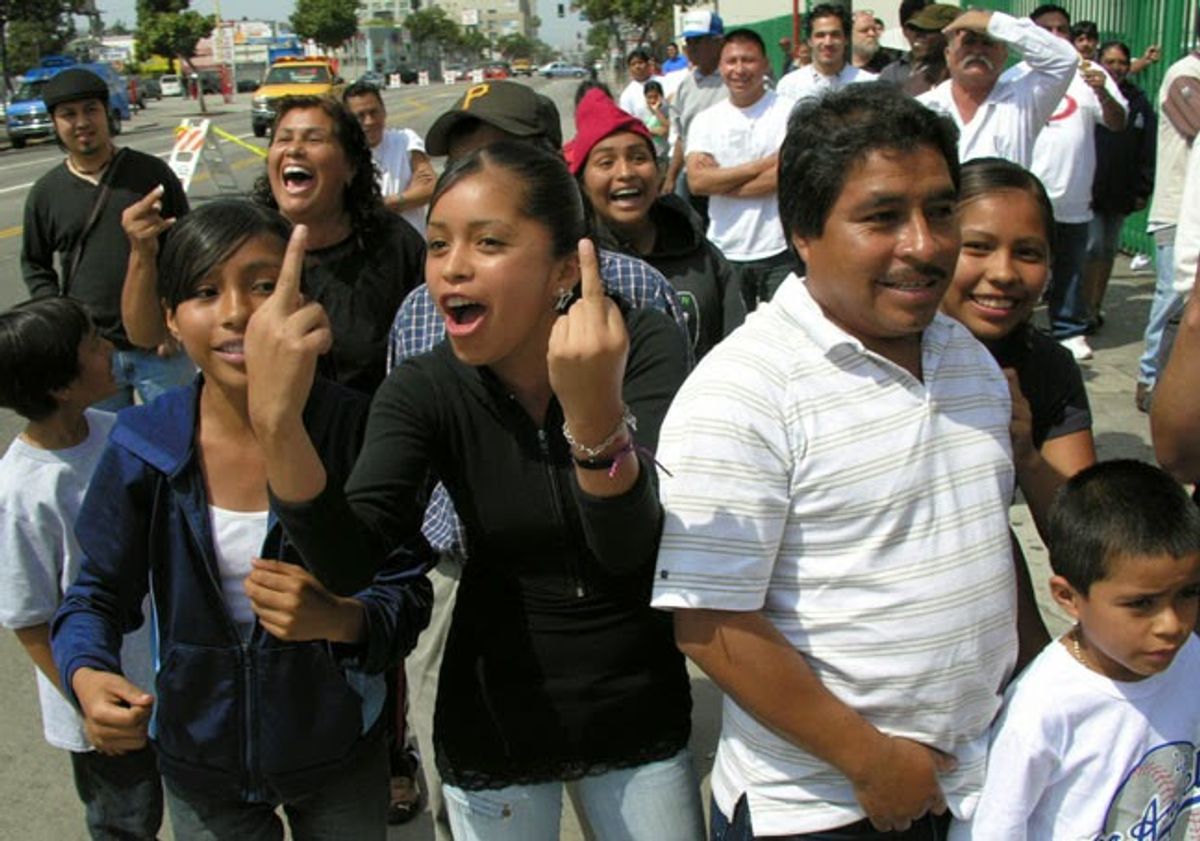 Claim:
A meme contrasts the attitudes of two different sets immigrants to the U.S.
Rating:

An image purportedly showing a group of passengers disembarking from a train while flipping the bird is frequently shared on social media along with disparaging comments about immigrants. When it was posed to the Facebook page "Deplorable Nation" in November 2018, for example, the pictured individuals were labeled "Gimmegrants": But that image is not only typically presented out of context, it's also outdated and digitally manipulated as well.

The original photograph was taken in March 2007 during a demonstration held outside Los Angeles City Hall by an anti-immigration group called the Minutemen and it was included in a gallery of images from La.IndyMedia.org: Nothing about the photograph suggests that the pictured people are immigrants (illegal or otherwise) other than that they appear to be of Mexican descent, and the picture captures those persons flipping off the demonstrators (not America itself), yet sites such as ConservativeHQ.com have captioned the image as showing "illegals flipping off America."

Eventually someone digitally inserted a "train" adorned with President Obama's campaign symbol into the background (as seen above), fostering the false impression that the pictured persons were disdainful immigrants newly arrived in the United States.

The other photograph included in this meme does depict a group of immigrants arriving in the United States, a picture that, according to the Library of Congress, was taken in 1907 at Ellis Island: This "Gimmegrants" image is often shared to bolster the mistaken impression that immigrants who enter the United States receive a wide range of government benefits. We've previously covered a number of rumors on this topic, showing that undocumented immigrants are not eligible for many of the benefits afforded to legal residents and citizens of the United States.

It's true that immigrants who legally entered the United States through Ellis Island in the late 19th and early 20th century did not receive financial assistance from the federal government in the form of welfare payments or other government benefits (e.g., food stamps, housing assistance, Medicaid), for the simple reason that such programs did not exist at that time. Many of the people who emigrated to the United States from Eastern and Southern Europe in the early 1900s did face considerable hostility and discriminatory laws:

In the early 20th century, nativists protested the mass immigration of the "new immigrants" from Eastern and Southern Europe, such as from Russia, Poland, Italy and Greece. Nativists viewed these immigrants as too Jewish and too Catholic. These immigrants were not even considered "whites" at least through the first generation. This opposition led to infamous laws in the early 1920s that significantly curtailed immigration from these parts of Europe by placing strict and limited quotas from these areas.

Discriminatory immigration policies aimed at southern and eastern Europeans figured into the quota-based policies of the 1920s. With the passage of the Immigration Act of 1924, also known as the National Origins Act or Johnson-Reed Act, the U.S. used restrictive immigration policies in the 1920s based on the 1890 proportions of foreign-born European nationalities. Since the 1890 census reflected higher numbers of northern Europeans, immigrants from those countries had greater opportunities to emigrate. The arguments, outlined in Madison Grant's 1916 book The Passing of a Great Race, held that older immigrants were skilled, thrifty, hardworking like native born Americans and recent immigrants from southern and eastern Europe were unskilled, ignorant, predominantly Catholic or Jewish and not easily assimilated into American culture.