Was a Giant Squid Found Beached in New Zealand?

A video purporting to show a 50-foot-long squid beached in Punakaiki, New Zealand, was a hoax. 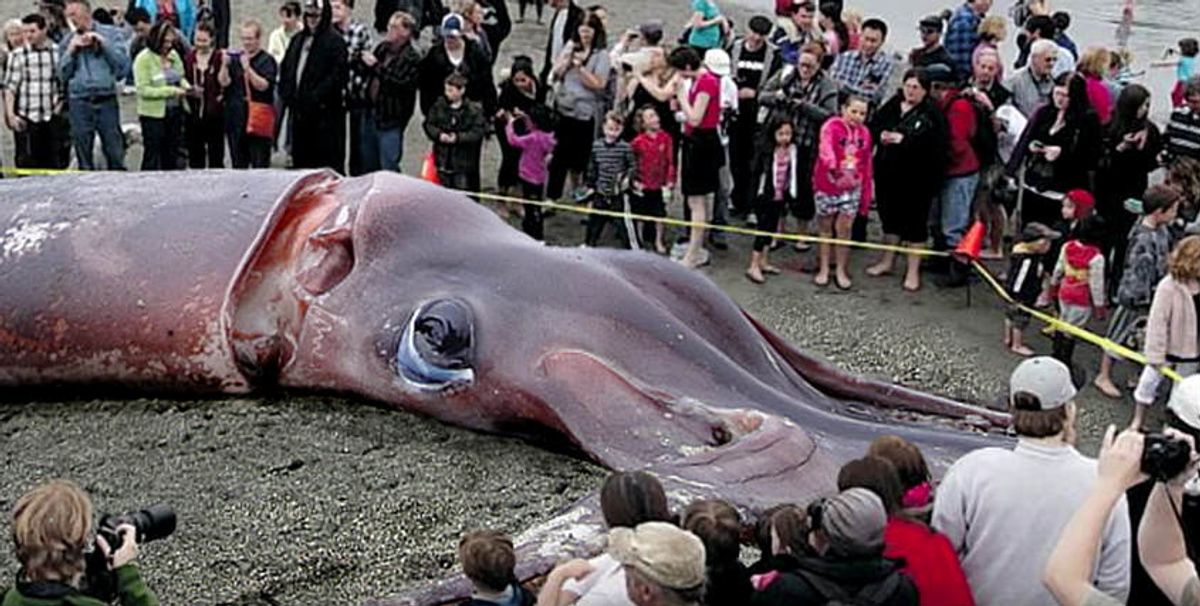 Claim:
A video shows a 50-foot-long giant squid that washed up on a beach in New Zealand in 2015.
Rating:

A video purportedly showing a 50-foot-long giant squid that washed up on a beach has been around for years, but made a big splash once again on social media in November 2016:


According to the accompanying description, the squid washed up on a beach in Punakaiki, New Zealand on 1 March 2015. However, the image featured in the video is fake, and the scene was not filmed anywhere near New Zealand, but more than 7,000 miles (almost 12,000 kilometers) away.

The original image was taken in June 2012, and showed a crowd of people gathered around a humpback whale (not a squid) that had washed ashore in White Rock, British Columbia, Canada: Armed with buckets for water and shovels for digging, the residents of White Rock streamed down to the beach early Tuesday in an attempt to help a humpback whale that had washed up on shore.

But just hours after being beached on the waterfront about 45 minutes south of Vancouver, the whale died as dozens of people looked on helplessly.

“The animal was alive but it was in just too weak and in such poor shape that we knew it had been distressed for a long time,” said Paul Cottrell, the marine mammal co-ordinator for the Department of Fisheries and Ocean.

“It had been labouring for a long time and was swimming and just got caught by the tides.”

The photograph of the "giant squid" was created by cropping the original image and replacing the whale with a photograph of a squid. Here's a comparison of the two images: This is not the first time that a photograph of a beached whale has been used as a digital media backdrop for giant squid hoaxes. In January 2014, an image of whale was doctored and shared with a similar claim. However, neither story was true.