Do Photos and Video Show a Giant Jellyfish?

The barrel jellyfish is considered relatively small compared to some other species of jellyfish. 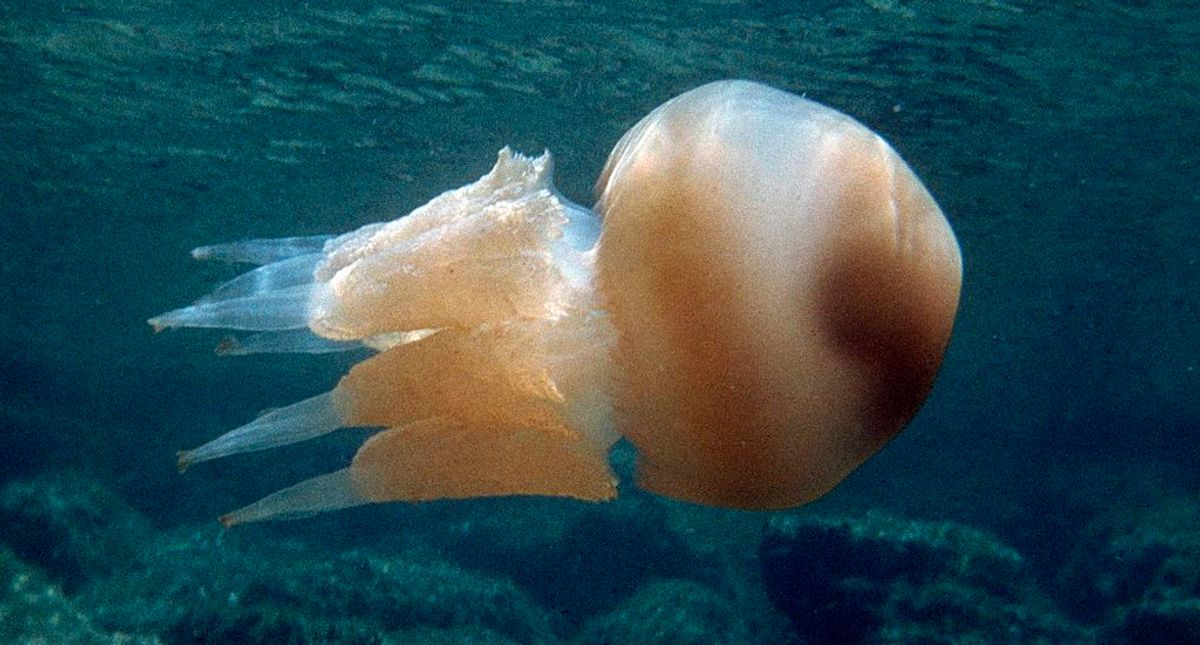 Whenever we're asked to examine a photograph or video of an animal that has been going viral on the internet, we often find some aspect of the creature has been exaggerated. Perhaps the animal appears larger than it is due to the use of forced perspective. Perhaps the picture has been digitally altered. Or perhaps the animal isn't an animal at all but a movie prop. So when we started receiving queries about a "Giant jellyfish the size of a human," we had a hunch some aspect of the footage would be amiss:

Woah!!!!! We went diving in Falmouth yesterday to finish off #WildOceanWeek and came across this GIANT barrel jellyfish! ? What a way to finish off this marine wildlife adventure! ? pic.twitter.com/NNwDelfWyV

Turns out this is a genuine photograph of a very large barrel jellyfish (Rhizostoma pulmo).

This picture was posted by Lizzie Daly, a wildlife biologist, who was filming a series of underwater adventures for the "Wild Ocean Week" fundraising project. The above-displayed photograph was snapped by her diving partner, Dan Abbott, off the coast of England near the town of Falmouth in July 2019.

Abbott posted several other photographs of this jellyfish to his Instagram page:

The jellyfish that travelled around the world. It’s been hard to put into words what the last few days has felt like, but ultimately I am so excited and proud that we got the world talking about the marine life in the UK. There’s something special about seeing amazing wildlife on your doorstep, and hopefully this has inspired others to get out there and see it for themselves! Thank you @dalylizzie, your passion & hard work is incredible ? Go get in the ocean, you never know what could turn up! #wildlife #jellyfish #nature #ocean #uk #underwaterphotography #cameraman #cinematographer #epic

In a video of the encounter posted to her Facebook page, Daly explains: "We just swam with a giant barrel jellyfish. I've never seen a jellyfish that big. It was the size of my body. That was the best thing I've ever done."

Daly elaborated on the encounter in an article published by the Guardian:

“I’ve never seen one that big,” said Lizzie Daly, a biologist who saw the creature near Falmouth. "We had seen a few smaller jellyfish at a beautiful reef nearby, and then out of the murk came this huge, beautiful jelly fish. You just take a double look and ask yourself if it’s actually a metre and a half long."

The pair said they were not surprised by the animal’s behaviour. “It has got a very mild sting and poses no threat to humans – some people don’t even feel it,” Daly said. “Many people would be immediately worried, but it is not dangerous. Its a majestic creature.”

Daly estimated that the jellyfish was about 1.5 meters in length (about 5 feet). While this is certainly a large barrel jellyfish, it's not even close in size to the largest jellyfish in the ocean, the lion's mane jellyfish (Cyanea capillata), or "Giant jellyfish," whose total body length can exceed 120 feet long.

To learn more about Daly's project, or Wild Ocean Week, you can check out her page here:

To celebrate our oceans Lizzie is embarking on an ambitious circumnavigation of the UK to document and share her encounters with some of the UK’s most charismatic marine species! Lizzie is proud to be an ambassador for the Marine Conservation Society and will be raising money for the conservation work of MCSUK.

Lizzie “I get really excited at the thought of boasting about our wonderfully wild coasts and so this July I am embarking on my very own marine adventure #WildOceanWeek. I want to bring the audience on the journey with me so I will be uploading videos and updates live as it happens throughout the week. Diving with seals, swimming with blue sharks and generally celebrating our coasts #WildOceanWeek is about showcasing how you can immerse yourself with diverse wildlife right on your doorstep and most importantly, supporting those on the forefront of conserving our marine environments.”