Did Germany Start a Campaign to Feed Americans?

Many Americans are truly food insecure, but the "Great Nations Eat" campaign ads are American made. 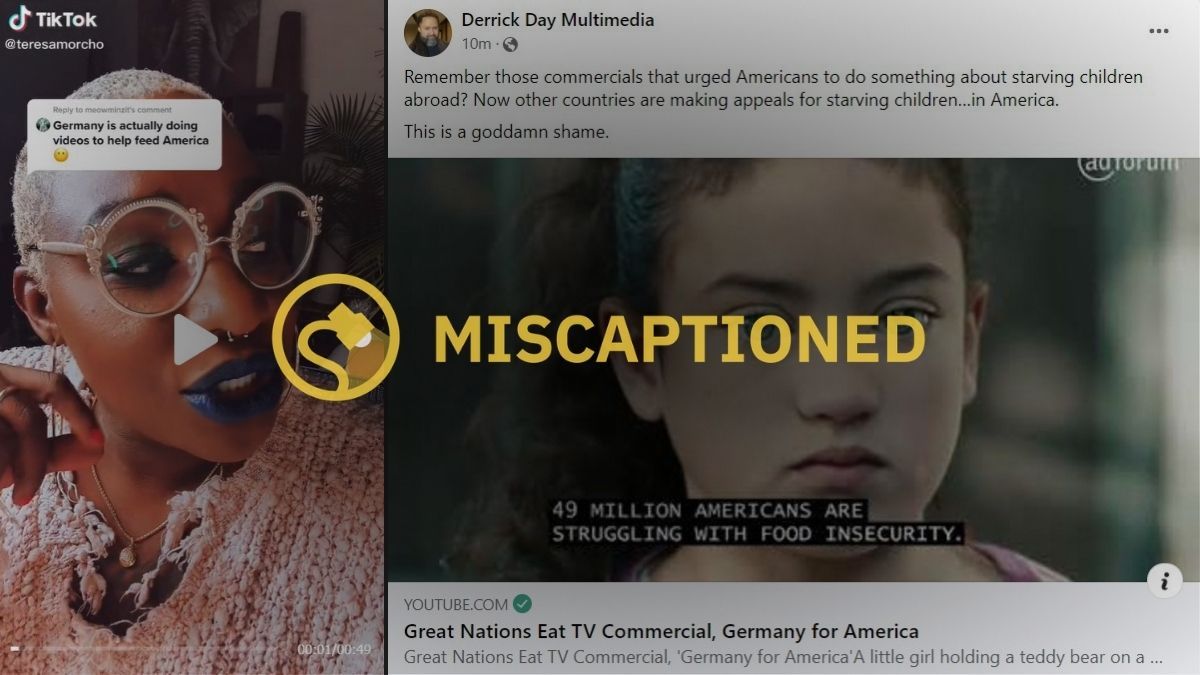 In the fall of 2021, a series of videos started circulating on social media that supposedly showed a  charitable campaign from Germany encouraging donations to feed hungry Americans. One posting of this claim on TikTok racked up more than 9 million views: While many social media users claimed that this "Great Nations Eat" campaign had been produced in Germany (some claimed China) in an effort to raise funds to feed hungry Americans, this video actually originated in the United States. This video comes from a 2015 campaign produced by the American charity Share Our Strength.

The "Great Nations Eat" campaign was created by Share Our Strength and the creative agency BBG (Bartle Bogle Hegarty). In a news release, the group writes that it purposefully mirrored the public service announcements (PSAs) that often air in the United States to raise money to feed people in developing countries in an attempt to evoke an emotional reaction from American audiences.

Billy Shore, CEO and founder of Share Our Strength, told Fast Company in 2015:

“This was really to try to think a little more disruptively to get people’s attention, to go right to the heart of the issue that people are not aware hunger is a problem in the United States ... I’d say that historically there’s been a genre of media around hunger that looks kind of alike–stories of kids in rural areas like Appalachia or Alabama ... Those stories are important and compelling, but they all have the same kind of message. The idea was to do something different, and point out that America can’t be great on an empty stomach–really tap into this notion that it has to do with our strength as a nation, as a people, as a society. It’s not just about these children–as important as that is–but it really impacts all of us.”

The non-profit wrote in a news release at the time of the campaign's debut:

All of the advertising for the Great Nations Eat launch was created by the award-winning creative agency, BBH (Bartle Bogle Hegarty) New York. As the goal of the campaign was first and foremost awareness, the creative allows for the facts to evoke the emotion. The campaign PSAs use an unconventional approach to contrast the problem of hunger in America versus other countries, surprising viewers with the facts.

While these ads were not actually produced in China, Germany, or Slovenia, the message in these ads — that millions of people in the United States are food insecure — is true. According to the U.S. Department of Agriculture (USDA), more than 10% of U.S. households (which amounts to about 38.3 million people) were food insecure in 2020.

Food insecure — At times during the year, these households were uncertain of having, or unable to acquire, enough food to meet the needs of all their members because they had insufficient money or other resources for food. Food-insecure households include those with low food security and very low food security.

Here is one of the American-produced "Great Nations Eat" ads that is presented as if China made this ad to feed hungry Americans:

Here's another version of this ad "from Germany":

Millions of Americans truly struggle with hunger. While these ads were created to make it seem as if China, Germany, and other countries had released PSAs to feed hungry Americans, these videos were actually produced by an American charity and were designed to play on the tropes of similar PSAs.

Ha, Thu-Huong. “Video: What If Other Countries Saw the Same PSAs about Hungry Americans That Americans See about Them?” Quartz, https://qz.com/473786/video-what-if-other-countries-saw-the-same-psas-about-hungry-americans-that-americans-see-about-them/. Accessed 10 Nov. 2021.