Does Georgia Have 'No Way to Verify' 2020 Presidential Election Results?

A full year after the 2020 election, bogus claims of widespread fraud persisted. 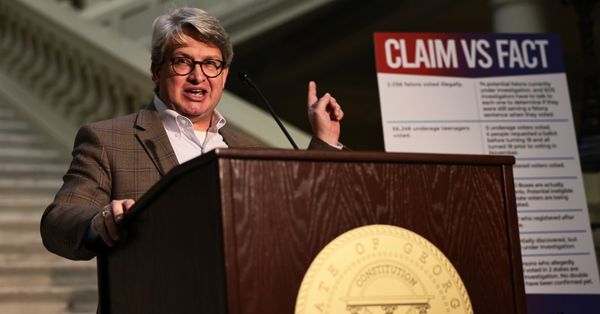 Claim:
Georgia has "no way to verify" its 2020 presidential election results because Fulton County doesn't have digital images of ballots.
Rating:

Georgia was a pivotal swing state in the November 2020 election, and as such became a target of former U.S. President Donald Trump's aggressive election disinformation campaign that baselessly alleged that a massive-scale voter fraud conspiracy cost him reelection.

One year after the election, Trump's supporters were still trying fruitlessly to prove Georgia's election was plagued by widespread fraud.

"ALL in person ballot images in GA are missing. 17,690 mail in ballot images are missing. This is FRAUD. So, GA has no way to verify that the ballots are legitimate reflections of what went through the machines." Bobb's statement refers to digital scans of paper ballots created by voting systems.

This statement is false, according to Gabriel Sterling, chief operating officer for the Georgia Secretary of State's Office, who called it not just a lie, but a "truly dumb" lie in this sharply-worded tweet:

The statement in Bobb's tweet, that "ALL in person ballot images in GA are missing. 17,690 mail in ballot images are missing," is apparently sourced from a Nov. 9, 2021, news conference held by Garland Favorito, co-founder of the VoterGA, an activist group that has sought to overturn Georgia's 2020 presidential election result.

In an email to Snopes, Favorito stated that Fulton County informed VoterGA that it did not have digital images of in-person voter ballots in response to a public records request submitted by VoterGA.

Even if that's the case, claiming the missing ballot images equate to fraud is false framing, in that it invents a crisis where no crisis exists. The absence of scanned, digital images of ballots isn't an indication of fraud, nor does it mean there is "no way to verify" Georgia's election results.

As Sterling indicated in the tweet above, Georgia's 2020 election results were counted three times, including a hand recount of the original paper ballots. The hand recount affirmed that the original machine count had accurately showed that Georgia voters chose U.S. President Joe Biden over Trump. A machine recount requested by Trump again affirmed Biden's victory in Georgia.

A law that went into effect in March 2021, Georgia Senate Bill 202, will make digital images of ballots public record. Nevertheless it's the original paper ballots, not their digital images, that "will remain the source of official vote counts, and they’re kept in the government’s custody, only unsealed by a judge’s order," as the Atlanta Journal-Constitution noted,

VoterGA was dealt a major legal defeat in its quest to find evidence of voter fraud when a judge in October 2021 threw out its lawsuit seeking to inspect absentee ballots.