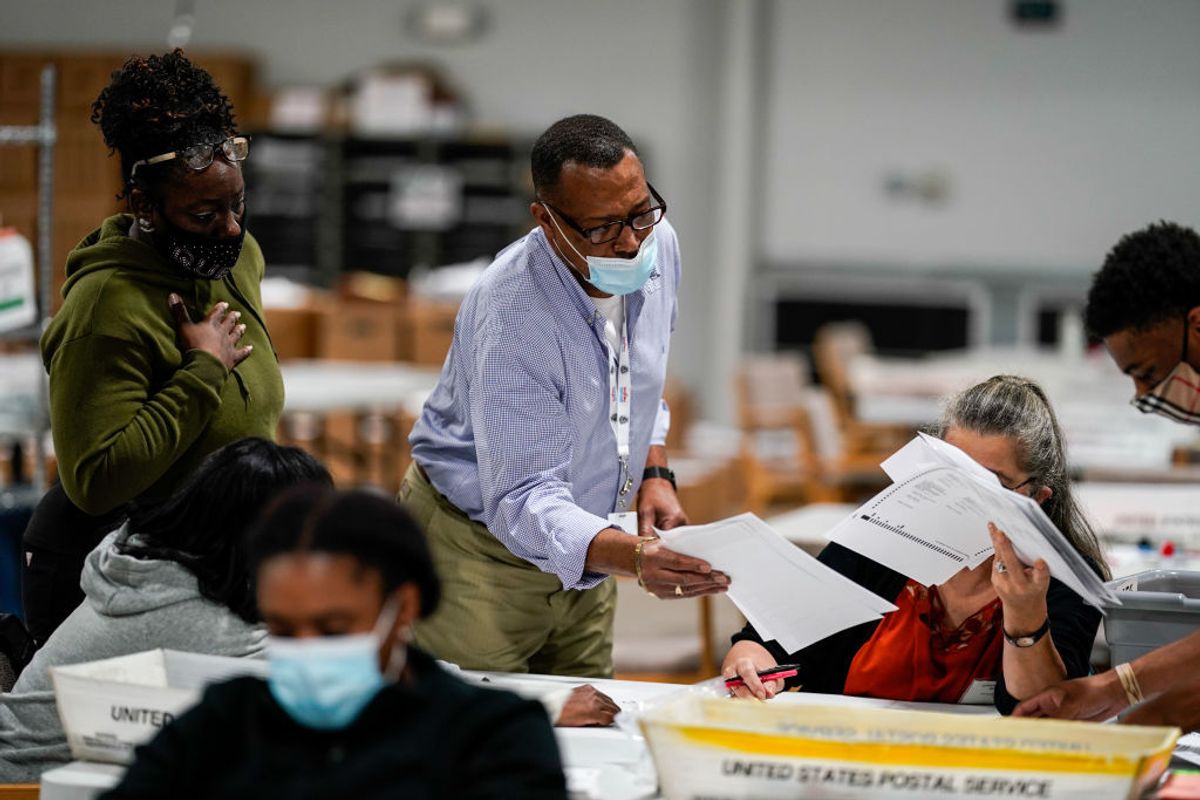 Claim:
A signature audit of absentee ballots in Georgia must be conducted and could overturn the 2020 presidential vote results in that state.
Rating:

One of the many claims U.S. President Donald Trump and his supporters made in flailing attempts to reverse Trump’s defeat by Democratic challenger Joe Biden in the 2020 general election was the assertion that Georgia officials were refusing to match the signatures on the envelopes of absentee (i.e., mail-in) ballots with the recorded signatures of the corresponding voters, because that process would produce evidence of widespread voter fraud in a state which Trump lost by less than 16,000 votes:

However, forcing Georgia to conduct a signature audit of absentee ballots, as Trump and other Republicans (such as Georgia Gov. Brian Kemp) have called for, is something exceedingly unlikely to occur, or to change the election outcome if it did, for a number of reasons.

First of all, absentee voters' signatures were already checked twice during the voting, once when they requested their absentee ballots and again after they submitted those ballots:

Under Georgia law, voters may request an absentee ballot via a paper or online application. If requesting a ballot by paper, the application must be signed. That signature is checked against the state’s voter database. If a ballot is requested online, a voter must provide their driver’s license or another ID number to confirm their identification.

Voters sign an outer envelope when returning an absentee ballot, and the signature is again checked against the state’s database. The database contains multiple versions of a person’s signatures. The signatures don’t need to be an exact match, but they must be consistent, the secretary of state’s office said.

When a signature is missing or not consistent, the voter must fill out a cure affidavit and provide a form of identification to prove their identity. If a voter doesn’t provide this information within three days of the election, the ballot is not counted.

Finally, even if a signature audit of absentee ballots identified some mismatched signatures that had been missed during the original process, nothing could be done to rectify those votes. Absentee ballots are separated from their envelopes during the tabulation process in order to protect secrecy and prevent votes from being traced back to the individuals who cast them, so it would not be possible to determine which candidates absentee ballots submitted in envelopes bearing mismatched signatures were cast for and negate those votes.

Both Republican and Democratic party representatives declined to exercise their right to observe the signature-matching process for absentee ballots in Georgia, and no state law requires that (or specifies how) a signature audit should be conducted:

“If a court orders it or if we have specific investigatory reasons, you do it,” he said of auditing the signatures. “If we make a precedent of ‘I don’t like the outcome. Therefore, we should start investigating random parts of the process’ ... it’s a bad precedent.”

Representatives of political parties — as well as any Georgia resident — have the right to observe the signature matching as part of the absentee ballot process. Sterling said neither party participated.