Were the Georgia Guidestones Stolen and Taken to New Hampshire?

A satirical web site reported that the granite monument disappeared — and then unexpectedly reappeared in another state. 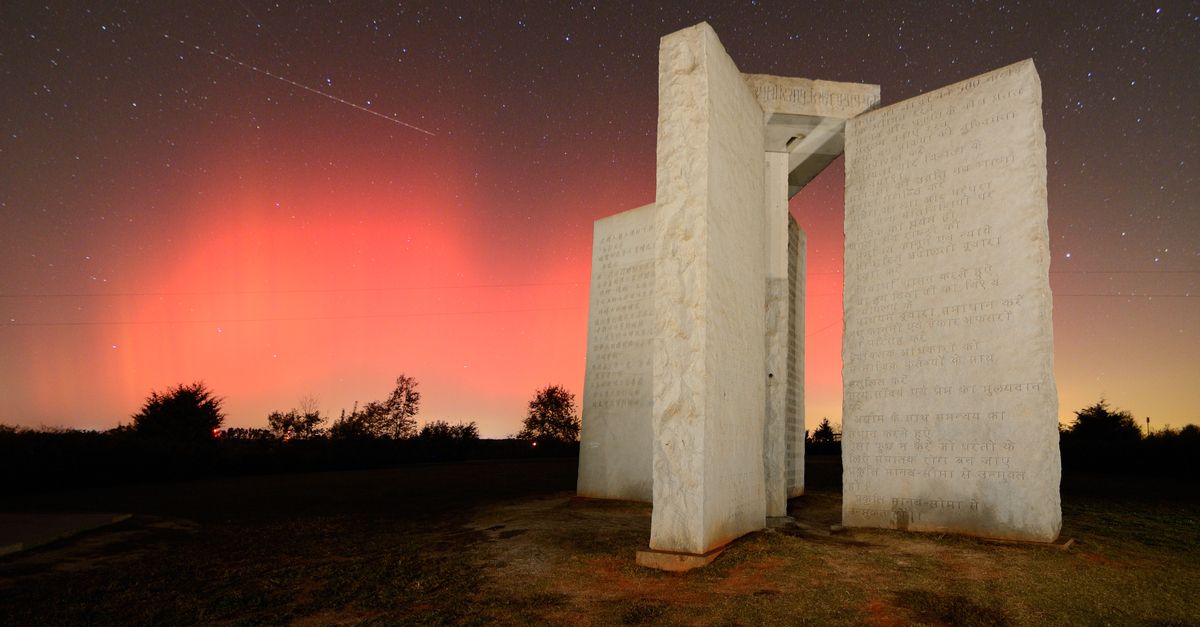 Claim:
The Georgia Guidestones were stolen from their site and then re-erected in New Hampshire.
Rating:

In July 2017, NCScooper.com published two stories about the Georgia Guidestones, a mysterious granite monument constructed in the 1980s by an artist under a pseudonym, and inscribed with ten guidelines that are meant to provide humanity with a blueprint for the means to exist on the earth. Whether it is meant to re-establish order after a global apocalypse or is simply something toward which its creators wish humanity to collectively strive is unclear:

Engraved in the stones are ten guidelines meant to re-establish the planet and society, perhaps after an apocalypse. They are written in eight different languages, English, Spanish, Swahili, Hindi, Hebrew, Arabic, Chinese and Russian, and among other commandments preach to:

- Rule passion – faith – tradition – and all things with tempered reason.

- Be not a cancer on the earth – Leave room for nature.

The guidestones also serve as an astronomical calendar, and every day at noon the sun shines through a narrow hole in the structure and illuminates the day’s date on an engraving. The names of four ancient languages are inscribed on the sides near the top: Babylonian cuneiform, Classical Greek, Sanskrit, and Egyptian Hieroglyphics. Additionally an instructional tablet at the site speaks of a time capsule buried underneath the surface, though the dates on which the capsule was buried and when it is to be re-opened are missing. Whether this is intentional or the capsule was never buried is unknown.

Naturally, the stones have been the focus of a whole string of conspiracy theories. These articles had little to do with the pre-existing conspiracy theories, however. The first reported that the giant granite slabs had been stolen, and the second article said that they reappeared in New Hampshire:

The Georgia Guidestones, which is a mysterious granite monument erected in the early 1980s that contains a set of 10 guidelines in eight modern languages, has been stolen according to Elbert County Sheriff officials. What baffles investigators is how anyone one could have moved the 200 ton slabs without anyone noticing.

“Someone or something came in late last night and took them,” said Elbert County Sheriff Shayne Heap speaking in an early morning press conference. “Those things are really heavy and it would take a large crew and heavy machinery to move them. We also have no motive in the crime, but there always has been a lot of mischief around the Stones.”

NCScooper.com is an entertainment web site that does not publish factual stories, and these stories are untrue and not meant to be taken seriously. The web site explains in its biting "manifesto" that its content is satirical in nature and intended to be read as such:

First off, what kind of dolt reads a manifesto? Answer we do and apparently so do you. So congrats.

The Georgia Guidestones is a real (and unusual) monument that was commissioned by an anonymous group in the 1980s, contains a set of instructions for rebuilding humanity after doomsday that is written in several different languages, and functions as a clock, a calendar, and a compass:

Approaching the edifice, it’s hard not to think immediately of England’s Stonehenge or possibly the ominous monolith from 2001: A Space Odyssey. Built in 1980, these pale gray rocks are quietly awaiting the end of the world as we know it. Called the Georgia Guidestones, the monument is a mystery—nobody knows exactly who commissioned it or why. The only clues to its origin are on a nearby plaque on the ground—which gives the dimensions and explains a series of intricate notches and holes that correspond to the movements of the sun and stars—and the “guides” themselves, directives carved into the rocks. These instructions appear in eight languages ranging from English to Swahili and reflect a peculiar New Age ideology. Some are vaguely eugenic (guide reproduction wisely—improving fitness and diversity); others prescribe standard-issue hippie mysticism (prize truth—beauty—love—seeking harmony with the infinite). What’s most widely agreed upon—based on the evidence available—is that the Guidestones are meant to instruct the dazed survivors of some impending apocalypse as they attempt to reconstitute civilization.

Although, as mentioned, these odd guidestones are often the subjects of conspiracy theories, the claims that they were stolen and then moved to New Hampshire originated from a satire page.