Did George the Dog Give His Life to Save 5 Kids from 2 Pit Bulls?

'Tis the story of a "tiny" dog's bravery years ago in Manaia, New Zealand. 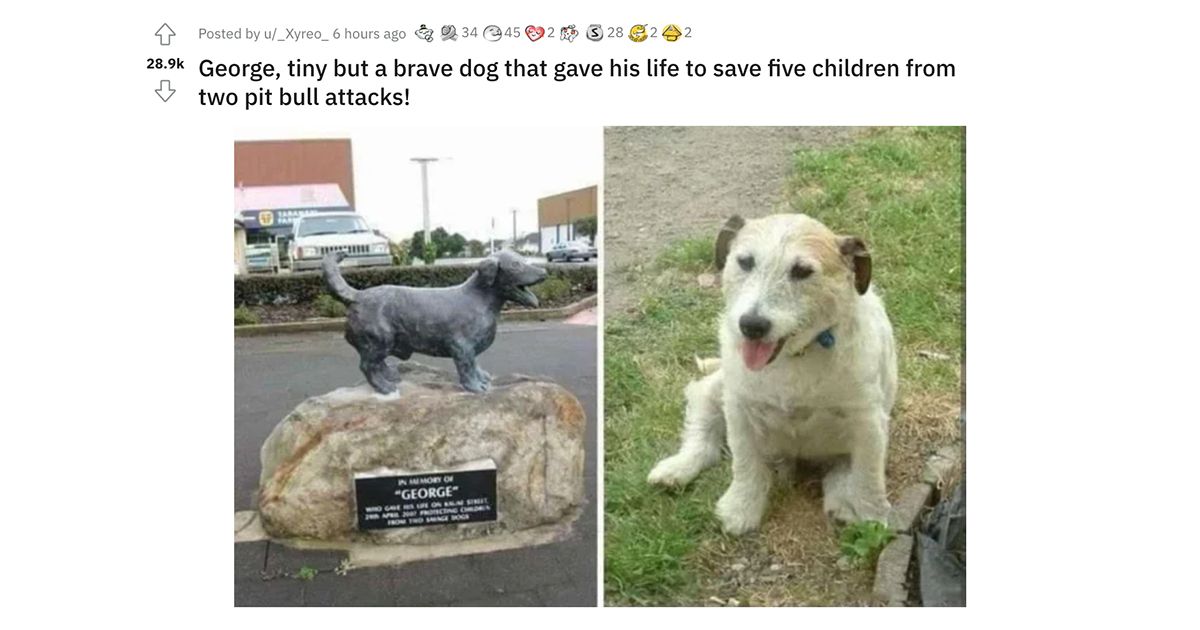 On Dec. 9, 2021, pictures and a story were shared to r/pics on Reddit titled: "George, tiny but a brave dog that gave his life to save five children from two pit bull attacks!"

A plaque on a statue in one of the pictures read: "In memory of 'George,' who gave his life on Kauae Street, 29th April 2007 protecting children from two savage dogs."

We've reported before on fake tales of bravery by dogs that didn't exist. However, George's story really happened.

On April 29, 2007, George, described as a "plucky" 9-year-old Jack Russell terrier, helped to hold off two pit bulls from attacking five children in Manaia, New Zealand. Unfortunately, he was "so severely mauled in the fight" that a decision was made for him to be put down, The Associated Press (AP) reported:

George was playing with the group of children as they returned home from buying sweets at a neighborhood shop in the small town of Manaia in New Zealand last Sunday when the two pit bulls appeared and lunged toward them, Allan Gay said.

"George was brave - he took them on, and he's not even a foot high," Gay told The Associated Press. "He jumped in on them; he tried to keep them off. If it wasn't for George, those kids would have copped it."

One of the children, Richard Rosewarne, 11, was quoted in the Taranaki Daily News on Wednesday as saying George fought with the pit bulls to keep them off his 4-year-old brother, Darryl.

"George tried to protect us by barking and rushing at them, but they started to bite him - one on the head and the other on the back," Rosewarne said. "We ran off crying and some people saw what was happening and rescued George."

At the time, some of the children appeared in an AP photograph. After George died, the two pit bulls were euthanized. However, that wasn't the end of this story.

On May 18, 2007, the AP reported that George received two honors after his death. New Zealand's main animal welfare agency, the Society for the Protection of Animals, awarded George with a bravery medal. On top of that, an American Vietnam veteran who had read the news of George's actions to protect the children sent one of his Purple Heart medals to George's owner:

"It was an extraordinary act of heroism," said the animal protection society's chief executive, Robyn Kippenberger. "It says a huge amount for the animal-human bond that he actually went in to save them."

Kippenberger said her group's award, normally given to humans for bravery in aiding animals, "has not been awarded to a dog since 1990." The two previous canine recipients were trained police dogs.

"That he weighed into a couple of dogs considerably larger than himself, clearly to protect a child, is just a most amazing act and needs to be recognized," she told the Associated Press. The bravery medal will be presented to George's owner at the children's school.

Meanwhile, former U.S. Marine Jerrell Hudman told the local Taranaki Herald newspaper that he would honor the terrier's bravery by mailing to New Zealand one of the three Purple Heart medals he was awarded for service in Vietnam in 1967. Hudman, 58, of Austin, Texas, described George as a "little warrior" who deserved the honor.

A YouTube video showed the site of a statue where George is remembered in Manaia, which could also be viewed on Google Maps Street View. According to pictures on Google Maps, the words on the plaque were updated sometime between 2010 and 2013:

In the July 2020 video, the updated plaque on the statue read: "In memory of 'George,' who gave his life on April 29, 2007, protecting children from two savage dogs. He was posthumously awarded the PDSA Gold Medal, in recognition of his bravery."