Did George Soros Say His Life's Mission Is to Destroy the United States?

There is no evidence that the billionaire supporter of progressive causes ever uttered such a remark, or anything resembling it. 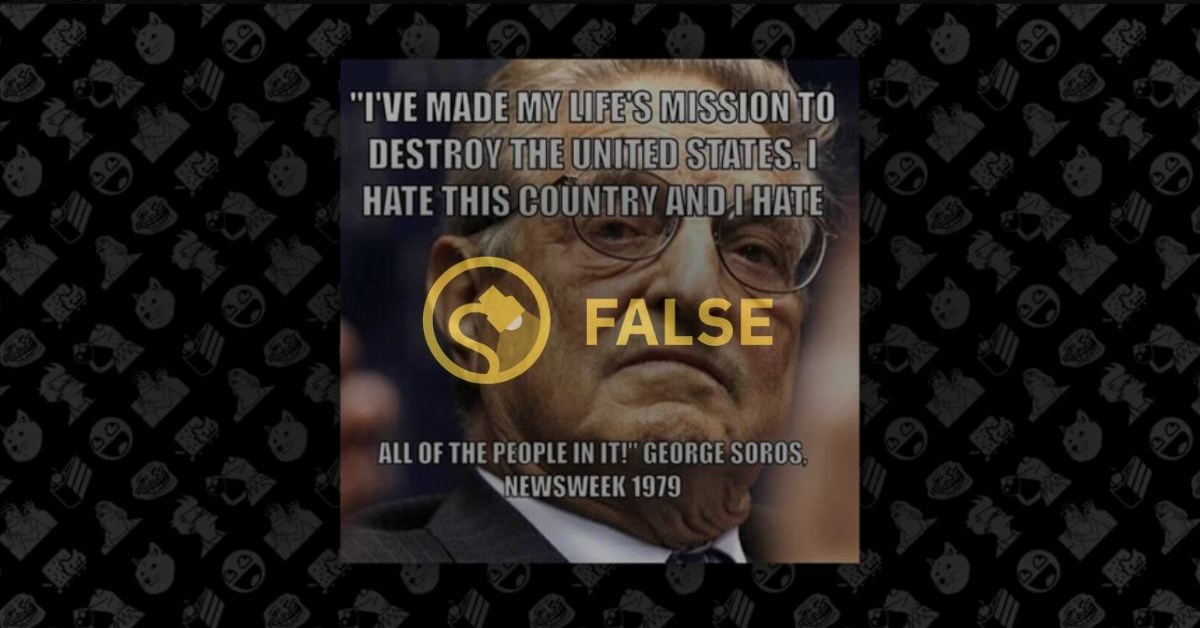 Claim:
George Soros said "I've made my life's mission to destroy the United States. I hate this country and I hate all of the people in it."
Rating:

Billionaire philanthropist George Soros is reviled in right wing circles — not, of course, because of his vast wealth, which he earned as a good, old-fashioned capitalist, but because of how he spends it, i.e. on progressive social and political causes.

He has therefore found himself the target of innumerable derogatory rumors and memes, most portraying Soros as a sort of mad "puppet-master" throwing his money behind "subversive" groups and candidates to achieve his master plan of reducing America to ruin.

How do they know that's his master plan, you ask? Well, because he announced it, supposedly, and on more than one occasion. A quote attributed to Soros making the rounds since mid-2017 unambiguously conveys his supposed hatred of America and Americans:

"I've made my life's mission to destroy the United States. I hate this country and I hate all of the people in it.' George Soros 1979 pic.twitter.com/vzUaihrHV8

Curiously, despite the claim that the remark was published in an unspecified issue of Newsweek 38 years ago, we've found no evidence that this quote existed at all prior to 2017, when it suddenly sprang up, fully formed, on social media. There are no cites, no mentions, no paraphrases, nor even any critical reactions to the obviously fabricated statement in any published source over those entire four decades.

We did find what you might call a variant of the quote that's several years older: "Destroying America will be the culmination of my life's work."

American Revolution: No Crying Allowed https://t.co/Awef5a4 “Destroying America will be the culmination of my life’s work.”~ George Soros.

The link in the above tweet goes to an August 2011 Breitbart.com article warning of "a looming breakdown in our society" that the author blames on Soros and "veterans and decedents of the Radial [sic] Left from the 1960s" (emphasis in the original):

These are terrible ingredients — a volatile mixture sitting dangerously close to open flames. There are those who wish to do nothing more than to fan these flames. “Destroying America will be the culmination of my life’s work.”~ George Soros. In their twisted view, in order to create a New America, the old one must be destroyed and erased. These are the veterans and decedents of the Radial Left from the 1960’s. Others are merely useful idiots in this plot who have fallen victim to the visions of utopia of a completed society of equals in every way imaginable: equal in squalor; equal in misery.

The quote appears to have first surfaced around 2010, when it enjoyed great popularity on far-right blogs and web sites, some of which cited a newspaper called The Australian as its source. This example is from The American Jingoist, 28 July 2010 (emphasis in the original):

My point here is that Soros is an EVIL planetary parasite. His grasp, greed, and gluttony have a global reach.

But what about America? Soros told Australia’s national newspaper “The Australian” “America, as the centre of the globalised financial markets, was sucking up the savings of the world.

As you probably noticed, there are actually two versions of the quote cited in that passage, one in which Soros supposedly said destroying America would be the culmination of his life's work, and the other in which he supposedly said the world financial crisis was the culmination of his life's work. Notwithstanding the disparity, both versions were very popular in right-wing media around that time, we found.

What Soros actually said in his 2009 interview with The Australian was this:

Peter Wilson: I am interested in how you keep track of so many issues and areas. Is your information structure different from other major investors? Do you place more emphasis on geopolitics than most?

George Soros: No. If anything I probably get less information than most people because I tend to focus on what I consider to be the salient features and neglect the less important so it is more by process of triage that I work.

So people bring things to your attention if they think a situation is developing in a region or a market?

I read the newspaper, I have some financial services that I also look at. I’m not on top of the financial markets. I just don’t have adequate information on detail so I can only use blunt instruments that are sort of macroeconomic instruments. On the other hand, I am tremendously involved in policy issues and that is where I am focusing.

The financial crisis, and how to solve it. It was not something that I was particularly concerned with prior to the rise of the crisis and I am also involved in the activities of the (Soros) Foundation.

But for the past 18 months you have been keeping an eye on the markets?

Yeah but I have also been writing a lot more than I was writing before because the crisis really stimulated me. I wrote a series of articles in the course of the year, I wrote a book, I published a book and I’m just about to publish a sequel to last year’s book, bringing it up to date, I am just working on it now.

So do you have a sense that things are coming together for you now?

It is in a way a culminating point of my life’s work, so to speak.

So do you have a sense that things are coming together for you now?

It is in a way a culminating point of my life’s work, so to speak.

Everything is coming together.

Yeah, the American election, the financial crisis, the theory of reflexivity. So it is actually a very stimulating period.

Just as well you didn't retire ten years ago.

Our first takeaway from the above is that nowhere in the interview did George Soros say anything remotely resembling "Destroying America will be the culmination of my life's work." That statement is obviously a fabrication.

Soros: On the other hand, I am tremendously involved in policy issues and that is where I am focusing.

Soros: The financial crisis, and how to solve it.

That, plus writing books, running his foundation, and involving himself in American electoral politics were the specific activities Soros mentioned before describing that moment in time as "a very stimulating period" and a "culminating point" in his life's work.

We would observe, in closing, that if destroying the United States was his aim and 2009 marked the culminating point of his efforts to do so, they were a miserable failure by any measure.

The American Jingoist.  "Destroying America Will Be the Culmination of My Life's Work."   28 July 2010.