George Carlin: 'Rights Aren't Rights If Someone Can Take Them Away'

A quote from the late comedian was widely circulated after the U.S. Supreme Court overturned Roe v. Wade. 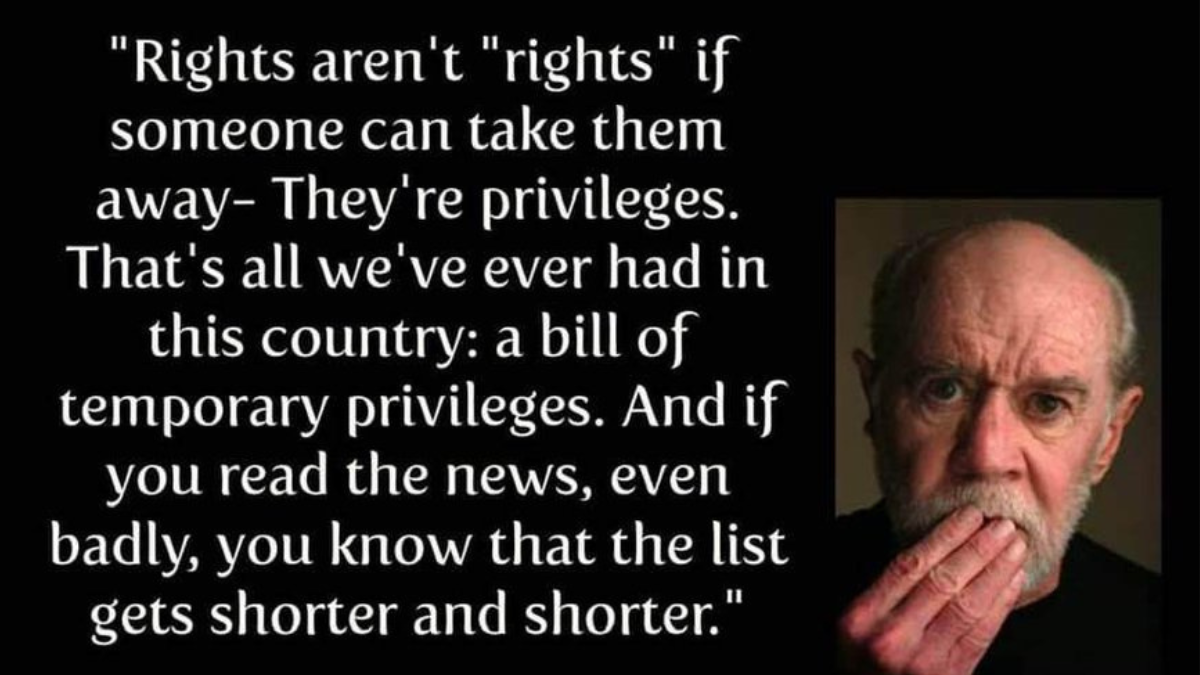 Claim:
Comedian George Carlin once said: "Rights aren't rights if someone can take them away. They're privileges. That's all we've ever had in this country is a bill of temporary privileges."
Rating:

On June 24, 2022, the U.S. Supreme Court overturned Roe v. Wade and ended a women's constitutional right to an abortion in the country. As politicians and social media commentators weighed in on the decision, a quote from comedian George Carlin started to circulate: This is a genuine quote from Carlin.

The statement — "Rights aren't rights if they can be taken away. They're privileges. That's all we've ever had in this country: A bill of temporary privileges. And if you read the news, even badly you know that the list gets shorter and shorter" — comes from Carlin's 2008 comedy special "It's Bad for Ya!"

Carlin can be seen speaking these words at the 7:50 mark of the following video.

Carlin often talked about politics during his stand-up routines. In fact, he spoke directly about abortion rights during his 1996 show HBO special "Back In Town." Carlin said during that special:

“Pro-life conservatives are obsessed with the fetus from conception to 9 months. After that, they don’t wanna know about you. They don’t wanna hear from you. No nothing! No neonatal care, no daycare, no Head Start, no school lunch, no food stamps, no welfare, no nothing. If you’re pre-born, you’re fine, if you’re preschool, you’re fucked.”

Here's a clip from that special:

The Supreme Court's decision to overturn Roe v. Wade means that the matter of abortion will now be left up to individual states. Because several states had "trigger laws," or prohibitive abortion laws that would go into effect almost immediately after Roe was overturned, abortion is now or will soon be banned in more than 20 states. NPR reported:

Twenty-two states have laws in place that will immediately ban abortions or pave the way to ban or severely restrict access to them, following the Supreme Court's historic decision Friday to overturn Roe v. Wade. This is according to research from the Guttmacher Institute, a group that favors abortion rights. Several additional states appear likely to enact new restrictions.

In his concurring opinion, Supreme Court Justice Clarence Thomas noted that the high court may reconsider other cases, such as Griswold and Obergefell, which respectively codified rights to contraceptives and to gay marriage. Politico reported:

Justice Clarence Thomas argued in a concurring opinion released on Friday that the Supreme Court “should reconsider” its past rulings codifying rights to contraception access, same-sex relationships and same-sex marriage.

The sweeping suggestion from the current court’s longest-serving justice came in the concurring opinion he authored in response to the court’s ruling revoking the constitutional right to abortion, also released on Friday.

You can read more of Snopes' coverage on the impact of the Supreme Court's decision in the thread below: