Is This 'Gentleman’s Guide to Amputation' Authentic?

The final step in this infographic is sharing a brandy with the newly amputated patient. 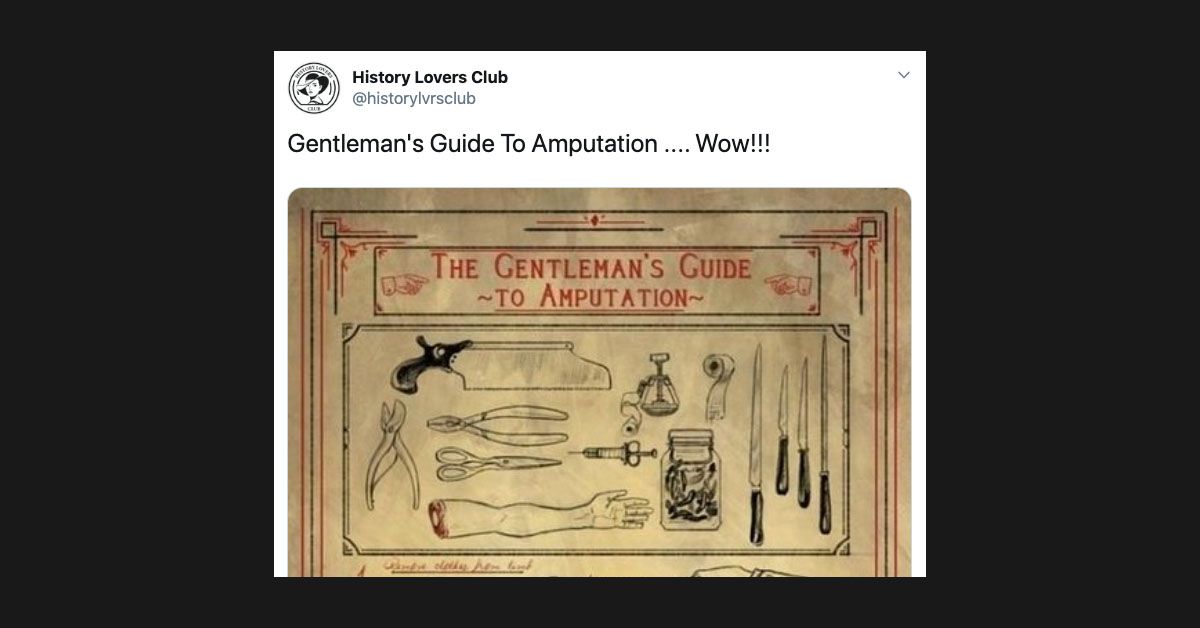 Claim:
An infographic describing how to amputate a gentleman’s arm is a genuine historical document.
Rating:

Since 2011, internet users may have encountered a darkly humorous and macabre infographic titled “The Gentleman’s Guide to Amputation.” It's a popular graphic that does well on social media, but “historical photo” social media accounts have repeatedly published it without context. For example, the popular (but frequently debunked) Twitter feed History Lovers Club has posted the graphic at least five times since March 2017, most recently on Sept. 11, 2019:

The image is not a historical document but a piece of art created by an artist who goes by the online handle “Onorobo.” Posting the image to Tumblr on Oct. 11, 2011, Onorobo described it as “an info-graphic I drew for class.” That being said, the picture does, for the most part, accurately reflect 19th-century surgical practices. Here is an infographic titled “Methods of amputation at the upper and lower arm” created by the French medical illustrator Nicolas Henri Jacob in the 1830s, courtesy of the Wellcome Trust digital collections: Dark humor about the process that centered around the need for alcohol would also not have been out of the question. Here, also from the Wellcome Trust, is a 1902 cartoon titled (from French) “We can rest a little,” showing a surgeon having some chilled champagne mid-way through a painful amputation: As the graphic at issue was made in 2011, however, claims that it is a historical document are false.

Wellcome Collection.   “A surgeon apologetically takes a breather during an amputation operation: a bottle of champagne waits in a cooler; a doctor and nurse canoodle while the patient screams. Colour process print after J.-A. Faivre, 1902.”     Accessed 12 September 2019.