A meme reproduces a former general's comment about President Donald Trump's announcement that the U.S. would be withdrawing from a nuclear deal with Iran. 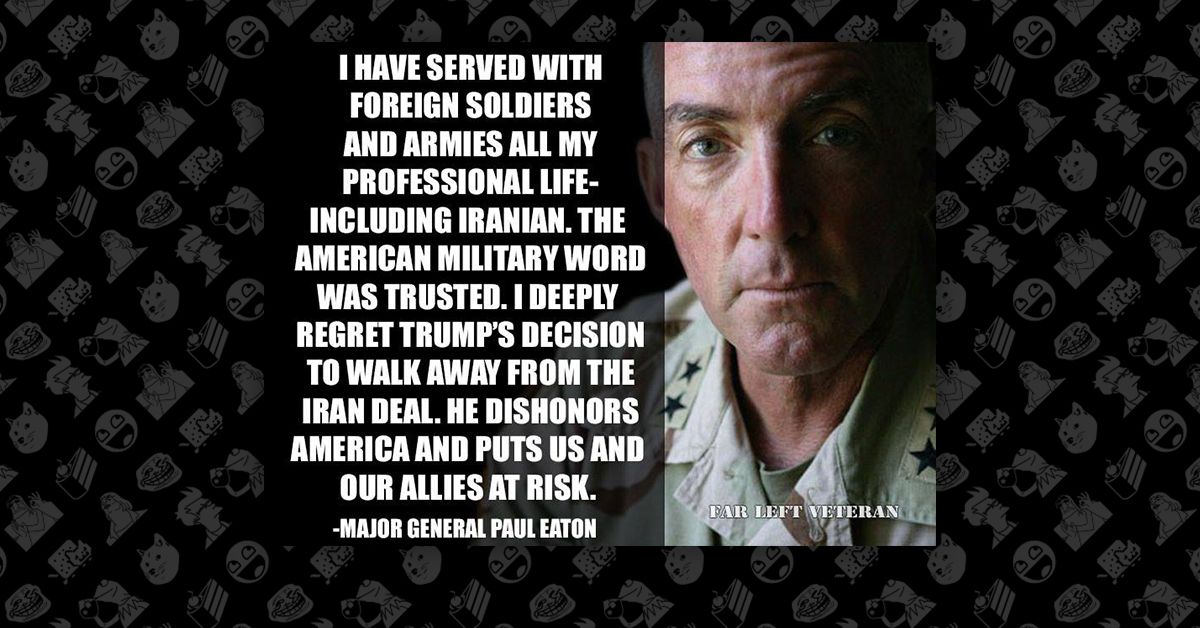 On 8 May 2018, U.S. President Donald Trump announced his administration's plans to withdraw the U.S. from an Obama-era nuclear deal with Iran. Shortly afterwards, the Facebook page "Far Left Veteran" shared a meme with a related quote attributed to Major General Paul D. Eaton: Maj. General Eaton is a retired U.S. Army officer who commanded operations to train Iraqi troops during Operation Iraqi Freedom in 2003-04 before returning to the U.S. to become Deputy Chief of Staff for Operations and Training, United States Army Training and Doctrine Command, Fort Monroe, Virginia.

That Eaton made the comment attributed to him above is documented by his verified Twitter account, where he posted that comment on the same day President Trump announced his intentions to withdraw the U.S. from the Iran deal:

I have served with foreign Soldiers and armies all my professional life - including Iranian. The American Military word was trusted. I deeply regret @realDonaldTrump decision to walk away from the Iran Deal. He dishonors America and puts us and our allies at risk. #IranDeal

In a statement published on VoteVets.org, the major general provided additional opinion on the issue:

By decertifying the Iran deal, and putting the question of new sanctions before Congress, Iran will now consider restarting its nuclear program. Should Congress reinstitute sanctions, Iran will undoubtedly speed towards nuclear weapons, putting us on the path to war. If Congress inserts new triggers for sanctions, Iran will likely consider whether staying in the deal is worth it, at all. At the same time, North Korea now knows that any deal signed by the United States is not worth the ink it is written in, when it comes to Donald Trump. That chops diplomats off at the knees, as they struggle to find a non-military solution to the crisis in Korea. It moves us closer to nuclear war with North Korea.

In short, today Donald Trump has put us on the path to two new wars, with nuclear weapons. We are very much less safe today, than we were yesterday. The path we are now on – massive loss of human life, on the scale of millions – is not a positive development for America, or humanity. We implore Congress to step in, and rein in this president.