Is This a Picture of Gay Lions Mating?

A photograph of mating male lions that raced around social and news media may not be exactly what it appears to be at first blush. 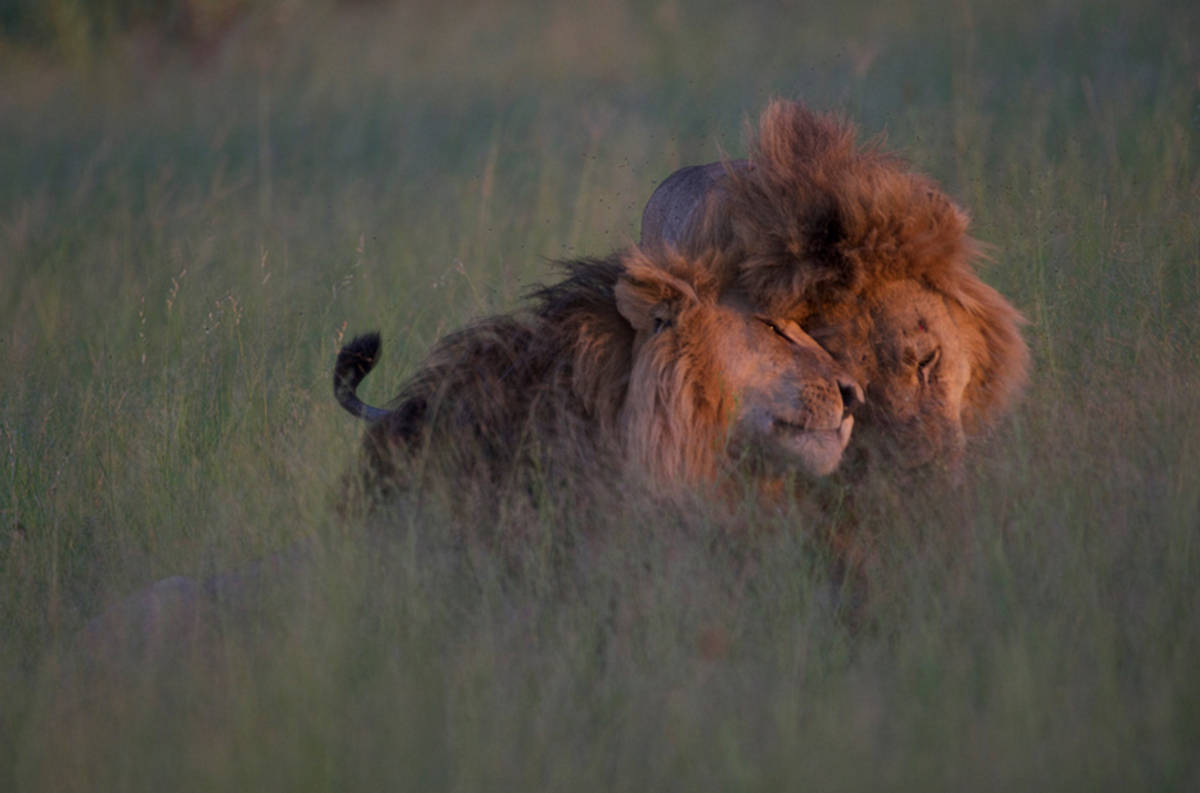 Claim:
Photographs and videos show a pair of gay lions having sex.
Rating:

Same-sex coupling appears throughout every animal species, but only seems to be controversial (or really of interest) to humans.  When photographer Nicole Cambré caught two male lions mating, the images she took spread across news and social media like wildfire:

Just saw The Gay Lions and my life will never be the same!!!! https://t.co/3VOjrjQMcT pic.twitter.com/nd3blYRvcr

But not so fast — National Geographic says that it's possible that the lighter-maned lion is actually a female (albeit an unusual one):

The lion on the bottom is more than likely a female African lion with a mane, a type of animal regularly seen in northern Botswana, where Nicole Cambré recently photographed the lions on safari.

One of the photos shows the two animals rubbing their heads against each other, which is not unusual behavior for males as part of a dominance display, notes Kathleen Alexander, an African lion expert and professor at Virgina Polytechnic Institute in Blacksburg.

As for the mating, "I’ve never seen male-to-male interaction like that, and I’ve been working [in Botswana] for 20 years," she says. "I would say it's more likely a maned lioness."

Cambré released a video that she said supports her assertion, and that both lions had equipment clearly showed they were male.  In that vein, Washington Post interviewed an African lion expert who says yes, they were male, but no, they weren't mating after all:

The mounting she captured is rarer and, Packer noted, “more persistent than I’ve ever seen in the wild.” But, he said, male lions sometimes do that when they seem nervous about an encroaching coalition. Or they might be in the mood when there aren’t available females around. Cambré noted that a nearby lioness appeared to be pregnant, which would make her unavailable.

“If there was a receptive female that would wander up about that point, they would stop that,” said Packer, who compared the lions’ mounting to a dog humping a human’s leg.

But Packer said it’s not “mating,” as some headlines declared. To be specific: Lions let out a “distinctive yowling noise” when they finish the deed, Packer said, and that didn’t happen in Cambré’s videos.

What does all this say about the nature of homosexuality, including in humans? Probably not much, Packer said. But that hasn’t stopped people from holding up animals’ sexual behavior to make a point about human sexuality, often with political ends.

It also says that while it's probably never a good idea to overanthropomorphize animal behavior, it's clear that leonine relationships, like their human counterparts, are complicated.