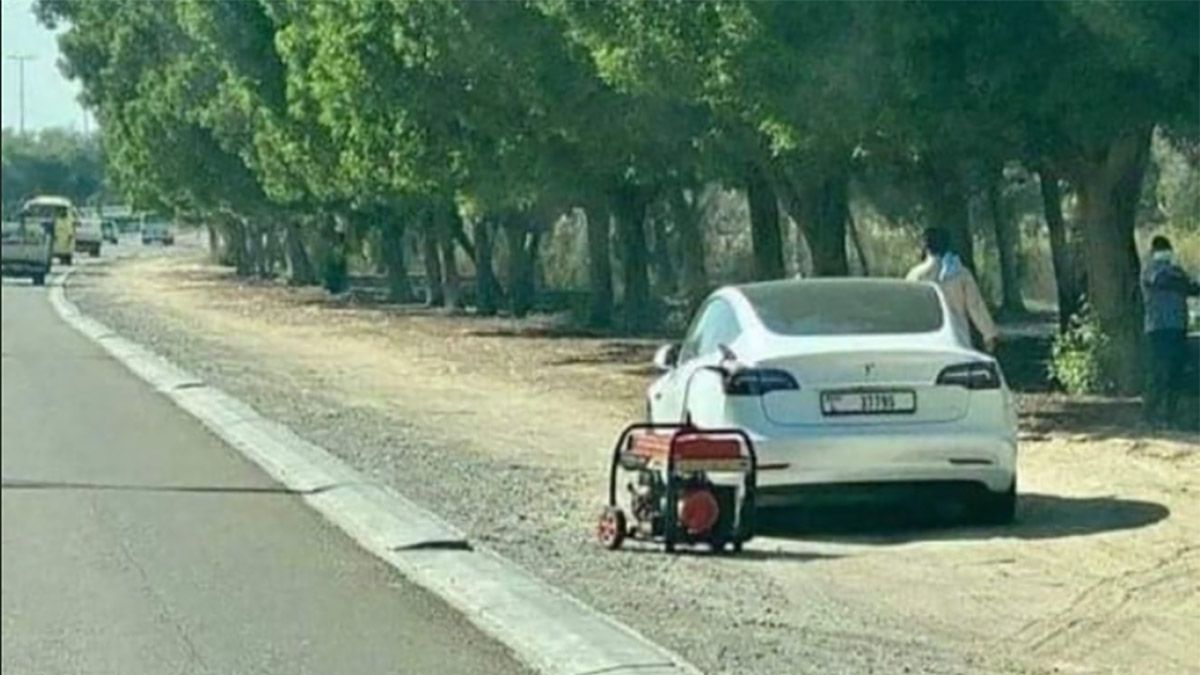 This picture of a Tesla supposedly with a dead battery being charged with a gas generator was not shot in the United States. (Image Via Imgur)

Claim:
A picture of a road lined with trees shows a Tesla charging with a gas generator in the U.S.
Rating:

On Nov. 7, 2021, the Twitter account Thinking Patriot tweeted a photograph of a Tesla car that appeared to be in the process of charging using a gas generator. It also appeared on Facebook.

This claim might remind readers of a previous fact check about a picture that purportedly showed a "diesel car charging station" for electric cars.

The photograph in question shows a Tesla, a fully electric car, and likely a gas generator on the side of a tree-lined road:

The user, who claimed to be based in California, tweeted "welcome to 2021" and included a hashtag for the Green New Deal, a proposed plan that is mostly about addressing climate change.

We also found a Reddit user who believed the picture was shot in a "hillbilly red state that refused funding for EV charge stations."

The tweet in question may have been an attempt to make fun of the very real climate crisis, which is a non-political, science-based issue that for decades has been discussed by those in opposition to reality as if it's a matter of personal opinion.

On Oct. 30, 2021, The Associated Press (AP) reported on the dire nature of the current situation:

World leaders are gathering in Scotland to try to accelerate the fight to curb climate change. So far, it’s not working, as the world keeps getting hotter and its weather more extreme, scientists and government officials say. They don’t have to point far back in time or far off for examples.

The Green New Deal is mostly supported by a number of Democratic politicians. As AP reported in 2019, some "GOP lawmakers denounced the plan as a radical proposal that would drive the economy off a cliff and lead to a huge tax increase."

In reality, the photograph was not captured in the United States. We found some Imgur and Reddit users who believed it was shot in either Nigeria or Syria. The license plate appeared to match the style used in the United Arab Emirates, possibly in Dubai, as Reddit users pointed out. Whatever the case, it's clear that the picture was not taken in North America.

A Reddit user commented on the picture, posting: "Sometimes I use an ELECTRIC battery charger to start my truck. What's your point?"

Another person responded: "I agree with you. If the battery on the car is dead and it’s 100% electric you have to charge the battery somehow. This is probably the only option. People run out of gas while driving. This is no different. The Facepalm is running out of battery, not using a gas generator to charge an electric car [Tesla]."

While this photograph was not shot in the U.S., we did find a similar one that was. It also showed a Tesla car and what looked like a gas generator.

According to Google Maps, as of November 2021, there are Tesla Supercharger stations near this location in Vancouver, Washington. However, it's unclear if those stations were there when the picture was taken.

We did not find the second picture being used in any political memes.

Can a Gas Generator Charge a Tesla?

As for the separate question of whether a gas generator could add battery life to a Tesla vehicle, one YouTube account put the idea to the test. The Fast Lane Car channel posted a video that showed the process might be quite complicated.

According to the conclusion of the experiment, the person was able to add around 12 driving miles to the car by pouring a single gallon of gas into a generator. It took about three hours. Those extra miles might be enough to make it to a nearby Tesla Supercharger station for the very small number of drivers who might ever be stranded with an empty battery.

In sum, a picture of a Tesla car being charged with a gas generator was shared as if it had something to do with American politics. While we did find a completely different photograph that was shot in the U.S., the picture in question wasn't even captured in North America. Further, in a general sense, a single photograph of one example of anything does not represent the reality of an entire subject.