Is Gasoline Cheaper Under President Obama?

Whether or not they have ties to the oil industry, U.S. presidents have little control over the price of gasoline. 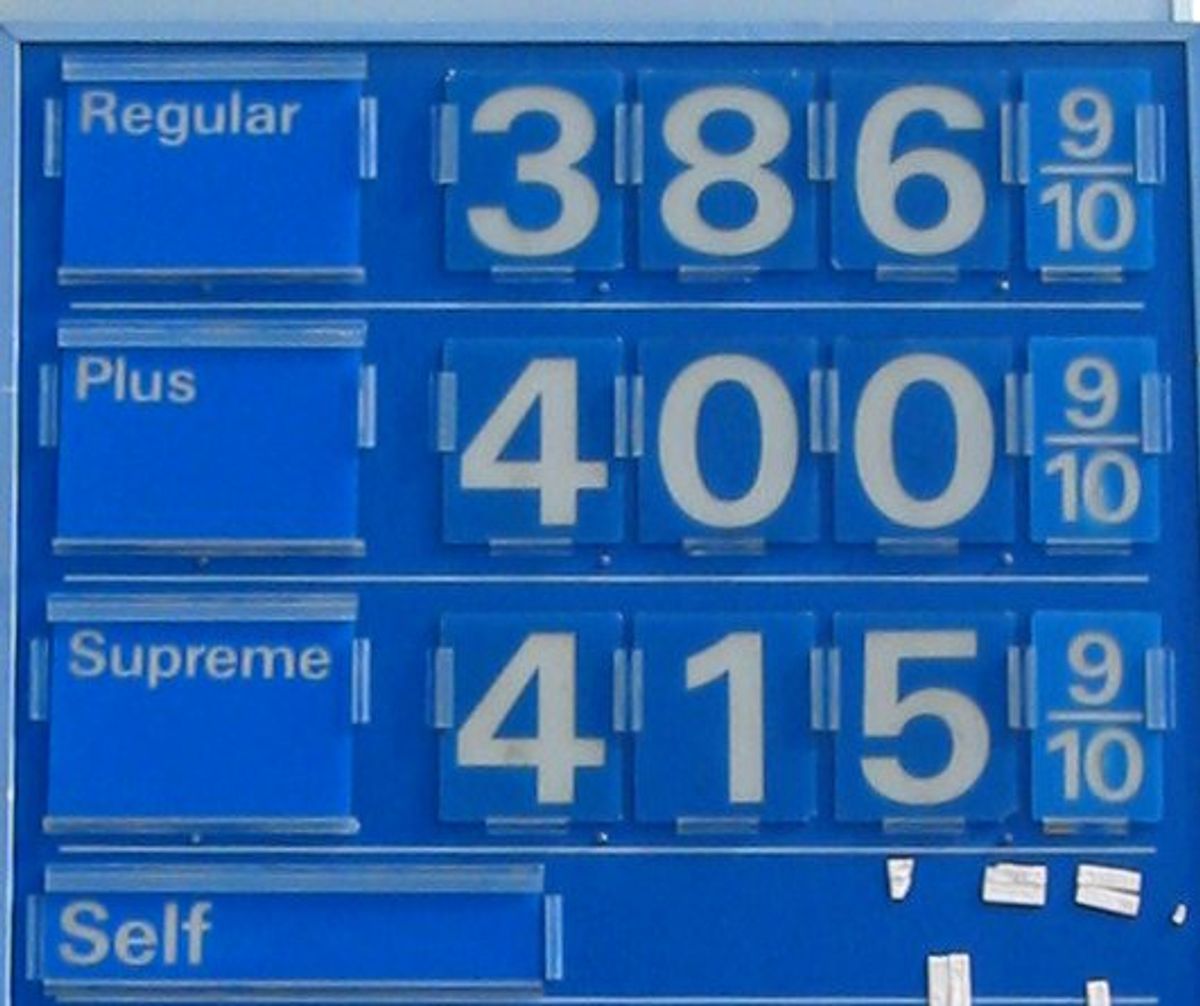 Claim:
Gasoline prices have been dramatically lower during the Obama administration than the Bush administration because Obama has no ties to the oil and gas industries.
Rating:

President Bush’s family has strong ties to the oil and gas industry whereas President Obama has relatively none; average national gasoline prices did spike to over $4.00 per gallon at one point during the Bush administration.

Retail gasoline prices were actually lower during most of the Bush administration than they have been under President Obama; although presidents can set domestic and foreign policy that can have a long-term effect on crude oil prices (such as President Obama’s encouragement of the American shale oil industry), America’s dependence on foreign oil means that domestic gasoline prices are more affected by the machinations of Saudi Arabia and OPEC than they are on what an individual president does.

The meme shown above about gasoline prices during the last two presidential administrations started circulating in liberal Facebook circles in November 2015. There are really four claims to examine: (1) Has the Bush family been "running oil companies for 50 years"?, (2) Is President Obama free of ties to the oil and gas industry? (3) Are the gasoline prices shown in the meme really reflective of the actual prices during each president's administration?, and (4) Can a president’s actions really have much impact on gasoline prices, or are other factors the driving force behind how much we pay?

Let’s take each of these in turn:

President George W. Bush and his family's ties to the oil and gas industry:

Oil: The Bushes' ties to John D. Rockefeller and Standard Oil go back 100 years, when Rockefeller made Buckeye Steel Castings wildly successful by convincing railroads that carried their oil to buy heavy equipment from Buckeye. George H. Walker helped refurbish the Soviet oil industry in the 1920s, and Prescott Bush acquired experience in the international oil business as a 22-year director of Dresser Industries.

Back in 1999, when George W. Bush was still governor of Texas, CNN reported that the younger Bush's early oil investments were primarily tax shelters for the rich begun after he started in the Texas oil business subsequent to graduating Yale University and Harvard Business School. Wealthy family friends and others invested millions with him but with poor results: A 1985 disclosure shows Bush's track record was that investors got back only 45 cents on the dollar, although few complained. Investors also got tax deductions averaging more than 80 cents on every dollar invested.

According to OpenSecrets.org, a website which tracks campaign contributions and spending, President Bush's 2004 campaign received $2.9 million from the oil and gas industry, ranking oil and gas as fourteenth among the top 20 industries contributing to his campaign. Although this is a significant sum, other industries contributed more. His top three donors were retirees ($23.1 million), lawyers and law firms ($11.7 million), and real estate ($11.3 million).

President Barack Obama's Ties to the Oil and Gas Industry:

Neither Barack Obama nor his family have any known ties to the oil and gas industry. According to OpenSecrets.org, no oil and gas companies were listed among Obama’s top 20 contributors, either individually by company or collectively by industry. Interestingly, when listed by "industry," the top contributors to his campaign were retirees (donating $53.4 millon), followed by lawyers and law firms ($27.7 million) and education ($22.6 million).

However, President Obama is not entirely free of donations from the oil industry. According to a Politico article published in May 2012, Obama's 2012 re-election campaign had at that time received $772,000 from employees of some of the largest energy companies, including Exxon-Mobil, BP (British Petroleum), and Exelon. The article noted that this amount was less than half of the $1.8 million Republican opponent Mitt Romney had received to date, and it also didn't specify what percentage of those contributions might have come from the "clean" energy industries such as solar and wind energy. Since Obama has been seen as clean energy-friendly, presumably some of those “energy industry” contributions came from employees of clean energy companies. Thus, it’s unknown how much of the $772,000 total contribution from the energy industry was attributable to employees of oil and gas companies.

Overall, it appears true that the Bush family has significant business and financial ties to the oil and gas industry, while Obama has relatively few.

Gasoline prices during each President's Administration:

When President Bush first took office in January 2001, national gasoline prices were averaging $1.51 per gallon. Gasoline prices pretty much bumped around in that sub-$2.00 range until March 2005, after which prices climbed above $2.00 per gallon and increased slowly but steadily until they hit their peak three years later in the summer of 2008. After that peak, though, gasoline prices fell pretty rapidly.

By the end of the Bush administration in December 2008, national prices were almost back to 2001 levels, averaging $1.71 per gallon. If President Bush were manipulating gasoline prices to enrich his family's coffers, he wasn't doing a very good job of it, since gasoline prices exceeded $2.00 per gallon for less than six months out of his eight year administration.

Now let's look at President Obama's experience with gasoline prices. At the time of his inauguration in January 2009, gasoline prices were averaging $1.90 per gallon. Prices climbed steadily after that, hitting a peak of $4.02 per gallon in April 2011. Prices have slowly diminished since then, but have never been below $2.00 per gallon since March 2009.

The prices shown in the meme must have been offered in a low-cost state and/or during the early months of Obama's administration. Thus, despite President Obama's lack of ties to the oil industry and his push to increase domestic oil production and support clean energy technologies, gasoline prices have, on average, been higher during the Obama administration than during Bush's presidency.

Crude oil prices are driven those by those Econ 101 factors of demand and supply. According to the U.S. Energy Information Administration, world economic growth is the most significant factor affecting demand, and as worldwide population increases and developing nations increasingly turn to energy sources to fuel their economies, the global demand for oil also increases.

On the supply side, the middle-eastern OPEC (Organization of the Petroleum Exporting Countries) countries still produce 42% of the world's crude oil. Saudi Arabia, the big gorilla of petroleum-producing countries, alternates between flooding the market with crude oil and cutting back supplies, typically for strategies that have more to do with Saudi Arabian political and financial goals than a desire to impact American gasoline prices.

Saudi Arabia used to be the world's largest oil producing nation, but over the last decade, American oil production has grown because of the increased effectiveness of extracting crude oil from shale, and the United States now produces nearly as much crude oil as Saudi Arabia. However, extracting crude oil from shale is more expensive than extracting it from traditional sources. Because of this factor, Saudi Arabia has flooded the international market over the last year with low-priced crude oil in the hopes of squeezing the shale oil producers out of the market altogether.

According to CNN Money, crude oil prices were at $100 per barrel in November 2014 but have since tumbled below $30 per barrel. Readers old enough to remember the Arab oil embargo of 1973-1974 know that the opposite can also be true, when Arab members of OPEC imposed an oil embargo on the United States and sharply cut back on oil production because of America’s support of Israel during the Arab-Israeli War. Crude oil prices quadrupled, and all across the U.S., drivers waited in long lines at gasoline stations due to the resulting fuel shortage while gasoline prices soared. Inflation rippled throughout the American economy.

Refinery costs vary seasonally because of the different formulations required by a number of states to reduce pollution during the warm weather months. In addition, increased demand during the summer typically results in higher gasoline prices. As most Southern Californians know, gasoline prices also tend to increase when a refinery goes off-line in the spring or autumn for routine maintenance — or for unexpected disruptions, such as the Exxon-Mobil refinery explosion in February 2015.

At the retail level, the usual factors affecting any business' prices also affect gasoline prices: how pricey the real estate is that the gasoline station is sitting on, the price of labor in that jurisdiction, whether the station has a long-term contract to acquire gasoline from a distributor or is dependent upon short-term gyrations in prices, and competitive pressures from surrounding gasoline stations.

Gasoline taxes can vary from state to state and from city to city. Sometimes, large variations are seen within a relatively short geographical range. For example, New Jersey has a gasoline tax of 32.9 cents per gallon, while neighboring New York's is more than double that at 69.0 cents per gallon. Overall, refinery costs are responsible for 12% of retail gasoline costs, distribution and marketing costs 11%, and taxes 11%. As stated above, crude oil prices are responsible for the other 66%.

Despite America's recent increase in domestic oil production, the U.S. still relies on foreign oil, primarily from Saudi Arabia, for 40% of its gasoline needs. Although an individual U.S. president can set policy prescriptions that will ultimately affect gasoline prices in the long-term (such as President Obama’s encouragement of the shale oil industry to increase domestic production, or Congress’ recent agreement to allow domestic oil producers to sell their product overseas) much of the fluctuation in fuel prices is dependent upon the machinations and political goals of a Saudia Arabian potentate rather than an American president.

“What Consumers Pay for at the Pump 101,” American Fuel and Petroleum Manufacturers. http://education.afpm.org/refining/factors-affecting-gas-prices/