Can You Identify Chinese-Grown Garlic from Its Lack of Roots?

Some people claim garlic imported from China is identifiable by a lack of root material, but that's not always a reliable way to determine the product's origins. 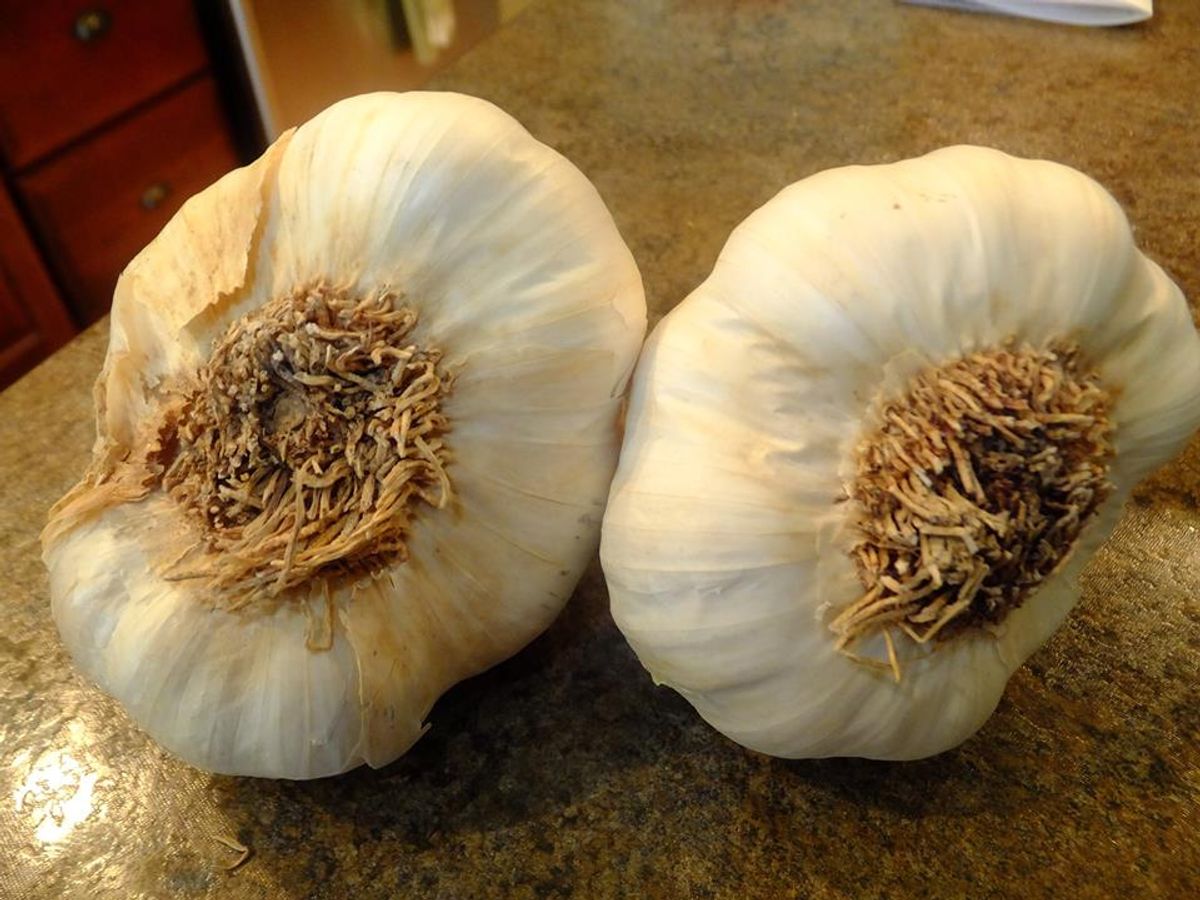 Claim:
You can easily identify garlic imported from China due to its lack of visible roots.
Rating:

In October 2015 a warning about garlic imported from China (and how consumers might easily spot it) was posted to Facebook, and the blog of social media pseudoscience guru David "Avocado" Wolfe published a related article titled "RED ALERT: THIS IS HOW YOU SPOT HARMFUL BLEACH AND CHEMICAL LADEN GARLIC FROM CHINA":

China is putting California garlic growers out of business, and YOU can stop it. Less than ten years ago, all of our garlic was grown in this country, primarily in CA. Now less than 40% is grown here and most of it (60%) is coming from China.

You can tell the difference by looking at the bottom. If the roots are all removed, leaving a concave, clean spot, it is Chinese. This is required by the Ag Dept. to prevent soilborne plant diseases from entering our country. If the roots are still there, as shown below, it is California garlic. The Garlic Growers Assoc. says not one single US grower cleans out the root end.

Is there a difference in quality? Yes, CA garlic routinely scores a higher BRIX scale rating (sugar content) than Chinese and Chinese garlic is noted by chefs for its metallic bitterness. Both missives claimed (as illustrated by the photographs shown above) that all garlic grown in China lacked roots and a stem, and all American-grown garlic retained that material. According to the Facebook post, the "Ag Dept." mandates the removal of roots in order to inhibit the spread of agricultural pathogens from China, while Wolfe's blog posited that the roots were removed for an entirely separate reason (i.e., shipping costs): "If it has roots and a stem, it is safe. China will cut these off before they ship them to save weight."

The notion that garlic's country of origin can be determined solely by the presence of lack of root material wasn't new in October 2015, as a July 2012 blog post cited a consumer affairs representative at garlic company Christopher Ranch as a source of the former claim:

Unfortunately it appears you cannot trust all of the stores to be honest about where the garlic comes from. The garlic shown below was being sold at Sunflower “Farmer’s Market” in Roseville, CA. I have been advised by the consumer affairs department at Christopher Ranch garlic, the largest garlic company in the United States, that there are NO American growers that pay the extra expense to have the roots removed from all of their garlic as it is not legally required for American grown products. Don’t you just love the little USA sign next to this garlic that has been processed in the way that only imported garlic is processed?

A 2009 blog post from Christopher Ranch claimed Chinese garlic "typically" lacked a root. However, the assertions conflicted visually with Christopher Ranch marketing materials (in which rootless bulbs of garlic were displayed):

Furthermore (as many Facebook commenters pointed out), garlic seen at farm stands and in local CSA (community supported agriculture) boxes often lacks a root despite the plant's origins. Nothing prevents any garlic grower in the United States from removing the root from their garlic, and many do (as evidenced by many photographs from random American farmers' markets).

According to a 2009 USDA report [PDF], about 50 percent of garlic sold in the U.S. is grown in China. However, the bulk of imported garlic (irrespective of origin outside North and Central America) is subject to the same regulatory guidelines (primarily concerning the exclusion of above-ground materials and allowing only for a dry bulb [PDF].

Wolfe's article also warned readers that garlic from China was sprayed with "HIGHLY TOXIC POISONS," followed by a photograph of a Chinese farmer ostensibly dousing garlic in poisonous pesticides: However, that image was a stock photograph of pesticide spraying "at the rice field in Dawu Village of Hechi City."

Some American-grown garlic lacks root material for a number of reasons, and an absence of that feature isn't proof positive garlic was specifically grown in China. Garlic origin can't be definitively proven via the presence of a root; and those who wish to consume only U.S.-grown garlic would do better to go by brand name (or purchase garlic from a local farmer's market or CSA outlet).