Gabapentin’s potential for abuse, especially in combination with opioids, may have been misjudged — but the drug remains safe for approved uses. 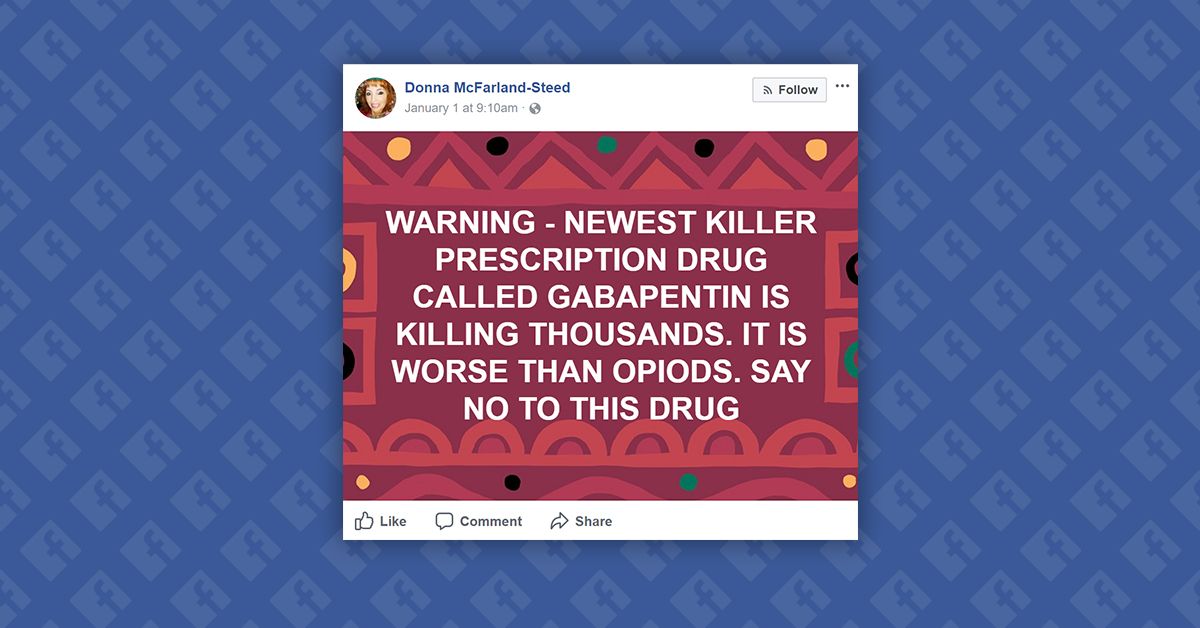 Claim:
Gabapentin is now considered the most dangerous drug in America and will surpass opioids as the largest prescription drug killer.
Rating:

On 28 June 2017, Kaiser Health News reported on an apparent increase in abuse of gabapentin (brand name Neurontin) in Ohio and across the nation in a story that saw wide syndication in USA Today, STAT News, and many other outlets:

Last December, Ohio’s Board of Pharmacy began reporting sales of gabapentin prescriptions in its regular monitoring of controlled substances. The drug, which is not an opioid nor designated a controlled substance by federal authorities, is used to treat nerve pain.

But the board found that it was the most prescribed medication on its list that month, surpassing oxycodone by more than 9 million doses. In February, the Ohio Substance Abuse Monitoring Network issued an alert regarding increasing misuse across the state.

The claims that gabapentin is "the most dangerous drug in America" gained widespread exposure thanks to a viral 1 January 2018 Facebook post that alleged, without sources, that gabapentin is the "newest" killer prescription. Claims that it is "killing thousands" appear to be based off this earlier reporting.

While abuse of the drug “on the street” may be a newer phenomenon, gabapentin has been around since 1993 as a treatment of epilepsy in the United States. In the European Union, the drug is approved to treat neuropathic pain as well. Controversially, the drug has been — and continues to be — used to treat a wide variety of unapproved conditions off-label.

The drug is not a narcotic like an opioid, and it has only an indirect effect on the central nervous system, making a direct overdose from the drug alone unlikely. A 62-year-old woman’s suicide, reported in a 2011 case study, claimed to be the first published report of a gabapentin overdose in combination with no other drugs — an outcome that confounded researchers. (There has since been at least one other gabapentin overdose reported in the absence of other drugs). The pharmacological and medical community have long considered the drug safe with few adverse effects.

This lack of concern about its adverse effects, more recent research alleges, may have masked the legitimate risk for the drug's potential for abuse. While a high from abusing the drug alone is reported to be mild, numerous case studies have indicated that opioid addicts find that gabapentin is able to increase the euphoric effects of an opioid high. Larger scale studies of opioid addicted individuals have confirmed this.

Increasing awareness of the link between gabapentin and opiod addicts lead the Ohio Substance Abuse Monitoring Network to issue a February 2017 warning, which partially inspired the original June 2017 reporting by Kaiser Health News, and included this first-person account of its use:

It’s not a narcotic, but what it does, is, it intensifies your methadone [an opioid]… so if you take your methadone and you go buy 10 [gabapentin pills] and you take all 10, it’s sort of like you tripled your dose.

Further confusion over the lethality of gabapentin, based on the comments in the aforementioned viral post, appear to stem from an in-depth analysis of drug overdose deaths in Kentucky in 2016 performed by FiveThirtyEight and published on 17 January 2018. That story ("There Is More Than One Opioid Crisis") indicated that 32.6 percent of all people who overdosed in Kentucky in 2016 had the presence of gabapentin in their system under autopsy, and that it was the most common drug found in some specific demographics:

According to the findings, gabapentin [...] was the drug most frequently detected in women who had died from drug overdoses and among victims over the age of 44.

Crucially, these data do not indicate that gabapentin caused these deaths, just that its presence was found during autopsy toxicology reports. These data, as well, do not indicate that gabapentin was the only drug found in the system of drug overdose victims. To further illustrate that point, THC, the active component of marijuana which is incapable of causing an overdose on its own, was detected in a quarter of cases, according to the same dataset; it is impossible to credibly argue that marijuana caused a quarter of overdose deaths in Kentucky in 2016. The fact that gabapentin was frequently found in combination with opiates in that report, however, lends further credence to the idea that the drug is being used as a way to enhance the effects of other more deadly drugs.

While the increasing prevalence of gabapentin abuse is an important finding and a vital step in understanding the complexities of the opioid epidemic, it is not a finding that should cause legitimate users alarm. To suggest that a drug which millions of people depend on is deadly and should be avoided at all costs, as the viral Facebook post suggested, is wholly irresponsible. Its potential for abuse was underestimated, but nobody is arguing that it is now more likely to cause death through an overdose on its own. As such, we rank this claim as false.