A gold miner was reportedly blasting a wall of frozen mud in Canada when he came upon the permafrost-entombed canine. 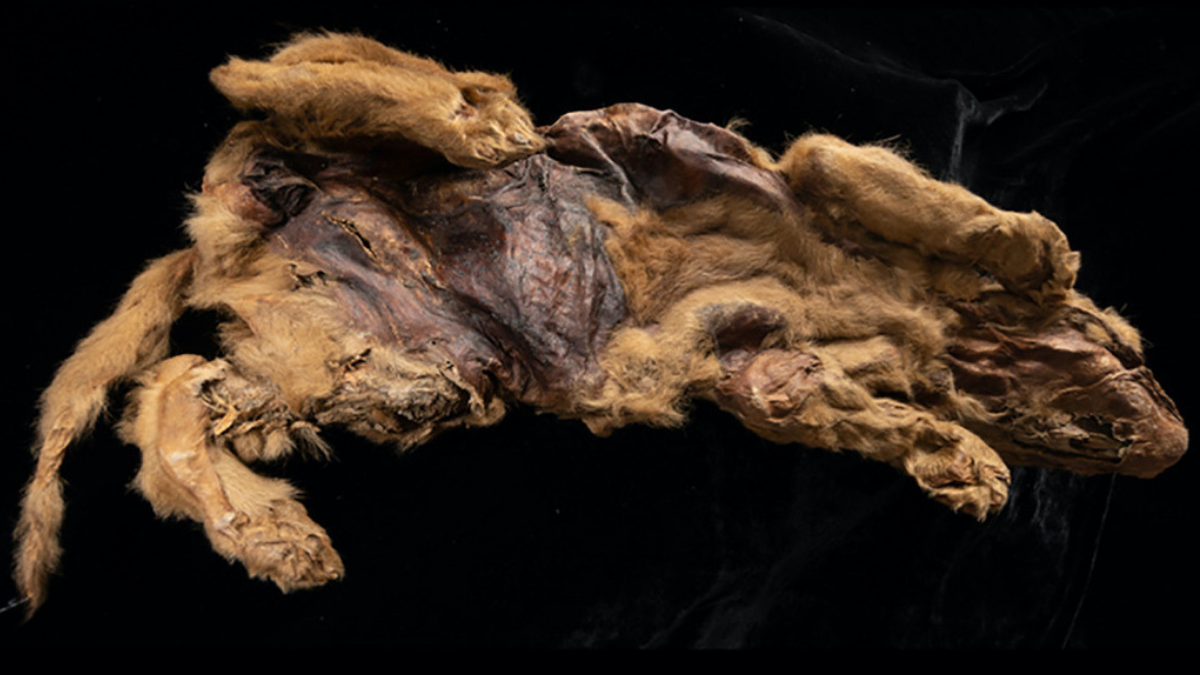 Claim:
At 57,000 years old, the world’s most complete wolf mummy — skin, fur, and all — was found in permafrost when a gold miner blasted a wall of frozen mud.
Rating:

In July 2016, a gold miner in the Klondike goldfields of the Canadian Yukon who was thawing frozen ground and mud to locate placer deposits came upon a much furrier, historically valuable discovery. Locked in the permafrost were the perfectly preserved remains of a wolf pup that had died an estimated 57,000 years ago. And in December 2020, researchers at Des Moines University characterized the world’s “most complete” wolf mummy in the scientific journal, Current Biology.

Now named Zhùr, which means “wolf” in the local language of the Tr'ondëk Hwëch people, the pup is believed to be a Pleistocene gray wolf who died at the age of about seven weeks. Zhùr was so well preserved at the time of her death that her skin, fur, and the papillae on her lips are all still visible.

"She's the most complete wolf mummy that's ever been found. She's basically 100% intact -- all that's missing are her eyes," said study author Julie Meachen, an associate professor of anatomy at Des Moines University in a news release. "And the fact that she's so complete allowed us to do so many lines of inquiry on her to basically reconstruct her life."

Zhùr measured just 14 inches long and weighed under 1.5 pounds. Morphometric, isotopic, and genetic analyses of the pup provided details of her appearance and evolutionary relationship to wolves — all of which contributed to understanding how the young canine died.

"It's rare to find these mummies in the Yukon. The animal has to die in a permafrost location, where the ground is frozen all the time, and they have to get buried very quickly, like any other fossilization process," said Meachen. "If it lays out on the frozen tundra too long it'll decompose or get eaten."

But how did Zhùr die? To find out, Meachen and her team first needed to determine how the pup lived.

As a mammal ages, its bones fuse together, helping researchers to determine an animal’s age. Radiographs of the canine’s skeleton showed that the epiphyses and epiphyseal plates (also known as the “growth plates”) located at the end of long bones had partially fused. By comparing it to the growth rate of a domestic dog, the researchers were able to determine that Zhùr was just under two months when she died. Based on the birthing cycle of modern wolves, it’s likely that her den collapsed in July or early August.

In order to determine when Zhùr died, researchers turned to radiocarbon dating, a method that analyzes the level of three carbon isotopes in an organic item — like a wolf mummy — and compares it to the amount of carbon in the atmosphere through geological history. In short, a mummy’s level of carbon isotopes will by and large match carbon in the atmosphere at the time of death. An analysis of Zhùr’s DNA from hair follicles and oxygen isotopes from tooth enamel suggests that she lived and died between 56,000 and 57,000 years ago.

A Contribution to Evolutionary History

Her DNA suggests that Zhùr likely descended from ancient gray wolves in Russia, Siberia, and Alaska. This evolutionary group, or clade, also includes individuals from Eurasia and North America, a finding that provides further evidence to suggest that the continents were connected during the Pleistocene epoch by way of a giant swath of ice known as the Bering Land Bridge. But because Zhùr’s DNA does not prove she is a direct ancestor of gray wolves in Canada today, it is thought that wolves in the area experienced at least one wave of regional extinction before being replaced by another subgroup.

Understanding Zhùr’s relationship to modern-day wolves helps to paint a bigger picture of her time on Earth. Using that information, the researchers analyzed her diet and determined it was heavily influenced by how closely she lived to the water. Her diet largely consisted of aquatic resources, particularly salmon. This particular area of the Klondike River where she was found is a spawning ground for king salmon and a feeding area for wolves of today.

Because the pup had a mouth full of teeth and was otherwise healthy at the time of her death, in addition to her high level of preservation, the scientists concluded that she likely died instantly when her den collapsed. But the discovery also presented as many questions as it did insights. Why was Zhùr the only wolf found in the den? What happened to her parents or siblings? Could it have been that she was an only pup, or was she the only one present when the den collapsed?

Answers to these questions may never be found, but viewing Zhùr has been made possible by the Tr'ondëk Hwëch'in people, who placed the pup on display in December 2020 at the Yukon Beringia Interpretive Center in Whitehorse, the capital city of Yukon.